On Wednesday, April 3, [words] Bookstore hosted an event with Harlan Coben to celebrate the soft opening of its new location in the Life Village of LifeTown in Livingston, New Jersey.

LifeTown, said [words] co-owner Jonah Zimiles, is a 53,000-square-foot center that aims to redefine the landscape for individuals with special needs with daytime activities at its recreational, therapeutic, and educational facilities. The center is currently still under construction; once finished, it will be open to the general public. 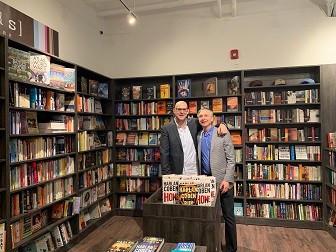 Zimiles, who is on the board of LifeTown, told Bookselling This Week that he and his wife, Ellen, were among the very first donors to the project. Over the past eight years, they have helped to raise the $16 million needed to build LifeTown. Zimiles has also been involved with the Friendship Circle of New Jersey, the organization providing programming at LifeTown, for over a dozen years, he said.

“Our son with autism has participated in and benefited greatly from Friendship Circle programs,” Zimiles said. “We have worked closely with the amazing couple Zalman and Toba Grossbaum, who run the Friendship Circle of New Jersey, and have provided input into the design of the building as well as the content of the activities at LifeTown.”

At [word] Bookstore’s Maplewood location, both Ellen and Jonah Zimiles have strived since 2009 to make their store a welcoming environment for people with special needs. They provide paid, on-the-job training for young people with disabilities to introduce them to real work experience by partnering with local schools to bring in young people who will soon be transitioning to the workplace.

When Zalman and Toba Grossbaum suggested opening a [words] Bookstore as one of the first stores in the Life Village of LifeTown, Zimiles said he and his wife “gladly accepted the challenge.”

Now, the store is preparing for its official opening. Zimiles told Bookselling This Week that [words] invited Coben to headline the soft launch event because, along with being an outstanding author, he has been a frequent speaker at and supporter of the store’s main location in Maplewood. Coben also attended high school in Livingston, New Jersey.

Approximately 250 people were in attendance for the ticketed event, where Coben appeared in conversation with New York Giants Hall-of-Famer Harry Carson. “Both of them were fantastic and entertaining,” Zimiles said. “We especially enjoyed it when Harry decided to run around the huge event space with a mobile mic rather than relying on the stationary mic for answering questions.”

“Carson did such a terrific job that I publicly offered him a position joining our team and working with our events manager, Carrie Harmon,” he added. “So far, I have not received a response to the offer, but we are keeping our fingers crossed.”

Overall, Zimiles said that [words] is thrilled to expand its vocational training program for young people with special needs to a new location, in addition to “[serving] as a draw for the general community in Livingston and neighboring towns to come visit LifeTown and our store in Maplewood.”

Watch Bookselling This Week for details regarding the grand opening of [words] Bookstore at LifeTown.