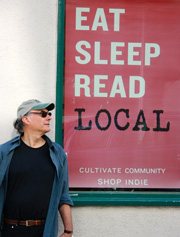 Please note: ABA does not gather sales or other statistics regarding the industry as a whole. For other questions, email media contact Dan Cullen.

Also see For the Record: Across the Country – Indie Bookstores are Vital and Healthy

American Booksellers Association and Libro.fm Partner for Sale of Digital Audiobooks Through Independent Bookstores (November 9, 2016)
The American Booksellers Association, the national trade group for independent bookstores, and Libro.fm, the digital audiobook provider, have announced a marketing partnership coupled with the integration of Libro.fm with hundreds of ABA’s IndieCommerce platform websites, enabling the convenient purchase of digital audiobooks. Customers now have an option to purchase digital audiobooks – as well as print and ebooks – while supporting their local, independent bookstore, and as an alternative to Amazon’s Audible.com.

Lena Dunham Named Spokesperson for Indies First (September 14, 2016)
The American Booksellers Association is pleased to announce Lena Dunham as the 2016 official spokesperson for Indies First, a national campaign of activities and events in support of independent bookstores that takes place on Small Business Saturday, the weekend after Thanksgiving.

Cheryl Strayed Announced as 2015 Indies First Spokesperson (September 16, 2015)
The American Booksellers Association is pleased to announce Cheryl Strayed, the bestselling author of Wild, Tiny Beautiful Things, Torch, and the forthcoming Brave Enough, as this year's official spokesperson for Indies First, a national campaign of activities and events in support of independent bookstores.