Banned Books Week is being celebrated in bookstores throughout the country from September 21 – 27 with special events, displays, videos, and more. 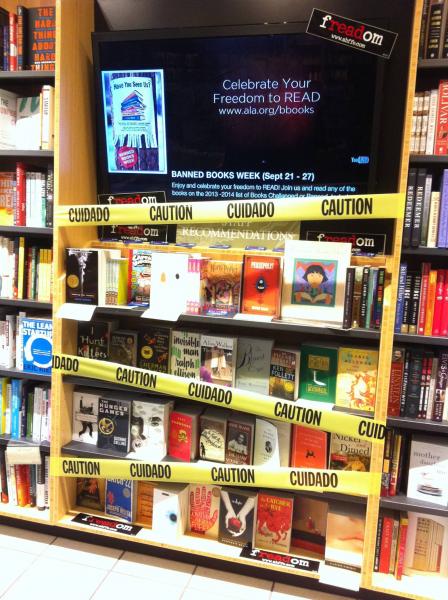 The Books Inc. display at the San Francisco airport.

To help kick off the festivities, on Friday, September 19, the Project Censored radio show interviewed Susan McAnelly, the manager of Browseabout Books in Rehoboth Beach, Delaware, and bookseller Madison Bacon about the store’s role in fighting the censorship of emily m. danforth’s The Miseducation of Cameron Post (HarperCollins) this past summer by the Cape Henlopen School District.

“ABFFE arranged for Susan and Maddie to participate in the program, and they did a wonderful job,” said Chris Finan, president of American Booksellers Foundation for Free Expression (ABFFE). Browseabout distributed 250 donated copies of the book, which was removed from the district’s summer reading list for high school students after complaints about profanity. “We took the stance that as an independent bookstore our job is to put books in people’s hands,” McAnelly told radio listeners. “We’re very passionate, especially about putting books in kids’ hands, in teenagers’ hands.” (The radio program is available online; the 12-minute Browseabout segment begins at 34:56.)

The fREADom poster at Books Inc. in Palo Alto.

To exemplify the value of challenged books, Bookmans, which has six locations in Tucson, Phoenix, Mesa, and Flagstaff, Arizona, is hosting a few different parties, each with themes originating from a book that has been banned. On September 27, the Flagstaff location will have a James and the Giant Peach party. Participants will be planting their own peach trees and watching the film while snacking on peaches. On the same day, Bookmans on Ina Road in Phoenix will throw a Hogwarts House Party to celebrate the much-challenged Harry Potter series. There will be a wizard photo booth and activities, including wand making and a venture into Snape’s Snake Den with local reptile expert Deb’s Dragons. Robert Holcombe, the store’s assistant manager, said there will be a Harry Potter movie showing on a big screen outside, and that Bookmans has been, and will always be, anti-censorship. “We have up signage and displays that people react to with incredulity,” he said. “They’re pretty surprised about what they find has been banned and they’re confused at why those books have been censored.”

Shock and surprise from customers regarding banned titles is a common response at many bookstores. The Doylestown Bookshop in Doylestown, Pennsylvania, has organized a literary flash mob that will take place on Friday, September 26, from 5:00 p.m. to 8:00 p.m. The group will enter a participating store or appear on the sidewalk outside and everyone will suddenly start reading. Those involved will carry sidewalk signs to explain that they are reading for Banned Books Week.

“We thought it would be really fun to try to get a buzz going around town,” said Jennifer Brenninger, Doylestown’s manager and buyer. “We feel like rebel booksellers; we love Banned Books Week. We set up a table in the store and people come up to us all the time, surprised at what’s been banned. They say, I read that book, I love that book, why would anyone ban it?”

Staff at Books Inc., which has 11 locations in California, experienced similar reactions of surprise from patrons this week. The indie stores are featuring banned book displays and are offering book clubs and story times all week to promote books that have been banned. Maggie Tokuda-Hall, the former director of Books Inc.’s children’s department, contributed an informative and fun YouTube video in celebration of the week.

Nick Petrulakis, manager of Books Inc.’s Alameda location, said there was a strong response to this year’s Banned Books Week display. “I’ve been blown away by the reception the display has received,” he told BTW. “We always do a display but this time, maybe because the books have ‘BANNED’ on them for the first time, people literally stop in their tracks. ‘Is this a joke?’ they’ve said. ‘Not in my country, right?’ I’ve had at least 12 substantive discussions with different customers about the display in the day since it’s been up.”

This week’s celebrations have an impact on booksellers as well as their customers. Books Inc. marketing and events coordinator Elena Eustaquio talked about the importance of Banned Books Week and the right to have access to information freely. “Banned Books Week means so much to us as booksellers,” she said. “The freedom to stock what we and our community seek; to recommend what we love; and to connect readers with authors they may not have known about prior to walking into one of our stores is a huge honor. When a certain book gets banned anywhere, our bookselling spirit just gets stronger, and so does our resolve to make sure anyone can get whatever book they’re looking for, even if it is one we wouldn’t necessarily want to read.”

Media Law Resource Center, Inc. (MLRC) worked with ABFFE to provide speakers for bookstores that were interested in hosting a program about censorship during Banned Books Week. One of those stores was Book Swap of Carrollwood in Tampa, Florida. Store owner Cynthia Floyd said the event generated a very active dialogue among attendees. “Some people didn’t even know you could ban a book,” Floyd told BTW. “They said, ‘I thought this was America.’”

The local attorney sent by MLRC began the event at Book Swap by explaining about First Amendment protections for different kinds of speech, verbal and in print, “and why it’s important we fight for these things,” said Floyd. “I felt like I learned a lot.”

“We are proud to have been a participant in Banned Books Week for the past several years and are incredibly impressed with how the event has grown,” said Dorianne Van Dyke, staff attorney for the MLRC Institute.  “We are so glad that Banned Books Week has been such a success, as it really brings together a diverse community and educates them about the importance of freedom of expression.”