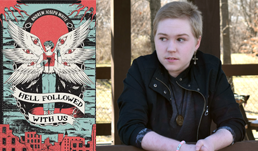 Andrew Joseph White is the author of Hell Followed with Us, a Winter/Spring 2022 Indies Introduce young adult selection.

Andrew Joseph White is a queer, trans author from Virginia, where he grew up falling in love with monsters and wishing he could be one too. He is a graduate student in George Mason University’s Creative Writing program and has a habit of cuddling random street cats. Andrew writes about trans kids with claws and fangs, and what happens when they bite back.

Cliff Helm of Left Bank Books, St. Louis, Missouri served on the panel that selected White’s debut for Indies Introduce, and said, “Hell Followed with Us is a utopian model for queer community masquerading as a dystopian YA novel. Andrew Joseph White has dared to create a story where queer kids of all stripes love, fight alongside, and care for each other despite their personal differences, the hellish world outside, and the myriad of things looking to kill them. It is as beautiful as it is hard to read. This is what horror can and should be.”

Here, White and Helm discuss Hell Followed with Us.

Cliff Helm: This is simultaneously one of the most gruesome and one of the most hopeful books I’ve ever read. What is it that drew you to horror for this book? And how do you walk that tightrope so well?

Andrew Joseph White: Horror is a lifelong love of mine. It’s freeing to confront the nastiest parts of humanity to see what they can teach us, you know? It’s also a cherished genre within the trans community. Many of us connect deeply with common horror themes like social transgression, vulnerability, and alienation. This made it perfect for Hell Followed with Us — I could push boundaries and tackle hard topics with metaphors I couldn’t get away with elsewhere, like the grotesque mutations of the Flood virus and the genocidal rampage of the Angelic Movement. It was a natural choice for a book that confronts queerphobia and religious extremism in America.

As for walking that tightrope, it just wasn’t realistic for a book about queer community to be completely horrific. Without light peeking through the cracks, not only would the darkness become too overwhelming to stomach, but it wouldn’t speak to my experience. Yes, the characters suffer, and they face pain that feels insurmountable, but they carve out a place to exist in a world that is trying to devour them, and I had to let that shine.

CH: One of the biggest things that stood out to me about the book is how big a part of it is centered on the affirming community these teens built. Is this aspirational or based on your own experience (aside from the hellish, apocalyptic landscape)?

AJW: I am blessed to be part of an amazing queer community these days, but I’ll be the first to admit this wasn’t always the case. I struggled for a long time — first, with having no community, and then with having a community that made me feel othered and unwelcome. It doesn’t help that I have a hard time with social interaction and making friends in the first place! So I’ll say that the community in the book is based on my own experience. It is wonderful, and while there are some areas where the characters could stand to improve, so many of them are amazing and willing to accept anyone who accepts them in turn. I hope everyone has the chance to find their people the way I’ve found mine and these characters have found theirs.

CH: Hell Followed with Us is fantastic and the mythology of it is as rich as it is gnarly. Is there anything you wanted to include but had to cut or couldn’t make work in this book?

AJW: When the book sold, there were a handful of flashbacks to the protagonist’s, Benji’s, past in the doomsday cult that caused the end of the world. Cutting them was for the best — they messed up the pacing and became obsolete during edits — but there was a lot of interesting information in there about the history of the Flood virus and the timeline of the apocalypse.

The thing is though, cutting them also did something I’ve realized is important: it leaves the exact development of the backstory to the reader. Like, what caused the cult to form? How did they convince so many people to join? Why couldn’t society stop them? There are some clues on the page, but nothing ever explains it outright. And I think that’s cool! Nothing I come up with will ever be as compelling as what a reader imagines on their own, especially if they’ve already made connections to what’s going on in real life. I want to encourage that as much as possible.

CH: Did you have a hard time writing any of the book? Did you have/need a self-care or a decompression routine to get you through writing it?

AJW: I think I surprise nobody when I say I didn’t. I have an iron stomach for this sort of thing, so whenever the story got even more upsetting than its baseline level of disgust and terror, I took it in stride. Truth is, working on this was how I decompressed from the rest of the world. And by the way, here’s a fun fact: since I have such a high tolerance, I wasn’t sure that Hell Followed with Us was difficult enough — I hadn’t crossed any of my own lines, and couldn’t judge where it would land for others, so I wrote what I wanted and hoped for the best. Thankfully, it’s been received well! I appreciate all of my readers who have told me how much they enjoyed the worst parts of this gross, messy book.

That being said, I’m currently working on something where I’ve finally found myself needing an emotional break. It’s a really cool story I’m incredibly proud of, but it’s hard to stomach, so I’m currently relying on a tried-and-true combination: my video games, my cat, and my fiancée. Those three can get me through anything.

CH: How much do you love the cover art for your book?

AJW: SO, SO MUCH. It is absolutely unreal. I printed a custom poster of it to hang by my desk and am waiting for the right opportunity to get part of it tattooed; the fact that I can pick up my book and see a trans character on the front, surrounded by rot and ruin, is a dream come true. Melia Parsloe (the designer) and Evangeline Gallagher (the illustrator) really made something special.

Find out more about the author at andrewjosephwhite.com.