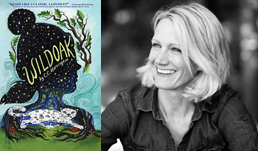 Harrington grew up in the English countryside. She spent her summer holidays in Cornwall where she loved to climb trees and run barefoot along pebbly beaches. She graduated from Oxford University with a degree in English Literature and has since worked for a newspaper, studied printmaking and taught literacy to children with learning differences. She now lives in Maryland with her family and a dog who loves to eat manuscripts.

Kilaparti said of the book, “Such a wonderful book of animals and the magic of nature. I was brought to tears too many times, remembering what it was like to struggle in a world that couldn’t listen. I loved this book and can’t wait for another generation of readers to fall in love with reading because of this magical story.”

King also shared, “In this world where one’s voice can't always be heard, Maggie and Rumpus tentatively form an unlikely friendship that will change both of their lives. This engaging and heartfelt novel is perfect for fans of Pax and other stories that explore the bonds between animals and people.”

Revati Kilaparti: Jane Goodall is clearly someone you admire, is there anyone else that inspired you to write this book?

C.C. Harrington: I do admire Jane Goodall enormously. I was reading one of her books, Reason for Hope as I was revising Wildoak, and listening to a number of interviews with her. (I especially love what she has to say about the connection between the human heart and the human intellect in her conversation with Krista Tippett for On Being.) But yes — there are many others who inspired the human elements of this story, in lots of different ways. Some of Maggie’s journey was inspired by a remarkable conservationist named Dr. Alan Rabinowitz and what he experienced as a young boy who stuttered when he spoke to humans but not to animals. I wish I could have met him — from what I understand he was an exceptional human being who was loved widely and is remembered dearly. Fortunately his work lives on in the organization he co-founded, Panthera. But in many ways, I’m equally inspired by the people in my life who are not as well-known as Jane Goodall or Alan Rabinowitz. A number of family members and old friends come to mind — people who face their own personal challenges and still find ways to move through the world with care and compassion, doing whatever they can in their own modest ways — whether that’s putting out a water bowl for hedgehogs in winter or listening patiently when that’s all it might take to change a person’s day.

Andrew King: While writing, do you write as you go in a chronological order, or do you jump around in your story if you have any specific scenes in your head and then connect them later?

CCH: It depends…! Wildoak is my first book to be published, but it’s also my third manuscript.  Sometimes I write as if I’m trying to find my way through the darkness, hands outstretched, not sure where I’m going. Sometimes there are scenes or moments that are clear to me, but I’m not sure what to do with them. I do a huge amount of re-writing and revising either way! For Wildoak, I had a strong sense of the three different threads early on, but it took a long time and a lot of drafting to figure out ways of weaving them into the final story.

RK Selling exotic animals in department stores was real…is that why you chose to set your story in this era?

CCH: Yes! Knowing that a big cat could possibly have been sold and then abandoned in this way was a key part of why I decided to set the story in 1963. Although once I started to research further, I learned more about The Big Freeze, which inspired much of the wintery/snowy landscape. I was also thinking a little about Rachel Carson and the publication of Silent Spring in the States. I wanted Maggie to be able to use her voice in ways that could potentially contribute to widespread shifts in the way human beings relate to our environment.

AK: As Revati mentioned above and you mention in an informational note in the book, the department store Harrod’s did indeed sell exotic animals as pets — out of so many choices, what made you choose the snow leopard for Wildoak?

CCH: That’s an interesting question. I think in part, some of the research I did into The Big Freeze of 1962/1963 led me to pick a snow leopard. But I was also living in Colorado at the time, in a cabin on the side of a mountain where it started snowing in October! I was surrounded by snow drifts, rocks and sweeping views of the Rockies so perhaps that influenced my thinking. That said, I have loved cats ever since I was little and I find snow leopards to be especially beautiful.

RK: “Be gentle with yourself. It is hard to be human,” was one of the quotes that really struck me; did you learn this from the trees yourself or from anyone special?

CCH: I have always felt comforted and reassured by the presence of old trees and love to spend time walking in woodlands or forests whenever I can. It might sound strange, but I really do feel a kind of connection, or perhaps access, to a different way of being when I’m immersed in the natural world. This particular line was inspired by a conversation with a dear friend who feels this too. We were talking about the wisdom and power of trees and a moment that had been hard for her. For me, there is truth to these words, and I carry them with me always.

Find out more about the author at christinaharrington.com.