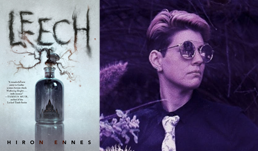 Hiron Ennes is the author of Leech, a Summer/Fall 2022 Indies Introduce adult selection, and October 2022 Indie Next List pick.

Ennes is a writer, musician, and student of medicine based in the Pacific Northwest. Their areas of interest include infectious disease, pathology, and anticapitalist healthcare reform. When they're not hunched over a microscope or word document they can be found playing in the snow or playing the harp (though usually not at the same time). They're queer in every sense of the word, and they really want to pet your dog.

Ellen McLaren of Queen Anne Book Company in Seattle, Washington served on the bookseller panel that selected Ennes’ debut for Indies Introduce. “I adored this,” McLaren said, “Leech is atmospheric and rife with troubled, sharply-realized characters. In particular, the narrator is one of the most fascinating voices I’ve ever come across. As deeply compelling as discomfiting — this debut is a must-read.”

Ellen McLaren: I never expected to enjoy reading about parasites, much less sympathize with one. What drew you to writing about them, and not just as a subject but as a protagonist?

Hiron Ennes: I’ve always been enamored with parasites. Not just because they’re spooky (though that helps), but because I find them a fascinating example of the ancient evolutionary webs that underlie all life on earth. Parasites are constant innovators in biological arms races; they adapt to their hosts as their hosts adapt to them, and their roles can vary with time and context. A host to one species may be a parasite to another, and a relationship that starts off as adversarial may become benign (or vice versa). I was intrigued by the possibility of a nonhuman species that is aware of these relationships and engineers them to the benefit of both itself and its host. I wanted to write about a parasite aspiring to mutualism, and the flaws and limitations in its approach. I wanted to characterize a creature that understands its dependencies the same way we are fumbling toward an understanding of our dependence on the microorganisms that live on and inside us.

EM: Relatedly, how did you approach the character (characters?) of the Institute? What were the challenges in portraying a singular/collective mind in distinct bodies?

HE: It’s difficult to characterize a hivemind, but I think especially so when its thoughts are expressed through conduits as unique and complex as human brains. Neural chemistry changes according to hormone production, epigenetics, emotional states, and external experiences — a myriad of interconnected environmental factors which cannot possibly all be accounted for. The human body is, essentially, anathema to uniformity. Therefore the Institute, just like those of us with only one brain, will have lengthy internal dialogues, contradict itself, change its mind, and make egregious mistakes. I approached the Institute as an externalization of my own thought processes. Each neural pathway is a tiny slice of my biology, miniature bodies that differ in time and structure, influenced by the conditions in which they come into being. Yet somehow, these clumps of fatty tissue work together to produce emotions, logic, actions and imagined possibilities, constructs so vast they extend beyond the host body itself. I find that both existentially horrifying and pretty darn neat.

EM: The premise of Leech is deeply chilling, and so is the setting! What inspired such a frozen landscape? And how did that fit into your wider world-building?

HE: For Leech, the setting came first. I grew up hiking in the Canadian Rockies, and I was always inspired by the immense, terrifying isolation of that landscape. Over the years I’ve tried to write many stories set in an alpine milieu, but I think Leech, as a post-post-postapocalyptic narrative, fits it best. Mountains are great reminders of our miniscule place in Earth’s explosive geological and biological history. Take Highwood Pass in Alberta, where at 7,200 feet above sea level one can find corals and fossilized shells millions of years old. Those frozen peaks were once the floor of a lively ocean, whose inhabitants we can only see through the imprints they left behind. These quiet reminders of Earth’s apocalyptic turbulence make me wonder what imprints human history will leave in its wake, and what unlikely mountains will house them.

EM: While Leech struck me as decidedly genre-bending (a gothic, speculative, post-apocalyptic fever dream), it’s definitely a strong example of horror. Was that always a genre that appealed to you? Why?

HE: I’m not married to horror as a genre, but the gruesome has always fascinated me. I was born cursed with a particularly morbid curiosity; my mother likes to tell a story of driving past roadkill and having five-year-old Hiron demand to go back and examine it because “I had never seen the inside of a cat before.” I also grew up in a small, rural town, and there wasn’t much else to do but go to Blockbuster with my buddies from Christian school and hone my taste in the hellish and satanic. I sort of grew into horror as a function of curiosity and boredom, and then discovered that it is a truly diverse genre — you’ve got your schlock, your slashers, your science fiction, your comedies, psychological dramas, supernatural fantasies, historical pieces, mockumentaries and meta-commentaries. As a writer I love that kind of versatility.

EM: Leech tackles a lot of challenging subjects — in particular, what it means to lose and reclaim personal autonomy, both physical and mental. Was this theme one that you set out to explore, or was it the natural consequence of writing about parasites?

HE: I didn’t initially set out to delve too deeply into some of Leech’s more difficult subjects. I knew I wanted to explore the morality of biological interdependence, and autonomy would necessarily be one aspect of that. It seems obvious in retrospect, especially when one is writing about creatures (and people) that devour and parasitize and take advantage of one another — but autonomy emerged quickly as the theme that most demanded to be accentuated. In the end I did what the story told me to, because out of all my mental parasites, Leech was the most persistent.