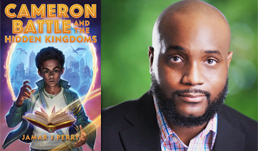 Jamar J. Perry is the author of Cameron Battle and the Hidden Kingdoms, a Winter/Spring 2022 Indies Introduce middle-grade selection.

Jamar J. Perry attended Berea College in Berea, Kentucky, majoring in psychology and English literature and Education. After graduation, Jamar became a middle school teacher in the Washington, D.C. area, hoping to instruct the next generation of scholars, thinkers, and writers. He is currently finishing up his PhD, focusing his research on Black boys, the history of traditional and Black masculinity in America, and racial literacy.

Isabella Ogbolumani of Buffalo Street Books in Ithaca, New York served on the panel that selected Perry’s book for Indies Introduce. She said, “Cameron Battle and the Hidden Kingdoms is a truly special book. I can’t wait for young readers to explore Chidani and discover just how magical and extraordinary they are!”

Isabella Ogbolumani: What was the inspiration behind Cameron Battle and the Hidden Kingdoms?

Jamar J. Perry: This book was inspired by a lot of things, the biggest being my own life and the hope of seeing someone who was just like me as a child showcased in a fantasy novel being a hero. When I was younger, I was isolated a lot and I didn’t have many friends at all. I was also bullied at school — which led to more feelings of isolation and overcompensating for that which I did not have. I decided to write Cameron Battle and the Hidden Kingdoms to explore how a lonely child can become a leader of his own emotions, of a child who could one day become a hero, helping to save an entire empire. And not only would he become a hero, he would also become magical, able to open barriers, see his ancestors, and all other manner of magical things. I wanted to create a character who contained multitudes, a character who experiences joy, sadness, happiness, and frustration all at the same time, while dealing with some of the most impossible challenges. Through his journey, Cameron Battle becomes a well-rounded person who understands his place in the world, but also understands its nuances, all with the help of his two best friends.

IO: The book is rooted in Nigerian folklore — specifically that of the Igbo people. What made you choose to explore Igbo mythology?

JJP: Exploring my roots was very important to me when I first started writing. However, the majority of literature is written by and about white people, so I never thought I would be able to fully put myself in a novel in an all-encompassing way until the push for diversity in publishing became something I began to pay attention to. So, with Cameron Battle and the Hidden Kingdoms, it truly became an exercise in expressing myself and, also, my roots. It took exhaustive work to research the gods and goddesses, the language, magic systems, and lands of the Igbo people. This work definitely showed that so many Black Americans will never know where they came from because they were forcefully taken from their homes to labor in a foreign country. This novel really allowed me to find out who I was, to figure out where my ancestors came from, while making sure that the main character has this journey as well. Cameron learns that his ancestors have power and draws upon them to be the hero he turns out to be. This novel showed me that mythology also is not static; it changes as people and experiences change. So, it was important for me to not only understand who I am, but also make sure my main character learns as much as he can to manipulate his magic for his purposes.

IO: There are so many children who are going to get to grow up reading about characters who look like them having incredible adventures! What are you most excited for readers to experience within the world of Cameron Battle?

JJP: I am so excited to see children really grapple with Cameron Battle’s character and explore how his friends are an extension of himself. For so long, heroes always seemed static to me; meaning, that they are one way at the beginning of the novel and are the same at the end. With Cameron Battle, I strove to make him human, modeled after me in certain aspects. I do not believe that we spring up truly happy, joyous, accomplished, etc. I tend to think that we don’t really know true joy without first going through some struggle, some trial, some tribulation. With Cameron Battle, we get to see this Black boy not only becoming a hero, but he does so in a way that feels earned, that feels like we can connect to him and have empathy for him. Cameron struggles so much in the book, wondering about his mother and father, about the grandmother he left behind, and worrying about the safety of his friends and this kingdom that he is told that he must save. By the end of the book, we get to really know who he is, thereby, making our acceptance of him feel natural. Cameron is also a Black queer boy, something we rarely see in traditionally published literature, if ever. I am excited for children to go on this journey with him, while queer children finally get the hero they deserve.

IO: What are some of your favorite authors and books?

JJP: My absolute favorite book, the one that I always go back to, is Octavia Butler’s Kindred. It is about a young woman named Dana who is thrusted back to the past of the Antebellum South, where she has to save her white ancestor so that she can exist in the future. It is a fantasy commentary on how Black people’s past is brutal, present tenuous, but the future open. In the novel, Dana has to contend with slavery in order to ensure that she will be born over a hundred years later. It is a way for her to claim her roots, although the situation is dire. I had this book in mind when I started writing Cameron Battle, as I wanted to show that Black children are dealing with their own histories as well, trying to figure out where they are from, and learning how to commune with their ancestors.

Another favorite book of mine is Roll of Thunder, Hear My Cry by Mildred D. Taylor. It was one of the first novels I read as an elementary/middle school student. I especially loved how this author took the harrowed history of sharecropping and Jim Crow and distilled it through the middle school lens through a middle school main character. This novel managed to capture an entire generation, a time period, in a novel written decades after the events depicted. Taylor is a true master of history, making you feel like you are placed in that moment in time.

IO: What is next for Cameron — what can we expect in Book 2? And do you have any ideas for stories outside of the Cameron Battle universe?

JJP: I actually just finished the first draft of Cameron Battle Book 2 and I am now working with my Bloomsbury editor to make changes to it. In Book 2 — which doesn’t really have a title yet — we see Cameron, Aliyah, and Zion having to make decisions outside of what they initially planned. We also see Zion and Aliyah take more of a leading role in the sequel, coming into their own, no longer in the shadow of Cameron. While they still help him on his path, they become something altogether different, which I love so much. If you read Book 1 closely, you’ll see all of the little nuggets I left in there that connect seamlessly into Book 2. We also see more of the gods, as Cameron has unleashed something in the world that hasn’t been seen in centuries. Will they be helpful gods? Or will they play games? Are they dangerous? These are some things I explore in Book 2, along with Cameron, Aliyah, and Zion making their own decisions, without the help of the adults as in the first book.

And yes! I have a number of ideas I am sitting on and waiting to talk with my editor about. After the Cameron Battle duology has finished, I want to work on a magic school series for Black boys, possibly in an anthology or a trilogy of my own; I haven’t really made up my mind, yet. But I want to see Black queer boys learning magic like Cameron learns, but in different ways. I want to see them as wizards and mages and witches, brewing potions, casting charms, etc. I cannot wait to start compiling all of these ideas in the new year and get a proposal together for an anthology and a series, hopefully having them come out a year after the Cameron Battle series ends. So much to look forward to!

Find out more about the author at jamarjperry.com.