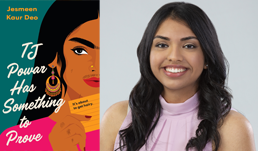 Jesmeen Kaur Deo is the author of TJ Powar Has Something to Prove, a Summer/Fall 2022 Indies Introduce young adult selection.

Deo grew up in northern British Columbia, where she spent most of her childhood daydreaming. She loves books that can make her laugh and tug at her heartstrings in the same paragraph. When not wrapped up in stories, she can be found biking, playing the harmonium, or struggling to open jars. TJ Powar Has Something to Prove is her debut novel.

Melissa Taylor of E. Shaver, Booksellers in Savannah, Georgia, and Kassie King of The Novel Neighbor in Webster Groves, Missouri, both served on the panel that selected TJ Powar Has Something to Prove for Indies Introduce. Taylor said of Deo’s debut: “This is such a highly relatable, feminist rom-com that has enough meat to make it more than just fluff. This book confronts female beauty standards and more than that, it does it in a completely realistic way...Plus, there’s the swoony romance with her academic rival that I saw coming a mile away, but loved every minute of!”

King also said of the book: “There was not a single page of TJ Powar Has Something to Prove that I didn’t love. This book is a deeply feminist deconstruction of beauty standards AND a swoon-worthy academic rivals-to-lovers romance. Who could ask for more? I can’t recommend this enough!”

Here, Deo, Taylor, and King discuss TJ Powar Has Something to Prove.

Kassie King: This story felt like something incredibly personal, but also has a universal message. Why do you believe TJ Powar Has Something to Prove is so important for teenage girls right now? Do you wish that you had a story like this growing up?

Jesmeen Kaur Deo: Absolutely. I wrote this story because it was the one I needed as a teen — a story that talked frankly about body hair, and gave a hairy brown girl the kind of love story I would’ve devoured at that age. I think it would’ve allowed me to accept myself a lot sooner than I did. That’s what I want for young girls who pick up this book now. I don’t want them to grow up believing there is something inherently monstrous, dirty, or unattractive about their bodies the way I, and every brown woman I know, did.

But it was also really important that this book touch on rigid standards of beauty in general. I think everyone, not just hairy girls, can benefit from opening their minds a little and cultivating their own unique sense of beauty and what we find attractive. We don’t have to all subscribe to this one. On top of being Eurocentric and gendered, it’s so boring! There’s a scene in the book that kind of alludes to this, in that it touches on genetic diversity and how important it is to have in a population. What happens when we all strive for the exact same beauty ideals — when we strive for sameness? Nothing good, that’s for sure.

Melissa Taylor: Why did you choose to frame the story against the backdrop of debate competitions?

KK: I second this question! I loved the rivals-to-lovers element as well as TJ’s growth through debate. As a former debater, it felt so authentic!

JKD: Thank you! I’ve always wanted to write a book about high school debate club; it was one of the highlights of my high school career. When I had the idea to write about body hair stigmas, I wondered if the two concepts could work together. And indeed, the more I thought about it, the more it started to make sense. TJ being a debater feels like a natural extension of this theme of constantly having to defend your existence and your right to take up space in the world just the way you are.

KK: Throughout the book, TJ goes from believing that she can operate within Eurocentric standards of beauty to believing she is worthy of respect regardless of if she fits within that beauty standard. Why is this an important distinction for TJ and how did you want this distinction to impact the story? TJ and her cousin Simran relate to their bodies and culture differently. Why were both of their perspectives important for you to include?

JKD: For TJ, she’s spent most of her life placing a lot of the weight of her own identity on her beauty. So of course even when she embarks on this journey, that is still on her mind. She wants to be seen as beautiful with her body hair because she equates her looks with her value as a person. It was important that she let go of that — and reject those racist and gendered standards along the way — to come to a healthier place. And personally, I’ve never found “everybody is beautiful” to be a particularly inspiring message. After all, it still puts pressure on us. It still frames being beautiful as the most important thing. I think it’s somewhat liberating to let go of the notion altogether, to be okay with being ugly.

However, there’s a lot of layers of complexity to beauty standards and why people may or may not choose to conform. Simran, for example, is Sikh. Many Sikhs keep their hair, symbolically or as an identifier, and for a lot of Sikh women it is really hard to reconcile that part of their spiritual identity with what society demands of them. Ultimately I wanted to show that there are a myriad of reasons why someone might choose to go against societal expectations, like Simran, or go with them, like Nate. Neither are wrong to do so.

MT: I really loved TJ and Charlie as characters, but some of my favorite characters in this book were secondary ones. Which supporting character was the most fun for you to write and why?

JKD: I think my answer to this question will change every time someone asks me! But today, it’s Chandani, TJ’s best friend. I’ve always wanted to write a mean-girl-friendship. I’ve seen so many fictional boy friendships where they constantly rag on each other but we know deep down they love each other — but I rarely see that with girls. TJ and Chandani’s dynamic, where they are both somewhat emotionally constipated, spit fire at each other, but at the end of the day have a deeply profound love between them, was so much fun to write. She and TJ also butt heads about the subject of body hair. This was meaningful to me, to represent how women are taught to shame each other — and we often shame each other more than any outsider would, in a misguided act of caring. It’s not our fault. It’s born of mutual trauma. In TJ and Chandani’s case, they go through that trauma together, growing up. And eventually they have to come to terms with it.

KK: Congratulations on one of the best debuts I’ve ever read! I could hardly believe this was your first novel. When did the idea for this story hit you and how long was your writing process?

MT: And what books or authors were inspirations to you in writing your debut?

JKD: That is extremely kind of you to say! Thank you! If you can believe it, I wrote the first draft of this story back in 2019. The advance reader copy version is derived from a draft in mid-2021, when all the big edits were done, so you can say it took me a good year and a half to get it into that shape, working on and off.

I always have to give credit to To All the Boys I’ve Loved Before by Jenny Han, because it was the series that made me fall in love with the potential of YA contemporary. While writing TJ Powar, I read other books that address body image such as I’ll Be the One by Lyla Lee, There’s Something About Sweetie by Sandhya Menon, and Dumplin’ by Julie Murphy. I’ll also add that the dynamic between TJ and her love interest is somewhat inspired by that of Brienne and Jaime in Game of Thrones/A Song of Ice and Fire. Game of Thrones’ final season had just aired while I was brainstorming for TJ Powar, and it was cool to see an explicitly ugly woman get a serious romance, to have the narrative invest in that relationship rather than play her love life off as a joke. It’s again coming back to the idea that you don’t have to be beautiful per se to be desirable. In my book, it’s at her “ugliest” that TJ becomes her most attractive to her love interest. That was important too, because looks are only one dimension of what can make a person attractive. After all, looks are just one part of being human.

Find out more about the author at jdeowrites.com.