Laura Gao is the author of Messy Roots: A Graphic Memoir of a Wuhanese American, a Winter/Spring 2022 Indies Introduce young adult selection. 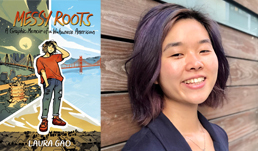 Laura Gao is a 25-year-old queer artist, author, and bread lover. Originally from Wuhan, China, Gao immigrated to a small town in Texas when she was four. Gao's art career began by doodling on Pokémon cards and has since blossomed to be featured on NPR, the MOCA in NYC, and most notably, her parents’ fridge. Gao graduated from the University of Pennsylvania in 2018. She worked at Twitter as a Product Manager until 2020, when her webcomic, "The Wuhan I Know", went viral on Twitter and ignited her art career. She swears on Jack Dorsey's beard she did not pull any strings to go viral, and wishes people would stop asking her for tips. Besides drawing and complaining about early-onset back pain, Gao enjoys living nomadically and biking around the world, designing apps for non-profits, bakery-hunting, and watching SNL.

“Laura’s roots are very tangled, “ said Shirley Mullin of Kids Ink Children’s Bookstore in Indianapolis, Indiana. “She was left in Wuhan, China, right after she was born when her parents immigrated to the United States. Four years later when her parents returned, she, of course, did not know them. And moving with them to Texas, Laura not only had to become acquainted with her parents but also a new school and learning English. Reading this very touching graphic memoir, one hopes for a sequel to learn more about where Laura has planted her roots.”

Here, Mullin and Gao talk about crafting a graphic memoir.

Shirley Mullin: Why did you decide to write a memoir and why in graphic form?

Laura Gao: Messy Roots started out as a viral comic I created called The Wuhan I Know, which highlighted the beautiful things I loved about my hometown and shared my own experience with racism growing up and at the start of the pandemic. I received a note from an Asian-American mother who said her young daughters were inspired by the comic and asked if I was planning on writing more.

And that’s how Messy Roots began.

I knew from the beginning I wanted Messy Roots to magically transport the reader into my shoes as they undergo the same identity-seeking journey I did. From squirming in embarrassment as the entire school mocks the Asian mathlete, to staring in awe at the beautiful Wuhan skyline reflected on the Yangtze river the first time I went back to my hometown, to my internal battle with identity portrayed by the white rabbit from Chinese candies and folklore. Comics enable me to marry my storytelling with my art to give readers the full, immersive experience.

SM: Is there anything in Messy Roots that you now wish you had not included?

LG: Since most of my editing was cutting out a bunch of scenes, nothing specific comes to mind. One thing I’m still grappling with as a bilingual author-illustrator is how to best represent non-English languages in a way that pays them equal respect with English. It gets even messier when dealing with different dialects, such as my representation of Wuhanese Mandarin in the book. Wuhanese doesn’t follow the same tones and phonetic pinyin spelling as standard Mandarin, so deciding when to use what while minimizing reader confusion was a challenge.

I wish I wrote about these nuances and tradeoffs made in an author’s note at the end. But at the same time, I wish I didn’t always have to explain myself.

SM: Anything in your life you now wish you had included?

LG: I would expand more on my friendship with Sree, my art friend in high school, because she was one of my strongest relationships with another Asian kid in Coppell, and taught me so much about how to stick up for myself. I also would include more scenes of solidarity against anti-Asian racism during the pandemic, such as the protests that spread around the world, or Bill and I delivering free groceries to elderly Asians in San Francisco.

SM: What was the reaction of your parents and Jerry to your book?

LG: Jerry and I share the same humor and brain cell, so he found it hilarious that the world will know about our sibling shenanigans. He wants everyone to know “his version will be 10x better and instead of the chunky cinnamon roll I drew him as as a baby, he’d be a hotter version of baby Batman.”

My parents were less enthused, partly because they’re hoping this is “just a phase” and I’ll return to a corporate job soon, and partly because they haven’t come around to my queerness yet. Regardless, my family back in China are proud, especially my grandparents who chirped excitedly over our video chat that they never thought their long lineage of farmers would ever have a published author!

SM: Have you visited Wuhan since the pandemic?  Are your family members in China aware of how some of the American public blame China for the virus?  If so, what do you say to them and what do you say to Americans who are misinformed and/or rude?

LG: Unfortunately not, since China has been incredibly strict about entry. My family members are aware, sometimes even more vigilantly than I am, since their news channels report a lot on the anti-Asian waves happening globally. They often send me worried WeChat messages every time they learn of another attack against an Asian in the U.S. I hope Americans who are misinformed or rude remember that not one single person “caused” this, and that hating someone is a reflection of your own character.

Find out more about the author at lauragao.com.