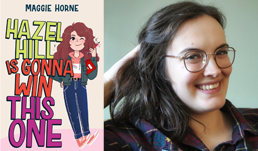 Maggie Horne is the author of Hazel Hill Is Gonna Win This One, a Summer/Fall 2022 Indies Introduce middle grade selection, and November/December 2022 Kids’ Next List pick.

Horne is a writer and editor who grew up near Toronto, Canada. After living in the UK for three years, she imported her best-ever souvenir in the form of her wife, and now lives outside of Ottawa with her family. The author of the middle grade novel Noah Frye Gets Crushed from Clarion Books, as well as the YA novel Stay Here with Me from Feiwel and Friends, Maggie is always trying to write the queer stories she wishes she could have read growing up.

Melissa Taylor of E. Shaver, Bookseller in Savannah, Georgia and Nicole Brinkley of Oblong Books in Rhinebeck, New York served on the panel that selected Horne’s debut for Indies Introduce.

Brinkley said of the book, “When quiet, snarky, academic Hazel is told all the secrets of the school’s golden boy, she figures out that he’s been harassing some of the girls at school — and she can’t let that stand. This middle grade novel about friendship, revenge, and standing up for the right thing is both funny and empowering. Great for fans of Kate Messner!”

Taylor also shared, “Hazel, you glorious little badass! I loved everything about this story! Hazel is funny, smart, insecure, and ultimately, brave. My nerdy, introverted, middle school self needed a book like this. A book that shows that it’s not ok for girls to be treated like their bodies are a distraction and something they should have to apologize for. A book that says that it’s not just ‘boys being boys,’ and that ‘he just likes you’ is not an excuse for reprehensible behavior. And a book that celebrates young women finding their voice and speaking up for themselves and other young women. I can’t wait to read more from Maggie Horne.”

Here, Horne, Brinkley, and Taylor discuss Hazel Hill Is Gonna Win This One.

Melissa Taylor: The scene in your book that continues to stick with me after reading it is the one where the principal of the school tells the girls in the story to act more like “little girls,” essentially shifting the blame for the harassment they’ve encountered onto them. What was the inspiration for this scene?

Maggie Horne: One of the things I remember most about being 12 is being so consistently frustrated with the way I was perceived. I was a “little girl” if an adult didn’t want to take me seriously, but if I said something “too smart” or wore something that “showed off” a body I absolutely wasn’t ready to have at that point, then I was being “too grown up.” I wanted to try and articulate that experience within the context of what’s happening to the girls in the book — like Hazel says, if they’re such little girls, shouldn’t people want to protect them?

Nicole Brinkley: Much like Mia in Kate Messner’s Chirp — who I firmly believe would be great friends with Hazel in my imaginary universe where they meet — Hazel is rallied by her newfound friends to pursue justice, even when it’s hard. It’s no question that friendships are important, but in a world of never-ending change and seemingly endless problems, what role do you think friendships play (especially for young people) in finding the strength to ”make good trouble” — and what role do you think fictional friendships play in encouraging the same?

MH: I think a lot of adults would be shocked to find out how much quiet rage there is boiling up in young people today — so much in the world is unfair and unjust and, especially when you’re middle grade age, it impacts you deeply but it doesn’t usually feel like there’s anything you can do about it. I think having a strong friendship or friendship group can give you the extra backbone you need sometimes to speak up about something. The worst-case scenario happens to Ella, Riley, and Hazel — they try to speak to someone and they aren’t believed — but they have each other to complain to and encourage each other to keep going.

I think that when you read something — when you see or hear something in an Actual Real Book — it can legitimize it for young people so much more than we even realize. If readers come away from Hazel Hill feeling like they’re friends with the three girls in the story, then I hope that that fictional friendship can help them stand up in their own lives.

MT: Which of the characters was it the most fun to write?

MH: I loved being in Hazel’s head — she has such a stream of consciousness voice that was so much fun to write. It’s not very often that you can write a book where the main character goes off on a brief, totally unrelated tangent about her dead pet hamster (RIP Mozzarella) and it still completely serves the plot!

NB: One of my favorite things about Hazel is her quiet queerness: she likes girls, but it’s not really relevant to the plot or story save for a minor moment of intrigue at the beginning, and it’s not one of her main characteristics. I love quietly queer characters, as it fits much more with my experience of queerness, but we don’t often get to see them in fiction. What was it like to weave that into the story without making it the star, and what do you think it will mean to the kids who see themselves in Hazel?

MH: I love that you phrased it as “quiet queerness,” because I think the “volume” of Hazel’s queerness — and my own, at that age — actually fluctuates massively. On the outside, Hazel’s queerness is practically silent; by the end of the book, only a few people know, and Hazel still isn’t quite ready to be totally out. But to Hazel, in her head, her queerness isn’t quiet at all! It’s very, very loud, and it informs a lot of how she interacts with the world and how she sees herself fitting into it. It was really amazing to get to write that experience — pretty much my exact experience, though I didn’t come out “fully” until my 20s — in a book that I know would have been a game-changer for me at 12. I only hope that if kids see themselves in Hazel, they understand that they can be queer at any volume.

MT: What do you most hope young people will take away from reading your book?

MH: I know that the unfortunate reality is that young people have and will share experiences with Hazel and her friends, so I very much hope that they’ll understand how common the problem is and that they can do any number of things Hazel and her friends try to stop it. But I also hope that I’ve managed to share a wide enough range of experiences so that if, for example, they relate more to Maya, one of Tyler’s victims who can’t speak out because she’ll be punished by her parents, they’ll understand that there are options and help for them, too. Not everything has to be a prize-winning speech! (Unless you’re Hazel, in which case it definitely does.)

Find out more about the author at maggiehorne.com.