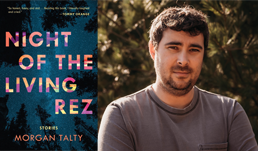 Morgan Talty is the author of Night of the Living Rez, a Summer/Fall 2022 Indies Introduce adult selection, and July 2022 Indie Next List pick.

Talty is a citizen of the Penobscot Indian Nation where he grew up. He received his BA in Native American Studies from Dartmouth College and his MFA in fiction from Stonecoast’s low-residency program. His work has appeared in Granta, The Georgia Review, Shenandoah, TriQuarterly, Narrative Magazine, LitHub, and elsewhere. A winner of the 2021 Narrative Prize, Talty’s work has been supported by the Elizabeth George Foundation and National Endowment for the Arts (2022). Talty teaches courses in both English and Native American Studies, and he is on the faculty at the Stonecoast MFA in creative writing. Talty is also a Prose Editor at The Massachusetts Review. He lives in Levant, Maine.

Destinee Hodge of East City Bookshop in Washington, DC served on the panel that selected Talty’s debut for Indies Introduce. She said of the book, “Sometimes, from the moment you read a book, you know it will stick with you for a long time — this is one of those books for me. In a collection of connected stories, we follow the experiences of a young man of the Penobscot nation. Talty’s writing about reservation life has a way of making experiences feel both universally human and also uniquely Native American. At times hilarious, and at other times heartrending, this book will immerse you in the way the best literature does.”

Here, Talty and Hodge discuss Night of the Living Rez.

Destinee Hodge: This was one of the most achingly honest books I’ve read about reservation life. I really appreciated your ability to mix ubiquitous and quotidian occurrences with experiences that are unique to life on a reservation. How did you strike that balance in this book?

Morgan Talty: Thank you so much for the kind words, and I’m so happy the collection struck you in this way. For me, I think I really defaulted to what I knew — what I experienced — and tried to be careful about the ways I employed that knowledge, since it can be easy to “perform” for a readership when you’re a Native writer. I really wanted to cut against what readers might expect, and so I really focused on the characters — making them Native, certainly, but making them human.

DH: Although the stories could be read individually, as I progressed through the book, each one revealed another layer of who David is in a way that left me contemplative afterward.  Almost as if I’d take a bite, ruminate, then come back for more. Were you always certain this would be a collection of stories instead of a novel? How did you arrive at that choice?

MT: I was pretty adamant that it would be a collection of stories. I did, at one point, contemplate turning it into a novel, but I found that trying to do so make the book feel mechanical in a way that I did not like. In other words, I found the stories and their order resisting that change. And so I made the decision then that it would be a collection, that I would give these stories what they wanted. I was careful, though, because I saw an overarching “plot” or trajectory, but instead of imposing that on the story, I sought to let it be a suggestion, something more, and in doing so I really think it made the book something unique. I always say: a writer’s job is to do the work, sure, but it’s also their job to listen to the stories, and so I’m forever grateful for whatever luck was on my side!

MT: Maybe half and half — I never set out to take my full experiences and write them into the fiction, but rather draw on them when it felt right, by which I mean I could use those experiences in a way that offered some type of truth. For example, the story of a man getting his hair stuck in the ice was a story I had heard, and I thought that was a striking image and so I built a story around it. In other instances, such as Safe Harbor, I did witness my mother have a seizure, and so that moment — while in a work of fiction — did actually happen to me. There are other moments, small and large, that come from my life, but I found it so important not to rely solely on those experiences. To do so would, I think, miss the larger truth fiction can reveal to us.

DH: While there is an ever-growing number of Native writers getting traditionally published, the industry still has a really, really long way to go. Because of your role in more rarified air, did you ever feel the need to make sure certain aspects of Penobscot culture or experience were shown? Why/why not?

MT: Definitely. I didn’t want to put my culture on display — I think that’s an easy way to get readers in some ways — and so I tried my hardest to focus in on the people, the family, and have the culture be there, certainly, but the defining characteristics come from their circumstances and their lives. I wanted to use traditional stories and language when they were required in the way that we need stories and language as opposed to when they felt like they might just perform.

DH: A year from now, if someone asked me what I remembered most about the stories, it would probably be how relationships — with friends and family but specifically parents — shaped so much of who David becomes. If you could play at omnipotence, what is one thing you would have readers remember about your book? Why?

MT: That we can always learn to love better — that we can and should try to find the hope and forgiveness. So much pain has been caused by the inability to do these things, which can be hard at times, but we have to try.

Find out more about the author at morgantalty.com.