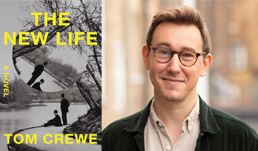 Tom Crewe is the author of The New Life, a Winter/Spring 2023 Indies Introduce adult selection and a January 2023 Indie Next List pick.

Crewe was born in Middlesbrough in 1989. He has a PhD in nineteenth century British history from the University of Cambridge. Since 2015, he has been an editor at the London Review of Books, to which he contributes essays on politics, art, history, and fiction.

Camden Avery of The Booksmith in San Francisco, California, served on the panel that selected Crewe’s debut novel for Indies Introduce. Avery shared, “The New Life is an ambitious, beautifully executed glimpse into the lives of four people living in late 19th-century London as they try to break the bonds society’s placed around sex, love, marriage, and what it means to live fully. Beautifully varnished and tonally pitch-perfect, Tom Crewe’s debut is a dazzling character study in what it means to want a bigger life, and to pursue a life outside the perimeter of what the world has set before you.”

Camden Avery: It feels in some ways as though we’re living through a historical moment akin to the one your characters experience: trying to dismantle inherited social systems about sex and how we’re allowed to live. Did researching and writing the characters throw any light on how you see what’s happening now, or on how you live?

Tom Crewe: For most of the time I was writing, I worried that my subject was too niche — would anybody want to read about these Victorians and their theories of sexuality? Only later did I realize that at some point the book had started a whispering dialogue with the present, which other readers are now helping me hear better. As for whether my characters throw any light on the present: well, they are reminders that in every time, people are dreaming of a better world; and in every time, there will be “some achievement, and some remorse,” as my epigraph says. That gives me hope, overall: setbacks may be temporary, we are all changed by the trying. It is good to be brave.

CA: I read that the book’s main characters are drawn closely from historical figures. How did you encounter those figures initially, and what was it about them that told you their story needed to be written?

TC: John and Henry are (very) loosely based on John Addington Symonds and Havelock Ellis, who wrote the first book in English about homosexuality (eventually published in 1897, though written at the beginning of the decade). I first encountered their story ten years ago, through reading about Oscar Wilde — what I eventually realized was that the 1890s, the decade associated with Wilde’s greatest success, his love affair with Lord Alfred Douglas and his downfall, was initially a period of optimism about what we would now call gay rights. We don’t remember this because Wilde’s tragedy cut across it and changed the course of history. My early ambition was to dramatize this moment, to find a new perspective on gay experience in Victorian Britain which, far from making Wilde its focus, let us see instead how his arrest came from nowhere, like a meteor, blasting the very different future that others were envisioning. However, I only saw how I could do this when I thought of Symonds and Ellis as belonging to two marriages, which were in a way mirror images of each other: one gay man and his straight wife, one straight man and his gay wife. It was once I saw this pattern at the heart of the historical story, that I knew I had the idea for a novel.

CA: If John and Henry were alive now, what do you think would please or disappoint them? What would they be searching for?

TC: They would both be pleased with the toleration of homosexuality — though probably surprised by the idea of gay marriage. The more generous understanding of human sexuality generally would be very welcome, as would the (not unrelated) advance of women’s rights, and many elements of the UK welfare state. Henry would be delighted with the NHS (his historical inspiration, Havelock Ellis, was arguing for a national health service in the 1890s).

They would both be shocked, rightly, that poverty remains so significant a feature of modern life, and that free-market ideology has enjoyed such a sway, actually destroying many of the civic and social achievements of what we consider, condescendingly, to have been a “laissez-faire” 19th-century.

CA: The notion of living “in the future we hope to make” is so compelling, but the book is also very clear about the consequences levied against people trying to do just that. I’m so interested in the idea of being forced to compromise between social idealism and preserving a private love, which plays out slightly differently these days but still seems so relevant. In the many ways your characters have of addressing that tension, did you find yourself inclined towards one over another?

TC: If these dilemmas have dramatic power in the novel, it is probably because I’m not sure of the right answers either, and can feel both sides with equal force. I said earlier that it is good to be brave...but bravery has its costs. Probably like most people, I am brave only sometimes and in some ways. Maybe I’m slightly more inclined to the characters in the novel who have a clearer sense of when a risk is worth taking. But then already, there is a voice in my head that says “How do you know that the risk won’t pay off? How can you know if you never try?” So I am back to square one.

CA: What’s something vital about one of your characters that didn’t make it to the page in the final draft?

TC: I hope nothing vital dropped out — that would be careless of me. But every novel has its ghosts. At a quite late stage, after the novel had sold to publishers but before editors had become involved, I decided to cut around 15,000 words. So there are things that seemed necessary almost until the last moment, now existing only in my mind’s eye. I can see John and Frank standing on the steps of the Fitzwilliam Museum in Cambridge, smiling at each other over a cigarette. And their secret hug in the chapel of Trinity College, that is a secret still.

Find out more about the author on Twitter at twitter.com/TomCrewe1.