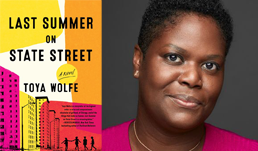 Toya Wolfe is the author of Last Summer on State Street, a Summer/Fall 2022 Indies Introduce adult selection, and June 2022 Indie Next List pick.

Wolfe grew up in the Robert Taylor Homes in Chicago’s South Side. She earned an MFA in Creative Writing at Columbia College Chicago. Her writing has appeared in African Voices, Chicago Journal, Chicago Reader, Hair Trigger 27, and WarpLand. She is the recipient of the Zora Neale Hurston-Bessie Head Fiction Award, the Union League Civic & Arts Foundation Short Story Competition, and the Betty Shifflett/John Schultz Short Story Award. She currently resides in Chicago.

Anne Frey of Watermark Books & Café in Wichita, Kansas served on the panel that selected Wolfe’s debut for Indies Introduce. Frey said of the book, “Last Summer on State Street will knock your socks off. A coming-of-age story in which the setting is as much of a character as Fe Fe, our twelve-year-old protagonist. The reader will be with Fe Fe the summer of 1999 as she tries to manage life in building 4950 of Chicago’s Robert Taylor Homes. This debut novel will stay with you long after you finish the last page. I say: Well done, Toya Wolfe. Bravo.”

Anne Frey: What made you want to tell this particular story?

Toya Wolfe: This story of girlhood, of a community long gone, started out as just an exploration of what the kids around me, the young people at the Charles A. Hayes Family Investment Center, would endure as they were severed from their friends, school, and neighborhood of high-rise projects of the Robert Taylor Homes. It broke my heart to think about the disruptions that these twelve-year-olds would face.

TW: For so long, all of the characters that materialized in my head were knocking around the building where I grew up in the Robert Taylor Homes. It was the only story world I could see for the longest time.

AF: Out of the four friends, who was easiest to write?

TW: Stacia Buchanan was the easiest to write; she actually took over the book for a while, and was the most explosive, dynamic character. Growing up, I didn’t know any girls like her, girls who could straddle both the streets and a tame, innocent friendship. At twelve, she knew exactly what she wanted — even if she didn’t know how to get it. She was easy to write because I could just let my imagination run wild.

AF: Where else can we find your work?

TW: Some of my past writing can be found in African Voices, Chicago Journal, Chicago Reader, Hair Trigger 27, and WarpLand. I’ve also recently finished a few essays, so keep an eye out for those, but in terms of novels, this is my one and only.

AF: Please tell me you are working on another book!?

Find out more about the author on twitter at @ToyaWolves.