A Q&A With Ali Hazelwood, Author of September Indie Next List Top Pick “Love on the Brain” 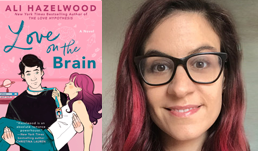 Independent booksellers across the country have chosen Ali Hazelwoods’s Love on the Brain (Berkley) as their top pick for the September 2022 Indie Next List.

Love on the Brain follows Dr. Bee Königswasser, a Marie Curie enthusiast, as she lands her dream neuroengineering project working at NASA for the summer; she finds herself co-leading the project with her former graduate school archenemy, the handsome Dr. Levi Ward.

“Ali Hazelwood has done it again! This is NOT a novel that you can read a few pages here, a few pages there — it demands one sitting,” said Stefanie Lynn of The Kennett Bookhouse in Kennett Square, Pennsylvania. “With expert pacing, witty humor, and loveable characters, Love on the Brain is this fall’s hot romantic comedy!”

Here, Bookselling This Week talked about writing the book with Hazelwood.

Bookselling This Week: What inspired you to pursue a PhD in neuroscience and then incorporate your knowledge into writing contemporary romance?

Ali Hazelwood: Growing up, I was just very interested in individual differences between people — why some people find some things really, really easy and others find them hard. I always felt like I was a very anxious person, and I didn’t quite understand why I was worried about everything all the time and some of my friends weren’t. I remember being really young and already being interested about this whole wiring stuff — why are some people one way and other people another way?

I remember taking my first neurobiology class and being obsessed with the idea that the structure of our brain, of our nervous system, can influence the way we are able to process things the way we are. I decided to go into neuroscience and ended up combining quantitative psychology and neuroscience because I still do a lot of stats stuff.

I got into writing fiction very, very late. At least, I feel like most of the authors that I talked to had been writing for a while, but I started in my late 20s. Originally I was just really writing fanfiction set in academic settings, which I know sounds a little bit weird, but I think it's because I was in the last year of my PhD. I was very stressed out in grad school, and it was just a fun idea of a bunch of characters that I really loved — how would they react if they were in my situation? If they were in grad school, what would be their way of acting and dealing with the type of hardships that I'm dealing with? That’s how I started incorporating elements of science and academia into what I was writing and the books that I’m writing right now are very much a continuation of that fanfiction.

BTW: As your next “STEMinist rom-com book,” can you share more about women in STEM and why it’s important in your writing?

AH: I started writing about women in STEM [because] it felt closest to my lived experience. It was something I was living every day and there were some parts of it that were kind of a struggle, and I wanted to put it on paper. There was a little bit of a catharsis; I can take some of the things that I really don't like about my life in the lab, or my life in academia, and I can kind of make fun of them and exercise them a little bit. They don’t sound as  scary when you're writing about them in a rom-com. Like losing your funding, or your mentor leaving because of something that happened to me, or feeling like your experiments are not doing well, or feeling like your career is stalling. All of these things are so terrifying in person, but when you explore them within books, you demystify them a little bit.

There have been so many people who have told me, I read your story about a woman in science and I am a woman in science myself, I really feel seen, or it resonates with me because I have lived a similar experience, or this rings true based on what I know. Hearing all these things is such a blessing. It's such an honor to know that something that I've written speaks to someone who's in a similar situation.

AH: When I was back in grad school, I was obsessed with this Twitter account that's called “Shit Academics Say.” It was definitely an inspiration for both Bee and Levi's Twitter accounts. It's a bunch of funny posts about how academics are losers. I loved those, but I definitely have to say most of my community was in-person. What's funny is that I when I started being active in the fandom in the last year of my PhD , I got really, really lucky — basically through fandom and through other people who were in love with Star Trek or Star Wars, I met other academics who were graduate students or professors and I ended up finding through fandom other women in academia that I could talk to a lot. So I definitely had a great support system.

During grad school. I was lucky again because two of my mentors were women and they were fantastic. I was actually the only woman in my PhD, but there were women in my lab and they were such a gift during my PhD. They were the people that I went to whenever something was going wrong, and we were able to commiserate together. So I definitely wanted to take up that feeling of support and having a system around you that is going to be there for you.

BTW: The lab has strong women on the team, including Bee, her research assistant Rocío, and project manager Kaylee. Did you write any of them based on you or your experiences?

AH: I don't think that I took the characters and base them off of people, but I definitely based the feeling of being one of very few women in the room on things that have happened andt felt very familiar. One of the first few days of grad school, in my cohort of eight people, I was the only woman in the room. There was that feeling of what I do is different from everyone else here. And [still] I am a white woman, so there is a lot of privilege there. Right? I come to these meetings still with a big chunk of privilege, and I know that being a woman of color in STEM is actually much harder, because these things of course add up. I took that feeling, of am I in the wrong place? Why is everyone else in the group different from me? It was something I wanted to convey, the idea of, am I not meant to be here?

BTW: Your book The Love Hypothesis included pop culture references and was originally Star Wars fanfiction. Was Love on the Brain inspired by any fandoms or pop culture?

AH:I started writing Love on the Brain while we were pitching The Love Hypothesis to editors. It actually took a very long time to sell The Love Hypothesis, but my agent really believed in it, even if we didn't actually have very good feedback about it. She was still really supportive and was like, you know what, maybe it's because it was a fanfiction, so let's just write something else. She was very encouraging to me and said let's write another book.

For a long time, while I was writing Love on the Brain, I really thought that it would end up being my first book.  Love on the Brain was a bunch of the things that I liked. It has that You’ve Got Mail trope where you have two people who are talking with each other, but they're also enemies, but they don't really know it. And then it has a little bit of rivals-to-lovers, and the academic setting. My agent told me she really wanted to read an academic rivals-to-lovers from me; she saw me writing something like that because that’s my jam! So it wasn't really from fanfiction. It was very much my first book, and I know it's coming out as the second, but it really felt like my debut novel.

BTW: What are some of your go-to recommended books?

AH: Sherry Thomas is one of my favorite writers ever. She was such an inspiration to me because she writes a lot of books about women in STEM and in historical settings. I just truly love everything that she puts out. Christina Lauren, Lisa Kleypas… you'll notice that most of these are romance novels. I am obsessed!

I recently read Angelika Frankenstein Makes Her Match by Sally Thorne, and it's basically Frankenstein fanfiction. The most bonkers and delightful book, it's so good. I really highly recommend it. Another book that's coming out next month is Do You Take This Man by Denise Williams. Again, like fantastic romance novelists and enemies-to-lovers and I love it so much. Romance novels are such a joy for me.

BTW: How have independent bookstores played a role in your life?

AH: Independent booksellers have taken so much of my money and I'm not complaining about it. I have never not gone into a bookstore and spent all my money there! Honestly, I love it. The thing [with] independent bookstores is that you can get so many book recs and you can really find so much stuff. I tend to gravitate toward romance novels, and I have a pretty good idea of what's out there, but there are so many other things that I just don't know are out there. I usually find out through booksellers and opportunities at independent bookstores.

As an author, I can't even begin to thank independent booksellers for the way that they have sold my book and generally talked it up. So it's really twofold the way they have impacted me. Mostly the fact that I am poor because of all the money I’ve spent in indie bookstores, and I don't even regret it.