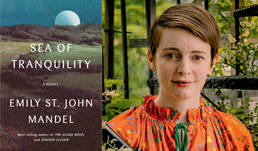 Independent booksellers across the country have chosen Emily St. John Mandel’s Sea of Tranquility (Knopf) as their top pick for the April 2022 Indie Next List.

Sea of Tranquility follows a cast of seemingly disparate characters on a journey that begins on Vancouver Island in 1912 and ends on a dark colony on the moon five-hundred years later.

“A gem of a novel, spiraling out of place and time to shape our present hopes and anxieties into a story of peace and resilience,” said Dan Brewster of Prologue Bookshop in Columbus, Ohio. ”Mandel weaves effortlessly between historical and science fiction and is a master of immersive storytelling.”

Here, Bookselling This Week talked about writing the book with Mandel.

Bookselling This Week: How did the idea for this story come to you?

Emily St. John Mandel: I’d been working on autofiction for a while, just as an experiment. I wasn’t sure I’d do anything with it — it seemed like the sort of thing that might be the seed of a new book but then not end up being part of the final version, which isn’t that unusual for me in starting a new book. At the same time, I’d been thinking about writing a time travel story.

Time travel narratives tend to fall apart under close scrutiny, but it seemed to me that if I were to add the simulation hypothesis, that might be a way to make it work. Having a character say “we’re not sure why time travel works as well as it does, because it seems to us that sending someone back in time should always create a closed loop and yet somehow it doesn’t” was a way to make it work.

BTW: Like some of your other work, this book navigates multiple timelines: we explore North America two centuries ago, in 2020, and centuries into the future. What drew you to these time periods? Why structure a novel in this way?

EM: The structure of this novel was based on David Mitchell’s Cloud Atlas, which is one of my favourite books. I admire the symmetry of the structure, and the vast scope of time, from distant past to distant future, and I wanted to see if I could structure a novel in the same way, with a similar sense of scale.

BTW: What was the experience of writing this book like for you?

EM: This novel was something like a refuge for me. I wrote it almost entirely during 2020. I live a mile from a hospital in New York City, so for the first several months of the pandemic there was a backdrop of constant sirens, all day and all night. There was a week in April when seven-hundred people died every day in my city. So it was an atmosphere of death and calamity, and it meant a lot to me to have this project I could immerse myself in. It was something to focus on aside from the nightmare we were living in.

BTW: What made you want to return to the cast of The Glass Hotel?

EM: I like those characters and wanted to spend more time with them.

BTW: Reading the author Olive Llewellyn’s sections, I couldn’t help but notice parallels to your own work — Marienbad feels similar to Station Eleven, for example, and you’ve spoken about requests for op-eds in the weeks directly following lockdown, something Olive also deals with. What were your intentions in writing Olive’s character?

BTW: This book, like Station Eleven, also incorporates genre elements. Does anything in particular inspire the exploration of sci-fi in your work?

EM: I’ve just always loved the genre. There was a long period in my late teens when I only read sci-fi. My reading preferences have expanded since then, but I still think of it as the genre where you get to go to the furthest limits of imagination.

EM: No. An idea I really like is that ten readers might read one of my books and come away with ten different ideas of what the book was about. I don’t write books with a single take-away message in mind.

EM: Independent bookstores are among my favourite places in any given city and I love visiting bookstores when I’m traveling. It’s just such a pleasure to spend time in those spaces. My first three novels were published by a very small press, and I’ll never forget how independent booksellers championed those books and am forever grateful for the support that has continued throughout my career.

EM: I’m working on a new novel. I’m also writing a screenplay with a friend of mine — it’s a noir adaptation of my first novel, Last Night in Montreal.