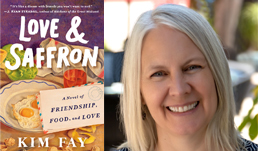 Independent booksellers across the country have chosen Kim Fay’s Love & Saffron: A Novel of Friendship, Food, and Love (G.P. Putnam’s Sons) as their top pick for the February 2022 Indie Next List.

“Love & Saffron reminds us of the beauty of letter writing,” said Annette Avery of Bright Side Bookshop in Flagstaff, Arizona. “I loved the simplicity of this book — it filled my heart with love and connection to the human spirit, and left me with the desire to kindle a friendship by sending a letter.”

Here, Fay discusses her process with Bookselling This Week.

Bookselling This Week: Where did the idea for this book come from? Was it always structured entirely in letters in your mind?

Kim Fay: My dear friend, the writer Janet Brown, and I have been corresponding faithfully since 1995 when we both left The Elliott Bay Book Company in Seattle — me to teach English in Vietnam and she to teach English in Thailand. A few years ago, when Janet had a milestone birthday, a vague idea floated into my head about writing something epistolary to honor that part of our friendship. Life happened, and the idea remained nothing more than that. Then came COVID and the lockdown in Los Angeles. Within days, I found myself writing a gift for Janet and another good friend, the food writer Barbara Hansen — a story told in letters.

I wanted a book that could serve as a balm. I wanted a book that could be read in a single afternoon. It would be based on Barbara (Joan in the book) and my great-aunt Emma (Imogen). It would take place in the early 1960s, and at the same time it would explore how close friendships and communion over good food can heal us during any era. Clearly, as the pandemic exploded and social unrest tore across the country, I was trying to reassure myself that there was still beauty in life. As I wrote, the story poured out so quickly it was all I could do to chase after it to the end. The letters wanted to be written, so I wrote them. The third-person section in the middle wanted to be written, so I wrote it. I am usually a painfully slow writer, someone who writes layer upon layer and can’t produce anything without a dozen revisions. But in this case, apparently, my subconscious had been hard at work for a long time because Love & Saffron came out fully formed.

KF: So much of what went into Love & Saffron was already in my head when I started writing. I adore L.A. history and am a member of the Los Angeles Conservancy and Culinary Historians of Southern California. I collect vintage L.A. guidebooks, and I’ve spent more than a decade pestering Barbara for details about her life. I had a strong foundation for the L.A. portion, and as for the Pacific Northwest, it’s my home and my heart. I have precious memories of childhood weekends at Camano Island; I shopped at Frederick & Nelson and Shorey’s bookshop before they closed; I read and reread the works of Angelo Pellegrini long before he showed up in this book. During the writing, I did have to hop online to confirm some of the details and dates. For that I leaned heavily on the historical archives of the Los Angeles Times, The Seattle Times, and the Seattle P-I.

BTW: Of course, as the title suggests, much of Joan and Imogen’s friendship centers on sharing recipes, while broadening their cultural understanding of the cities they live in. What made you want to write about food? And how do you approach writing about cultures that aren’t your own?

KF: I’ll start this answer with a confession. I’m not a great cook. I’m a good cook, but it doesn’t come naturally to me. I love food, though, and I love food literature. Ever since reading Laurie Colwin and M.F.K. Fisher back in the early 1990s, I dreamed of writing a novel centered on food, but I could never find the right story. Once again, Love & Saffron came to my rescue.

I try to approach writing about different cultures the way I approached discovering them for myself when I was young: with curiosity and openness. Small town, strip mall, five-for-a-dollar paperback bookshops didn’t offer much by way of variety back in the 1970s, but if I found a book with a world different from mine, I inhaled every detail. I must have read Jenny Kimura and Mystery of the Emerald Buddha half a dozen times each when I was in junior high. In my early twenties I saved up enough money for trips to Europe and Asia before I moved to Vietnam in 1995. No matter where I traveled, the best way to learn about a culture was always through its kitchens and dining tables. They are common ground, a primal source of the interpersonal and physical sustenance every person on this planet needs to thrive. From tea, bread, and cheese for breakfast in Amsterdam to miến gà for lunch in Saigon, if you name a place I’ve been, I can tell you the dishes I shared, the conversations that accompanied the meals, the people I had those conversations with, and the lessons those conversations taught me.

KF: This answer could take pages because The Elliott Bay Book Company in Seattle changed my life and shaped who I am today. Growing up I was a voracious reader, but I wasn’t one of those fancy pants who read Virginia Woolf by the age of twelve. I gobbled Nancy Drew, Beverly Cleary, Judy Blume, teen romances, Harlequin romances, and Gone with the Wind. I also wrote my first novel at the age of twelve and kept writing through junior high, high school, and college. My writing reflected my reading which reflected the limited access I had to diverse books in the small towns I grew up in.

Then, in 1989, a year out of WSU, hating my work as a receptionist at an athletic supply company, I applied for a coveted seasonal gift-wrapping job at Elliott Bay. I got it! After the holidays, I was hired permanently. It takes my breath away to think about the amazing five years that followed. Not only how many different types of books I discovered, but also how many different types of readers. And the great joy of hand-selling a beloved book! One month I challenged myself to hand-sell 100 copies of Moon Tiger. Another month 100 copies of The All of It. My days were filled with conversations about books! My nights were filled with conversations about books! My co-workers and I gossiped about authors — Remember the A.S. Byatt/Martin Amis feud over his dental work? — the way others gossiped about movie stars! It was truly an exclamation mark era. It was as if I had been searching for myself all of my life, and in that store I found the me I was meant to be. There was no Amazon then, no algorithms — bookselling was solely about human connection, and all those books, all those people passionate about books, taught me new ways to think, to understand, to learn, and to accept.