A Q&A With Lily Brooks-Dalton, Author of December Indie Next List Top Pick “The Light Pirate” 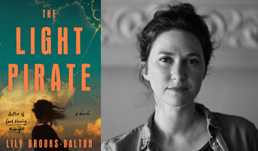 Independent booksellers across the country have chosen Lily Brooks-Dalton's The Light Pirate (Grand Central Publishing) as their top pick for the December 2022 Indie Next List.

The Light Pirate is a climate fiction novel following Wanda — born during the catastrophic hurricane she's named after — through adulthood as she navigates the changing landscape of not only her community in Florida and the earth as a whole, but of the evolution of civilization.

“A survivor of a book. In the not-too-distant future, Florida is hurricane central, and Wanda (a hurricane namesake) is in the eye of this story that wraps around you,” said Michelle Bear of Edmonds Bookshop in Edmonds, Washington. “You’ll hold on for dear life, with everybody else.”

Here, Brooks-Dalton discusses her writing process with Bookselling This Week.

Bookselling This Week: Your two novels, Good Morning, Midnight and the latest, The Light Pirate, explore dystopian and post-apocalyptic worlds caused by the impact of nature and science. What attracts you to this genre and writing about these topics?

Lily Brooks-Dalton: I’ve always been interested in the dark. Literally and figuratively. In both of these novels the literal dark is a vital part of the narrative. Both stories hinge on using nighttime and darkness in order to see light in a different way. And in a more figurative sense, I am drawn to looking directly at this powerful anxiety that is flowing through our society. It’s impossible to ignore, and whether you attribute it to the climate crisis or to politics or to something else…whatever you want to call it, it is pervasive. In a culture that is hopelessly divided, this is perhaps the one thing we can all agree on. Something terrible is coming, is in fact already happening! And I think fiction is a medium that is uniquely suited to exploring that feeling of doom — hopefully without succumbing to it.

BTW: The four parts of the novel center Wanda’s life as she undergoes significant changes: birth, death, growth, loss, etc. As the earth changes, so does Wanda, her extraordinary gift, and the people she surrounds herself with — all mimicking adaptation and evolution of living things throughout time to survive. What made these ideas of evolution and survivalism essential for you to include?

LBD: I appreciate this question because the ideas of evolution and adaptation were always the centerpieces of this book for me. I wanted to create a narrative that could place the evolution of an ecosystem alongside the adaptation of the humans living within it and try to do justice to both stories, showing how they are interconnected even though the timeline of a human life is so short compared to the lifespan of something like an ecosystem.

Survivalism is an interesting word to talk about because I think our relationship to it has changed somewhat recently. On the surface, survivalism is just the practice of survival skills, right? But it has often had this connotation of describing someone separate from society, maybe a little unhinged, seeing disaster everywhere. I remember poking fun of my Dad when he started stockpiling canned goods ahead of Y2K. But now…this kind of preparatory behavior seems more like common sense than overkill. We have seen so many reasons to be prepared for the worst these past few years.

And so when you get past the societal commentary that is attached to survivalism, when you consider that word in its essence, as having the will to survive…well what is more intrinsic to evolution than that? For me, these two ideas go hand in hand and are focal to the story I wanted to tell.

BTW: This story, in a way, is an homage to the beauty and power of the earth, bringing humanity back to simplicity and the elements guiding them instead of the reverse. The events in the story are a reset, “The great rewilding, as she likes to call it. Humans have spoiled so much, but nature is resourceful. It dies and is reborn as something new.” Can you talk more about your relationship with nature, "the great rewilding," and what the natural world can teach us?

LBD: I grew up in a very rural place in Vermont, so being surrounded by nature and having an intimate relationship to that wilderness was a formative experience for me. Now, I live in Los Angeles, which is of course one of the biggest cities in the world, but I still see nature everywhere. Human beings are nature, too. The things we make — also nature. If a beaver dam is nature, then so is a building. It’s a little weird to think of it in those terms, but I think it’s important not to set ourselves as people completely apart from the world we inhabit.

That said, some kinds of nature are self-sustaining and mutually beneficial to the ecosystem at hand. Others are not. The spotted lanternfly is an invasive species that is wreaking havoc on the environments it has infiltrated, and human beings aren’t that different. So, the simple answer is to eradicate the species which is harming the ecosystem, right? But, obviously we are all invested in our own survival, so is there another option? How can we transform ourselves into a species that is contributing to balance in our own ecosystem rather than destroying it? Those were some of the questions I had going into this book.

BTW: In the novel, we see a dystopian future where climate change is in full force and the toll it takes on man-made structures and processes. Small towns are dying and their resources are cut off, while cities are not too far behind. Can you share more about the difficult choices both Wanda and her brother, Lucas, make as far as the role they believe they play in this new reality, home and abroad?

LBD: It was important to me to show different characters handling this dissolution of society differently, because of course there is no one right way to respond to something like that. Lucas is fixated on saving a certain way of life. He wants to leave his hometown in order to acquire the skills to do something about the collapse that is occurring. To him, the unraveling of society is the worst case scenario. He wants to fix the system that is falling apart before his eyes. To change it, yes, but essentially to continue it in some revised format.

Wanda sees a future beyond the collapse. She isn’t looking at societal structures in the same way, she’s looking at environmental structures. She’s grown up with this slow decline, so there’s no moment she can remember where things were good. She’s not trying to return to a status quo. Rather, she’s invested in moving beyond a structure that she has never seen work for her or her community. Sometimes things need to fall apart in order to be remade. Wanda sees that in a way that her other family members don’t.

BTW: In Wanda’s childhood, she naturally gravitated towards books and reading as part of her self-education while learning about “the field” from Phyllis. As she gets older and the landscape changes, stories from Before are shared and passed down. How have reading and storytelling — and specifically, independent bookstores — played a role in your life?

LBD: It will surprise exactly no one to say that reading has been a hugely important part of my life. It’s hard not to sound like a cliché talking about this, but we’re all book lovers here so maybe that’s okay. I have had some of the most transformative experiences of my life inside a book — meeting a character that I love or  discovering a world that I couldn’t have imagined on my own or encountering a twist that I just did not see coming. I like all kinds of books — genre, realism, literary, commercial, whatever. Children’s books, YA, adult. I am passionate about reading widely.

Indie bookstores are the gateway to the story drug for a lot of people, myself included. I remember going to the local bookstore when I was growing up, which was probably thirty minutes away, and feeling like I was visiting some mythical landscape (shout out to Bartleby’s Books in Wilmington, VT). Sometimes we just went to look, but sometimes I got to take something home.

Bringing a new book home will never stop feeling special. It’s a sacred tradition! I have to introduce it to my other books, find the right spot for it, make sure it’s comfortable, offer it tea, etc. Independent booksellers are so dear to me — for their passion, for their thoughtful recommendations, for putting on such special events. When I heard that The Light Pirate had been chosen for the Indie Next List I’m not even a little embarrassed to say that I wept. Seeing the responses to the story from the booksellers I am so in awe of already was truly extraordinary, so thank you.