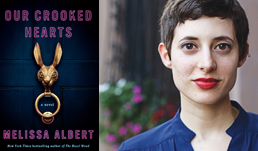 Independent booksellers across the country have chosen Melissa Albert’s Our Crooked Hearts (Flatiron Books) as their top pick for the July/August Kids’ Indie Next List.

Our Crooked Hearts follows seventeen-year-old Ivy as she uncovers the mysterious and supernatural past of her mother and the secrets told to protect a tragic event from dark forces.

“In a tale of magic and betrayal reminiscent of The Craft, Melissa Albert masters blending magic and reality yet again,” said Megan Irland of The River's End Bookstore in Oswego, New York. “Two storylines — past and present — converge into one when a mother’s past mistakes come back to hunt her daughter.”

Here, Albert discusses her process with Bookselling This Week.

Bookselling This Week: What was your experience like switching gears from The Hazel Wood series to Our Crooked Hearts (a standalone book)?

Melissa Albert: The Hazel Wood series started with a duology. So, across the two novels, I have been very much in that world and it’s a world of urban fantasy and it’s the world of portal fantasy, which is my joy. I just love contemporary portal fantasies; I can’t resist them. But then between writing that duology and writing Our Crooked Hearts, I worked on Tales from the Hinterland, which is like a short-form collection of fairy tales. It's the book that kind of is the central piece, the central mystery in The Hazel Wood series. And I really think that kind of gave me a chance to get some distance from the novel world of The Hazel Wood. And then when I set out to write my first kind of non-Hazel Wood book, Our Crooked Hearts, I started writing that in the deep of the pandemic.

Honestly looking back, it’s probably the happiest writing experience of my life because it was such an escape. And I had at that point, enough distance from the Hazel Wood world to completely immerse myself in something new. And I kind of approached it in the same way that I approached my reading during the pandemic, which was everything I read had to be page turning. Which for me, what keeps the pages flying is genre elements, that’s my passion. I was reading a lot of Thrillers, Horror, Mystery, and Fantasy novels. I wanted to work on something that contained all of those elements to excite me and keep me going back to the world every day with a reader’s perspective in mind — like what would I want to read, what would shake me out of my existential terror during a pandemic and parenting during a pandemic? The experience was, despite the surrounding static of the pandemic, such a great writing experience. And I look back on it with extreme gratitude and fun.

BTW: At the heart of this story, Our Crooked Hearts is about a mother/daughter relationship. Why focus on this family dynamic?

MA: The story started with Ivy’s story. I wanted to write a suburban fantasy. I’ve written previously urban fantasy, but while I was born in Chicago, I grew up in the suburbs. I wanted to write a book that had that noir-ish crackle of an urban fantasy, but with that deeply specific suburban setting — like parking lots at night and the Denny’s sign lit up. All that stuff that I grew up around, and I always found to have that uncanniness that I love to read in a story. But as I was writing the story, I wasn’t sure what the magic would be like at the beginning. I find it as I write. At one point, I thought I would experiment with her mother having a past that would affect Ivy’s story.

When I sat down to write what I thought would be one chapter of Dana, sitting down at the kitchen table relaying something that happened to her in her childhood, as I wrote it, it was 5,000 words, [then] 10,000 words. I realized: Oh my god, this is half the novel. That kind of broke a wall for me. It determined so much about the book that I ended up making it this dual-timeline story. Dana’s story is almost a classic paranormal arc of another era, and Ivy’s story is the more modern interrogation of those paranormal stories that we love, the idea of aftermath and trauma. And magic was the cost, which makes it sound less fun than it is — I also wanted it to be very fun.

I think what was going on under that was just the anxiety of being a parent during the pandemic, being a fairly new parent. My son was two and a half when things went kablooey in 2020. I guess I was thinking a lot about the idea of what happens if you fail your kids. I was kind of playing that out with Dana’s thread, which went to places even more difficult to countenance than I anticipated when I first set out to write the book.

BTW: Our Crooked Hearts borders YA and New Adult. Can you talk about your preference for writing YA, and if adult titles are in the future?

MA: That’s something I’ve been questioning a lot, because I’m sure you have noticed a lot of YA authors are making phenomenal adult debuts. I just read Holly Black’s new book, Book of Night and there’s this kind of new trend of YA authors moving into adult. With this book, I can’t quite quit that terrain of young adult that has that vibe of firsts — not just the obvious first love, first kiss, but first betrayal by a parent. Everything is so new and it’s so rattling and fascinating to me. And there are so many great adult books that are written in that kind of age group. So right now, I’m still interested in that age group — whether I write it as an adult novel at some point, or switch entirely to adult characters, I’m not sure. But this one really split the difference and felt like it was fair game. It’s very much a YA novel, despite the fact that I follow Dana into marriage. I follow her through giving birth. I’m cheating a little bit on the borders of YA, but I think it works.

When I was a teen reader, the YA train was so different. I was reading Walker Percy and Erica John — teens read everything! YA is wonderful, but it’s not written just by teens, and it’s not all teens read. [It lives] in that border land that I wanted to write in, and I think it’s going to work for teen readers. YA has such amazingly wide borders. I previously worked for Barnes and Noble. I ran their YA content for a while. And I read broadly and I was, in my mind, collecting these really boundary-pushing YA books. I think a lot about Neal Schusterman’s Scythe series, a lot of them have scenes with entirely adult characters speaking to each other, no teen content in sight, but somehow it totally works. When you see something that doesn't seem like it would read as YA, [it] totally is. I like playing in that area of YA.

BTW: What was your inspiration for this magical and witchcraft world set in the modern day? What draws you to writing about twists on fairy tales and magic?

MA: When I sit down to write, it’s what comes. I love that idea of intrusions of magic into a recognizable world. I think it’s part of the formative reading of my youth, like Peter Pan and the Chronicles of Narnia are the books that come to mind. First, the portal fantasies, you know, books that start with the ordinary and become extraordinary. And now as an adult, The Magicians trilogy — that’s probably my favorite. It’s just that addiction to seeing the actual world through an altered lens, or the feeling of normalcy becoming uncanny and becoming increasingly creepy and increasingly difficult to ignore the shadows. The things probably come out of a desire to myself be catapulted into a portal world. And now that I’m old enough to not want that, I want to write about it and read about it.

BTW: As a former bookseller, how have independent bookstores played a role in your life?

MA: As a young suburban kid, I did not have access to independent bookstores. In my suburb we had Crown Books, and eventually we had a Barnes and Noble. When that opened, I was a teenager. It was huge and everybody wanted to work there. We all applied and only one of my friends got a job and it wasn’t me. Unfortunately — not that I still have an ax to grind — I would have been a bad hire at 16, to be honest.

Barnes and Noble was really my first almost-adult experience with a bookstore because I [was] old enough to drive to the mall and it anchored the mall. They had the comfy chairs, so back then, you could a cup of coffee and read and they wouldn’t stop you. It was very magical. But then as a teenager, I briefly lived in Iowa City and I got to experience the City Light Bookstore. That was probably my first independent bookstore [that] I really had a relationship with.

In my later college years, I moved to back to Chicago and I worked for Powell’s Bookstore. That was the dream job. I got to sit and she shoot the [breeze] all day with my co-workers and stock the shelves. It was like a very lovely, laid-back job where we just talked about books all day. It really cemented my love affair with a book. It’s funny, when I worked at Barnes and Noble, I knew what was coming up. I knew everything that was coming up with YA, a lot of what was coming up with fiction, and I kind of lost that joy of browsing because I couldn’t find new releases I didn’t know about. Now, a few years removed from Barnes and Noble, it’s amazing now I can browse bookstores again and be constantly surprised the way I used to be. Honestly, I prefer it. I just love it.

BTW: What is the core message or the theme you want readers to get from reading this book?

MA: When I work on something, all I want from you is to want to find out what happens next. My core message is: What happens next? Turn the page to find out! After I’ve finished the book, and other smart readers with distance read it, then I can read reviews and see in it things I put in that I didn’t know. Themes emerge and ideas emerge. Every writer kind of discovers that you write things you didn’t know that you felt or didn’t know that you knew. It’s always a wonderful discovery process for me, figuring out what the hell the book is about after I’ve written what I hope is a page-turning, engaging story!