Last week, the Small Business Majority (SBM) held its first-ever Small Business Leadership Summit. Participants convened in Washington, D.C., from May 11 through May 13, at both the National Press Club and the White House. Among those attending were incoming ABA President Betsy Burton of The King’s English Bookshop in Salt Lake City, Utah; Bradley Graham of Politics & Prose in Washington, D.C.; Christin Evans of The Booksmith in San Francisco and Kepler’s Books in Menlo Park, California; and Kris Kleindienst of Left Bank Books in St. Louis, Missouri. 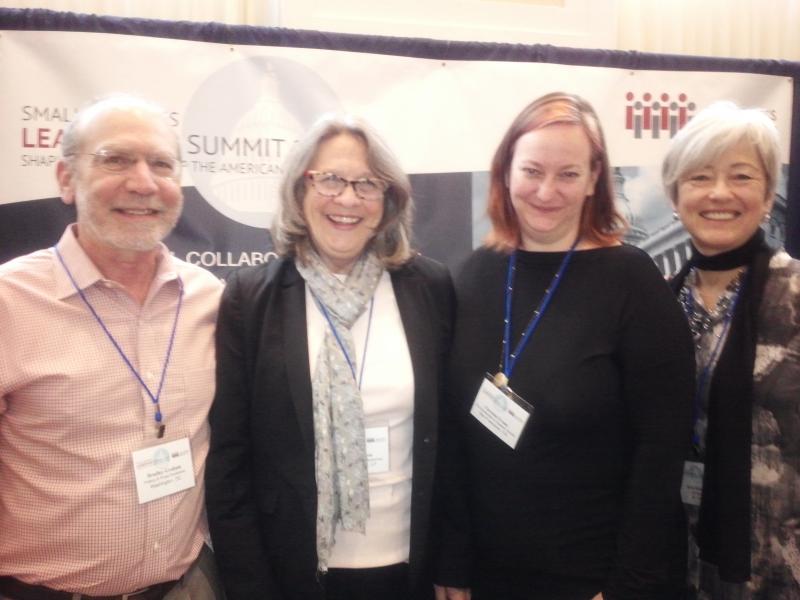 “Small Business Majority’s 2015 Small Business Leadership Summit brought together small business voices from every corner of the country and the economy,” said Chris Armstrong, director of partnerships and government affairs for the Small Business Majority. “An important voice that contributed to our Summit was the four members from the American Booksellers Association in attendance. They did a great job bringing the views of independent bookstores to the table. They really helped drive our discussions on issues, such as access to capital, that will enhance our conversations with policymakers and ensure the small business voice is heard in Washington.”

Politics & Prose’s Graham told BTW: “The two-day conference provided a useful overview of some of the issues facing small businesses nationwide. Noteworthy were large-panel discussions on the difficulties of obtaining conventional loans and the vagaries of the existing tax system. Smaller breakout sessions enabled us to zero in on some subjects of particular interest. One of the most lively breakout debates centered on workforce issues, especially the question of how to handle extended time off for employees.”

The Summit brought some 100 small business leaders from across the country to the nation’s capital for three days of education, collaboration, and discussion regarding a number of issues of import to small businesses.

Burton reported that, aside from booksellers, “a wonderful cross-section of businesses was represented, from an innovative media studio in Washington, D.C., to the owner of an organic ice creamery in Santa Cruz, a restaurateur in New York City to a small business accountant in Cincinnati (and did she have some good ideas!) and a small clothing manufacturer (pants for women, actually) in White Sulphur Springs, Montana.”

“I’ve been very impressed with the professionalism and advocacy of SBM,” Evans told BTW. “Over 100 small business leaders were represented and helped to inform a progressive political agenda. We heard from two senators and the head of the Small Business Administration — all powerful women — about the issues they are pushing for today, including improved access to capital, SBA loans, and tools.”

The Small Business Leadership Summit kicked off with an informal networking happy hour on Monday, May 11.

John Arensmeyer, founder and CEO of Small Business Majority, kicked off the day’s educational sessions with some opening remarks. Then the educational sessions began with the panel “Access to Capital: The Key to Entrepreneurship and Economic Development.” Other panels focused on tax policy to spur economic growth and critical workforce issues, such as health care and minimum wage.

“There were two terrific panels, one on access to capital, the other on taxes, budget, and the economy, along with several breakout sessions,” said Burton. “The emphasis of the day was, in one form or another, on access to capital — which everyone seemed to agree was the single most pressing issue for small businesses.”

“In terms of the keynoters, we heard first from Minnesota Senator Amy Klobuchar (as funny as Al Franken — progressive and impressive!) and New York Senator Kristen Gillibrand (an articulate feminist and a visionary),” Burton said. “Both were so smart it was hard not to think what a great ticket they’d make some day in a presidential election.” In the afternoon, SBA’s Contreras-Sweet spoke and then fielded questions for several minutes on everything from how the SBA defines “small” business to new loan programs.

Graham appreciated that the conference brought participants face-to-face with several senior administration officials, including Contreras-Sweet and Jason Furman, chairman of the Council of Economic Advisors. “Not only could we hear their take on administration plans to improve conditions for small businesses, but they also received an earful of concerns from us,” he said. “The same was true in a discussion on existing tax policy led by Mark Mazur, an assistant secretary at Treasury, and Seth Hanlon, a special assistant to the president. But while these officials spoke sympathetically of the need for legal and administrative changes, there was a sense that the current polarized politics of Washington make major reforms unlikely, at least in the near term.”

The final day of the Summit, Wednesday, May 13, started with a half-day visit to the White House at which small business owners had an opportunity to engage directly with senior members of the Obama administration. “At the White House the next day, where the program began with a welcome by Valerie Jarrett [a senior advisor to President Barack Obama] … the morning was solidly informative in terms of the economy and also the environment,” Burton said.

The event concluded with optional training at Google’s Washington, D.C., headquarters, on how small businesses can create, and make the most of, an online presence.

Policy recommendations identified at the summit will be incorporated into Small Business Majority’s policy platform — the Small Business Economic Agenda for 2015–16  —  and then released to the media and shared with decision-makers to elevate issues of importance to small business owners.

Overall, the booksellers attending the Summit seemed energized by the shared information and policy discussions.

“Kudos to the Small Business Majority for a blissfully good convocation of small business owners, whose livelihoods depend on the issues addressed during the Summit, and of experts and policymakers, who impact those issues,” Burton said.

Evans said, “I’ve been thoroughly impressed with the content of the policy discussions we all had here and am optimistic that SBM will be able to make progress on some of these critical issues for our small businesses.”