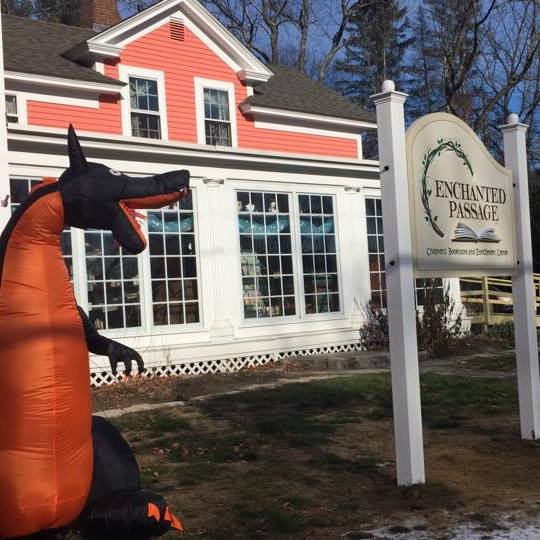 Sutton, Massachusetts, is home to the new bookstore and enrichment center Enchanted Passage LLC, which opened in December in a brightly colored Victorian home from 1824, reported the Worcester Telegram.

Mother-and-daughter team Sandy Loomis and Kimberly Cake attended the ABC Children’s Institute in 2016 to prepare for the store’s opening. Loomis had worked as a mental health counselor for adolescents and families for 30 years, and Cake as a middle-school teacher for 20.

The house, formerly home to Vaillancourt Folk Art and, before that, a boys’ school, is made up of a series of rooms filled with books, both fiction and nonfiction, and includes a small snack area. Different rooms have alluring names, such as Mystery Manor, which houses suspense and mystery stories, and Outer Limits, which features space and science titles. “As soon as we walked in the door, we knew it would be the place. It has a lot of synchronicity,” said Loomis.

Event opportunities include parties, baby showers, special guests, workshops, and educational programs, as well as a low-stimulation time for children with special needs on Wednesday mornings. “It is important that everyone feels comfortable,” said Loomis.

Paul Ingram, a familiar face at Iowa City’s Prairie Lights bookstore for the past 27 years and a bookseller for more than four decades, retired just before the start of the new year, reported the Iowa City Press-Citizen.

In addition to his work at Prairie Lights, in 2014, Ingram published The Lost Clerihews of Paul Ingram with Ice Cube Press. In 2015, he received a grant as part of author James Patterson’s Holiday Bookstore Bonus Program.

Ingram said he plans to spend more time with his wife, Ellen Heywood, and their grandchildren, but he still intends to frequent the bookstore.

Readers of Oregon’s Coast Weekend have chosen Lucy’s Books in Astoria, Oregon, as the 2016 Readers’ Choice for Best Bookstore. The shop carries fiction and nonfiction, local titles, and children’s books and plush items.

“We don’t specialize. We have a little bit of everything,” said Lisa Reid, who has owned the bookstore for three and a half years. “We are a small shop. If I don’t have it, I will find it for people. We do a lot of ordering.”

The Red Door on the Move

Glenn Shepherd, owner of The Red Door Books & Local Art in Saxapahaw, North Carolina, is relocating the store to the city of Mebane, about 13 miles north, reported the Times News.

Shepherd hopes for brisker business as a result of the move. The store, which advertises itself as the only independent bookstore in Alamance County, will reopen in its new location the first week of March.