Earlier this year, Leslie Huerta quit her job in the travel industry to fulfill her dream of opening a bookstore in Lincoln, Nebraska. The general interest bookstore, to be called Francie & Finch Bookshop, will feature 1,500 square feet of selling space, a sizeable children’s room, and a varied selection of cookbooks.

“My focus is going to be books with a good story: literature, biographies, and memoirs, and also a large focus on the arts, including beautiful art and design books and architecture books,” said Huerta. “And, of course, the selection will also depend on what my customers want.”

A soft opening is planned for Friday, November 4, the same day as the downtown business district’s annual arts walk. To prepare for the event, Huerta, a patron of the Lincoln Arts Council, plans to put out a call for local artists who would like to sell and exhibit their work at the store. Later this year, she said, the neighborhood’s residents and other local business owners will be invited to a grand opening and ribbon-cutting ceremony and reception featuring live music.

The name “Francie & Finch” derives from two of Huerta’s favorite literary characters who happen to be children. “I just thought about different characters that have stuck with me: Francie from A Tree Grows in Brooklyn and Scout Finch from To Kill a Mockingbird are two. They’re both strong young women and reading was really important to both of them. I think most readers have characters like that who stand out to them.” Huerta also plans to create a special wall where people can tap into that nostalgia by sharing their own favorite literary characters. 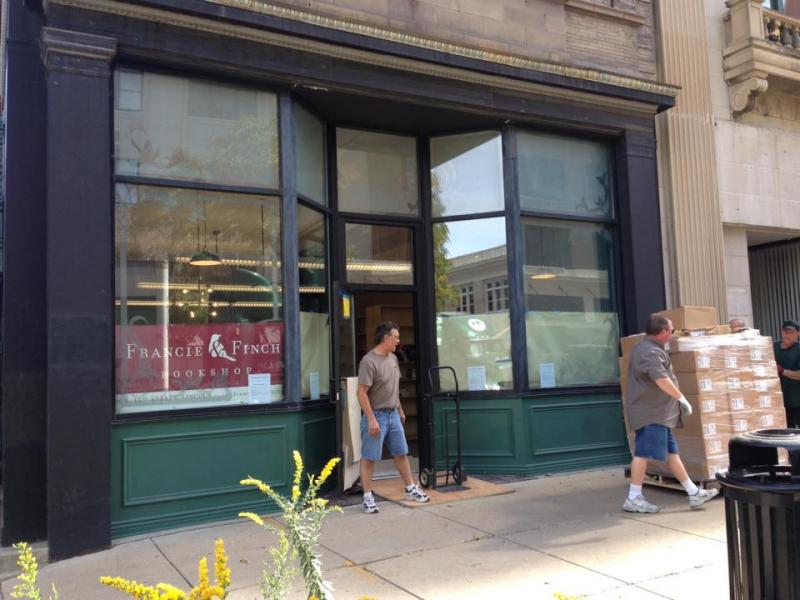 To prepare for Francie & Finch’s opening, Huerta attended a Paz & Associates “Owning a Bookstore Workshop” in 2015, Winter Institute 11 in Denver this past January, and this month’s Heartland Fall Forum in Minneapolis on a scholarship. Huerta said that at each event she was overwhelmed with “the community of booksellers who were so willing to help and so excited to help newcomers to get started.”

Locally, Huerta has made connections with the Downtown Lincoln Association, a nonprofit business organization; she has also met with local business networking groups and a SCORE business counselor and is currently looking to hire a team of part-time employees.

“It’s going to be me running the store, but I’m also trying to build a team of part-timers,” said Huerta. “For the holidays we’re going to need to have at least three because we’re going to offer gift wrapping.”

In addition to books, Huerta plans on selling all kinds of literary paraphernalia and gifts, including stationery, writing paper, pens, reading glasses, and coffee mugs, as well as art from local artists and a selection of literary and art magazines that can’t be found in the local Walgreens.

Huerta said she stumbled upon the perfect retail space for Francie & Finch when her company assigned her to work at its downtown office. One day, on a walk, Huerta noticed a beautiful building with 14-foot ceilings, an antique green fire escape, and a layout that reminded her of the Boulder Book Store in Boulder, Colorado.

“It’s kind of an iconic building but it has been empty for a while,” ever since the Lincoln Exchange Restaurant was shuttered, Huerta said. Renovations to the space have included knocking down the wall between the kitchen and the dining room to create Francie & Finch’s children’s room, which will be framed by a decorative archway.

The store’s location near the University of Nebraska-Lincoln, the local convention center, and the city’s municipal district provides a large concentration of professionals and students for her potential customer base, Huerta said. In addition, a thriving tech start-up scene in downtown Lincoln recently led to a new nickname for the area: Silicon Prairie.

“The city of Lincoln is a great place for entrepreneurship,” said Huerta, noting the many enthusiastic comments on Francie & Finch’s Facebook page that show just how excited people are to welcome a new bookshop to the area.

“When I first started thinking that it would be my dream to open a bookstore in Lincoln, I just couldn’t shake the idea,” said Huerta. “Eventually I quit my job so I could focus 200 percent on this… It’s a new business, but even more than that, it’s going to be a new lifestyle for my husband and for our family. We’re committed to building a little treasure here in Lincoln.”