Independent businesses experienced healthy sales growth in 2015, buoyed by their strong community ties and growing public awareness of the benefits of locally owned businesses, according to the Independent Business Survey, released on Wednesday, February 10, by the Institute for Local Self-Reliance in partnership with the Advocates for Independent Business. 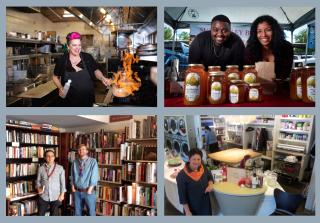 The survey, now in its ninth year, gathered data from more than 3,200 independent businesses, including bookstore members of the American Booksellers Association. Respondents to the survey reported brisk sales in 2015, with revenue growing an average of 6.6 percent. Among independent retailers, who comprised just under half of survey respondents, revenue increased 4.7 percent in 2015, including a 3.1 percent gain during the holiday season. The survey report noted that these figures were in sharp contrast to the performance of many national retail chains, and overall holiday retail sales, which, according to the U.S. Department of Commerce, rose just 1.6 percent in December.

The growth in revenue among independent businesses led to a significant increase in hiring, according to the survey report. Overall employment at responding businesses expanded by 5.6 percent in 2015, with more than 30 percent reporting the addition of at least one employee.

“Despite a number of challenges facing independent businesses, the ninth annual ILSR survey again demonstrates that locally owned Main Street businesses are resilient, growing, and successful,” said American Booksellers Association CEO Oren Teicher. “The innovation and hard work of entrepreneurs are paying off in businesses that are outperforming their chain competitors, fueling job creation, and ensuring that unique, livable communities continue to thrive. There are certainly challenges ahead, and it’s the responsibility of lawmakers to take steps to enact policies that will promote fair play, localism, and smart growth.”

Local First initiatives are part of what’s strengthening independent businesses, the survey found. Two-thirds of respondents in cities with an active Local First, or “buy local,” campaign said that the initiative is having a noticeable positive impact on their business, including attracting new customers and fostering increased loyalty among existing customers.

About one-third of businesses in Local First cities also said that the initiative had led them to become more engaged in advocating on public policy issues, and 44 percent said that the campaign had made elected officials more aware and supportive of independent businesses.

However, the survey found that independent businesses are facing a number of challenges, many related to public policy.

One major obstacle is a lack of credit for businesses seeking to grow. The survey found that one in three independent businesses that applied for a bank loan in the last two years failed to secure one. That figure was 54 percent among minority-owned businesses, and 41 percent among young firms, whose expansion has historically been a key source of net job growth.

Other major challenges cited by survey respondents include competition from large Internet companies — 70 percent of the survey’s retail respondents ranked Internet competition as very significant to their businesses —and large competitors that can use their market power to secure better pricing and terms from suppliers.

Majorities of the businesses surveyed said they would support legislation to cap the dollar value of the economic development tax breaks that companies are eligible to receive, and that they think regulators should more vigorously enforce antitrust laws against dominant companies.

The rising cost of commercial rent is another difficulty facing many independent businesses. Among retailers who lease their locations, 59 percent of the survey’s respondents reported being worried about the increasing cost of rent. The steep swipe fees set by credit card companies are also a challenge. A large majority of retailers favored government action to cap credit card swipe fees, as the E.U., Australia, and other countries have done.

“While these obstacles are certainly formidable, independent businesses have seen a remarkable increase in public awareness and support in recent years,” said Stacy Mitchell, co-director of the Institute for Local Self-Reliance. “In our survey, many expressed a determination to build on the momentum of the ‘buy local’ movement to press for policies that will give small, local businesses a better opportunity to compete and thrive.” (The full report can be downloaded here.)

To help booksellers build on the momentum of the local first movement, ABA is developing the education session “Indie Bookstores and the New Localism: What You Can Do” for its spring 2016 Booksellers Forums as well as an action kit that will help booksellers understand the implications of the new Civic Economics study, “Amazon & Empty Storefronts.” The kit will provide resources and data that will empower booksellers to communicate the “new” localism message to colleagues, customers, community members, elected officials, and the media.