Banned Books Week Heroes to Be Revealed During Virtual Read-Out 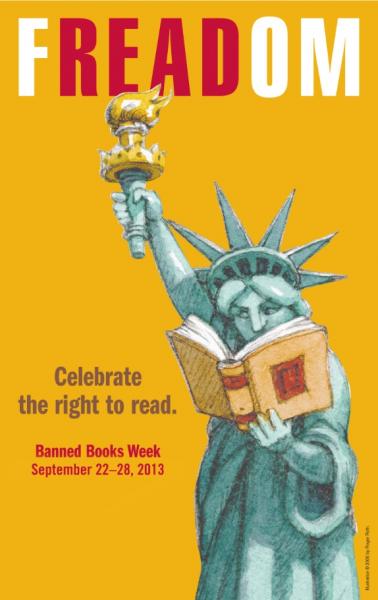 The annual celebration of Banned Books Week, this year from September 22 – 28, will again feature readers across the U.S. and around the world demonstrating their support for free speech  in a Virtual Read-Out of banned and challenged books.

Individuals will read from their favorite banned or challenged book, and participants, libraries, and bookstores will upload those videos at tinyurl.com/bbwvro13 for posting to the Banned Books Week YouTube Channel. Contributors are encouraged to share a reading, discuss the significance of their favorite banned book, or mention a local book challenge.

This year, the Read-Out will serve as the backdrop for the announcement of Banned Books Week Heroes. The Banned Books Week sponsors have identified outstanding individuals and groups who have had the courage to stand up for intellectual freedom and have defended their freedom to read.

“We are very excited about this year’s Banned Books Week,” said Chris Finan, president of the American Booksellers Foundation for Free Expression, a sponsor of the annual event. “Booksellers responded enthusiastically to the Banned Books Week in a Box promotion that was co-sponsored by the Ingram Content Group and ABFFE, including stores that have never participated before. This year, we are also honoring individual students and teachers from around the country who have fought censorship. There will even be Twitter parties on Monday and Wednesday that will make it possible for everyone to help us promote the freedom to read.”

More than 1,500 videos have been submitted since the Virtual Read-Out began in 2011, including many by bestselling authors. Sherman Alexie (Absolutely True Diary of a Part-Time Indian), Laurie Halse Anderson (Speak), and Kahled Housseni (The Kite Runner) are among those contributing new videos. Bookstores and libraries across the country are already participating in the Virtual Read-Out. Arizona’s Bookmans Bookstore produced the video “Bookmans Does Banned Books” (below) and Indiana’s Mooresville Public Library produced two promotional trailers. The videos may be seen at BannedBooksWeek.org

For the first time, Twitter parties will help promote the Banned Books Week message. A party will be held on Monday, September 23, from 10:00 a.m. to noon, Eastern Time, and a second party is scheduled for Wednesday, September 25, from noon to 2:00 p.m., Eastern. Supporters are urged to tweet using the hashtag #bannedbooksweek. More information about the Twitter parties is available on the Banned Books Week website.

More information about Banned Books Week, book challenges, and censorship is available from the ALA Office for Intellectual Freedom’s Banned Books website.