At the end of June, Barbara Theroux, the founder of Fact & Fiction in downtown Missoula, Montana, will be retiring after 40 years in the bookselling business; she will be handing over the reins of the store, which is now owned by the not-for-profit Bookstore at the University of Montana, to new manager Mara Panich-Crouch.

Theroux opened Fact & Fiction in 1986 on Main Street in downtown Missoula, after working for 14 years at the campus bookstores at Washington State University and the University of Montana. In 1998, she moved the store three blocks east to its current location in the historic Bluebird Building on North Higgins Avenue, and in 2007 she agreed to sell the business to the Bookstore at the University of Montana, which hired her to continue managing the store and developing the Fact & Fiction brand. 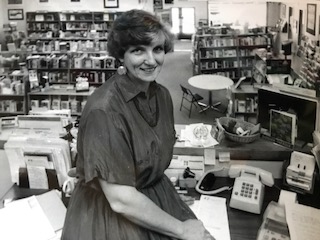 Fact & Fiction founder Barbara Theroux in her early days as a bookseller.

Theroux has long been an active member of the American Booksellers Association and a familiar face at the organization’s events. She served as an ABA Board member from 1984 to 1986 as a college bookseller, and from 1991 to 1997 as an indie bookstore owner. Theroux also served on the faculty of ABA’s Booksellers Schools, including an International Bookseller School held in Romania in 1994 that was co-sponsored by ABA and the Soros Open Society Foundation. Over her long career she has received many honors, including the Haslam Award for Excellence in Bookselling in 2000.

“I’ve had marvelous things happen during my career; some of the best experiences I’ve had have been as a bookseller,” Theroux said. Among the memorable moments was the excitement generated by The Last Best Place: A Montana Anthology, a 1987 collection of work on Montana and the West published by the University of Washington Press, which sold out its initial 500-copy print run, and throwing the store’s first Harry Potter midnight opening party during the height of the series’ popularity. 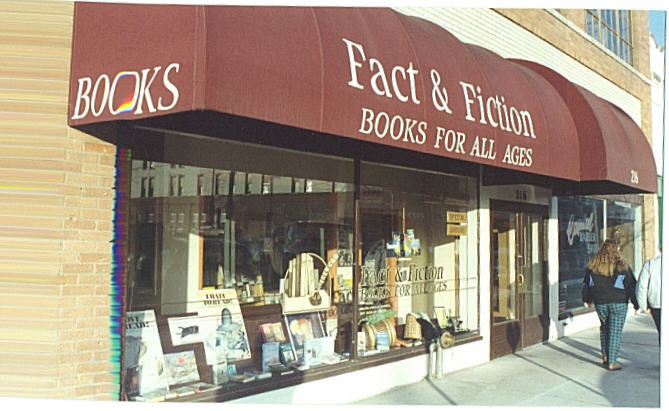 Theroux also recalled some of the challenges: working with the mayor and the university after the 2015 publication of Jon Krakauer’s Missoula, an exposé on the University of Montana’s handling of sexual assaults on campus. Although some advised against it, the store sold the book during that tense time and did everything possible to balance respect for the victims (including donating some of the proceeds to the university’s health center) and sensitivity to the people of Missoula who were upset about the book.

Theroux said she will always remember what happened at an off-site event for the author: When Krakauer stepped on the stage, 80 percent of the 600 people in attendance gave him a standing ovation, she said. That time in the store’s history “defined a lot about what Fact & Fiction stood for and what I believed in,” Theroux said.

As she gets ready to retire, Theroux said she is introducing Panich-Crouch to the store’s sales reps and contacts so that she won’t be going in cold when it comes to booking events and author visits. 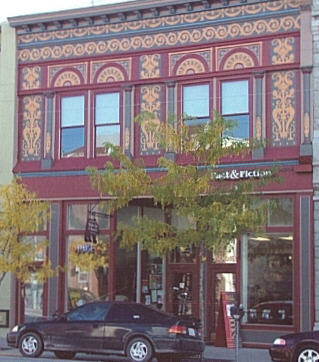 “Fact & Fiction has a good reputation for hosting events and doing interesting things and I just want those sorts of things to continue,” Theroux said. “Mara is great with that and she is very creative as well.”

Theroux told Bookselling This Week that she will remain in Missoula during her retirement and will continue her work with the Montana Book Festival and the campaign to build a new, local library. She may even start a book recommendation blog.

“I still love and still have a passion for bookselling but as one gets older and goes through things you kind of get jaded, so it is time for the store to take on some fresh energy,” said Theroux.

Panich-Crouch will take over management of both Fact & Fiction locations: Fact & Fiction University Center, which is part of the campus bookstore, and Fact & Fiction Downtown, on North Higgins Avenue. As a graduate student, Panich-Crouch worked as a textbook buyer and manager at the university store; now, after spending 18 months in training under Theroux, mostly at the downtown store, she will take over management duties for both stores, which will entail checking in at the university location once or twice a week to manage student employees. 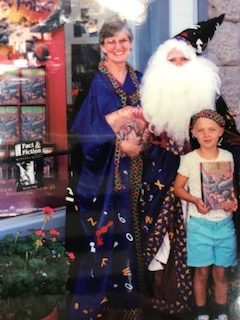 “It’s been great working with Barbara,” said Panich-Crouch. “She is kind of an institution in town and in the bookselling world, so she’s had a ton of knowledge to share with me. It’s been great to have all this time to really get as much knowledge as I could.”

Once she is on her own, Panich-Crouch said she is excited to get started on a redesign of the downtown space.

“The store hasn’t been updated in a long time so I’m really excited to get my hands on it and start updating the physical appearance of the store to bring it into now,” she said. Going forward, added Panich-Crouch, the store’s core purpose will not change: to serve as a community bookstore where people can find the books they love.