This year’s Banned Books Week 2019 wrapped up on Saturday, September 28, and, by all accounts, the weeklong celebration was successful for independent bookstores. The 2019 theme, “Censorship Leaves Us in the Dark: Keep the Light On,” served as a reminder that censorship restricts access to information and encouraged everyone to pick up and read a banned book. 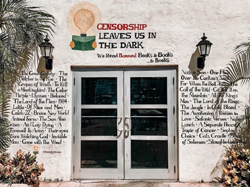 For Books & Books, which has eight stores in the Miami area and one in the Cayman Islands, Banned Books Week shows that independent bookstores are at the forefront of the battle against censorship. Mitchell Kaplan, owner of Books & Books, was recently a guest on the American Booksellers Association’s Counterspeak podcast for its Banned Books Week special episode to discuss the ways his store was celebrating the week. 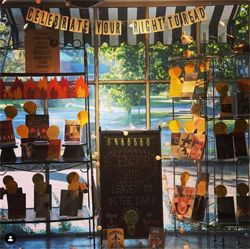 To pay tribute to Banned Books Week’s theme of shining a light on banned books, The Hickory Stick Bookshop in Washington Depot, Connecticut, created a display of banned books with paper lightbulbs popping out of the top. The back of each paper lightbulb gave the reason the book was banned, and the entire display was illuminated by white string lights.

Emelie Burl of The Hickory Stick told Bookselling This Week, “We always love [Banned Books Week], and this year was no exception. We always have amazing conversations with customers, many of whom don’t realize how prevalent this issue still is today.” Burl continued, “It always surprised us how many people are unaware that this happens and why.” 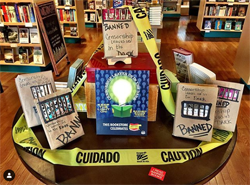 Avid Bookshop, which has two locations in Athens, Georgia, used social media to get the word out about Banned Books Week by posting the top 11 most-challenged books of the 483 books that were challenged or banned in 2018. The list includes Thirteen Reasons Why (Razorbill), A Day in the Life of Marlon Bundo (Chronicle Books), and The Absolutely True Diary of a Part-Time Indian (Little, Brown and Company). Avid Bookshop encouraged everyone to ask booksellers for recommendations of books that have appeared on the American Library Association’s Banned & Challenged List.

Banned Books Week was launched in 1982 in response to a sudden surge in the number of challenges to books in schools, bookstores, and libraries. Typically held during the last week of September, it highlights the value of free and open access to information. Banned Books Week brings together the entire book community in shared support of the freedom to seek and express ideas, even those some consider unorthodox or unpopular. By focusing on efforts across the country to remove or restrict access to books, Banned Books Week draws national attention to the harms of censorship.

The American Booksellers for Free Expression encourages all participating bookstores to continue to share photos of their displays and events using the official hashtag #BannedBooksWeek, as well as to send a description of their activities to abfe@bookweb.org.