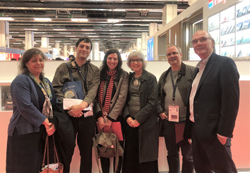 Last week, three independent booksellers visited the Frankfurt Book Fair, which was held October 16–20 in Frankfurt, Germany, on fellowships from Bookselling Without Borders (BWB): Jonathan Woollen of Politics and Prose in Washington, D.C.; Lesley Rains of City of Asylum Bookstore in Pittsburgh, Pennsylvania; and Chris McDonald of Bear Pond Books in Montpelier, Vermont.

In February, Bookselling Without Borders announced 14 bookseller recipients of fellowships that would send them to international book fairs and residencies in order to connect booksellers to the global literary conversation and through them to widen Americans’ perspectives of diverse and international literature.

Founded by Europa Editions in 2016, these scholarships enable U.S. booksellers to take part in a program of specially designed tours, panel discussions, and meetings with international authors, publishers, and booksellers. The program recently expanded to include the Istanbul Book Fair, the Bologna Children’s Book Fair, and a residency in India that includes the Jaipur Lit Fest and Delhi Book Fair.

More than 200 booksellers applied for the 2019 scholarships in just two weeks, representing 145 bookstores in 39 states and the District of Columbia. Winners were chosen by the program’s supporting publisher partners and Bookselling Without Borders.

For more information about the program, visit the Bookselling Without Borders website.