A bookstore in a small town in upstate New York is fighting efforts to force it to remove a banner from its front window that contains a message critical of Donald Trump. The message, “Trump. Make America Hate Again,” appears against the background of a swastika. 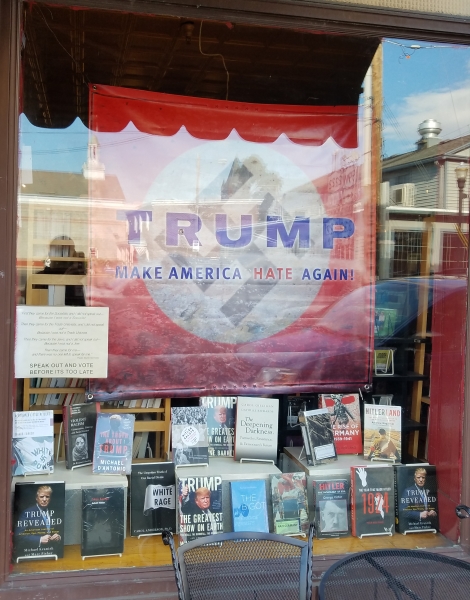 Brian Donoghue, the owner of Inquiring Minds Bookstore in Saugerties and New Paltz, New York, said the banner is intended to draw a parallel between Trump’s presidential campaign and the rise of Adolf Hitler. In addition to the banner, the display includes 18 books about Trump and the history of Nazi Germany. It includes signs that explain the purpose of the display and the famous quotation from Martin Niemöller about the dangers of not forcefully speaking out against hate.

Trump supporters, town officials, and the Anti-Defamation League (ADL), a group that fights anti-Semitism, have strongly criticized the use of the swastika. On October 18, two dozen people picketed the bookstore demanding that the banner be removed.

Donoghue believes that town officials have violated his rights under the First Amendment and he has requested help from attorneys for Media Coalition, a trade association that defends the free speech rights of booksellers and other producers and distributors of media. The American Booksellers Association is a founding member of Media Coalition.

Donoghue said he created the window display that includes the banner after he became alarmed by televised reports of Trump rallies. “I really felt I was in prewar Nazi Germany. I saw neo-Nazis there. I saw absolute hate, and it scared me for my family. It scared me for my children’s future,” he said.

“Hitler was able to tap into the frustration of the German people by zeroing in on a target, the Jews. Trump is able to tap into a similar fear among some in America, except now the target is not Jews but simply ‘the other’ — Muslims, blacks, Latinos, women, LGBT, or anyone else who does not agree with him,” Donoghue said.

“To me, the swastika is a potent and relevant representation of what is happening to America,” he added. “I am sorry if it causes pain for any member of my community. But its purpose is to encourage debate about what I believe is the grave risk that our country faces. Democracy can be preserved only by vigorous, sometimes painful, debate.”

The ADL criticized the use of the swastika in the bookstore display in a press release issued by its New York regional office. “Using the symbol of Nazism is highly inappropriate and repugnant,” Evan R. Bernstein, the ADL regional director, said in the release. “There are better ways to make a point about the election and the candidates’ views without drawing a comparison to a genocidal regime.”