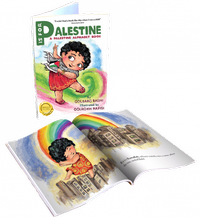 Last month, the owners of Book Culture in New York City came under fire for selling the children’s book P Is for Palestine, written by Goldbarg Bashi and illustrated by Golrokh Nafisi.

After Bashi announced on November 18 that she would hold a reading of the book at Book Culture, the Stephen Wise Free Synagogue announced that in light of the store’s decision to carry the book, it would bar Book Culture from participating in a book fair at the synagogue’s preschool. The fair had been scheduled for early December, reported the Times of Israel.

The article went on to note that some Upper West Side residents were most upset about the book’s “I is for Intifada” page, in which the text reads: “I is for Intifada, Arabic for rising up for what is right, if you are a kid or grownup!” The Times of Israel noted that the word is offensive to Jews because “‘Intifada’ connotes two separate bouts of prolonged Palestinian violence and terror from 1987–1991 and 2000–2005.” The Times notes that during these two periods, some 1,300 Israelis and 6,000 Palestinians were killed.

However, Bashi dismissed accusations that her book promoted violence or anti-Semitism. She told the Times that she sees intifada as referring to a broader cultural and nonviolent Palestinian resistance to Israel’s occupation. Western media, she said, tend to emphasize Palestinian violence while not covering peaceful protest.

Ultimately, after Book Culture co-owners Chris Doeblin, Annie Hedrick, and Rick MacArthur met with the Stephen Wise Free Synagogue, they agreed to issue a statement in which they stressed that they opposed terrorism and “other forms of violence perpetrated against Israeli civilians during the intifada or thereafter. Any impression from the book to the contrary is not our view.” The synagogue agreed to let them participate in its book fair after the agreement.

The statement did not quell the controversy, however. As of press time, BTW learned that a pro-Palestinian student group launched an online petition demanding that the Columbia University community boycott Book Culture until the store owners retract the statement placed on the synagogue website.

Bookselling This Week spoke with Doeblin via e-email about the incident and the importance of bookstores standing up for free speech in the current climate.

BTW: Attacks on free speech are frequently in the news these days. Have you seen an increase in people trying to dictate the books you do or don’t sell? Or is this particular incident a one-off situation?

Chris Doeblin: I think we are seeing a single incident. Because our stores began at Columbia University, we, I, are aware of strife regarding any Israeli or Palestinian book or comment. As the home of the late Edward Said and a strident pro-Israel student group as well as Arab and pro-Palestine students and faculty, there is always some eruption going on. I think it is fair to say that there is a swift, potent mob-like response to a number of issues, and one of the most vehement is the pro-Israel voice.

We were instantly vocal about the Charlie Hebdo murders in Paris, and I made two enormous signs with an eight-foot fist holding a pen that said “Je suis Charlie.” At our Columbus Avenue store, it was widely accepted and even praised. We received several days of round-the-clock police presence in front of the store when we stated we had ordered and would sell copies of the paper when they arrived from Paris. Our partner in that store is Rick MacArthur, the publisher of Harper’s magazine. His mother is French, so I called the day of the murders and asked if he knew someone in Paris who could get us copies quickly. We had copies in the store ahead of everyone, in just a day or so.

Rick and I were instantly in sync on the issue and the need for us as booksellers to make a point and be totally unambiguous on the need to defend freedom of expression. But at our uptown store on Broadway, which is two blocks from the main gate of Columbia, the Arab or Muslim supporting voices and many others mobbed the store and our e-mails and denounced our staff for having the poster and taking that position. The point seemed to be that Charlie Hebdo was offensive and could not be defended, which is shocking and indicative of our times; this symbol of freedom, the great liberal university, had a significant number of voices that, even after the heinous murders, wouldn’t countenance our support.

So, roll that along to Milo Yiannopoulos prior to his book being canceled. I stated to our staff that we were going to put a big stack on our table precisely because people in our liberal neighborhood said the book should be banned. Our staff was not willing to support that notion, but the book was canceled. As you know, he was derided at many campuses and was a litmus test for university communities on respecting the freedom of expression, which they (our America) have profoundly failed.

BTW: Do you think it is imperative that booksellers lead the way in protecting free speech, given the current climate in the country? Why was it important to you to have P Is for Palestine available to potential readers?

CD: Yes, I do. It is more and more acceptable to stop listening, to disrespect other voices, other points of view, and claims to legitimacy. This is an especially viral and potent plague on our better angels in view of the new protectionism inside of our own circles. We have found it rational and compassionate to accept the claims and post the slogan “black lives matter,” but we do so in a context that is contradictory to the overall belief that there are “others” out there whose place in the world does not enjoy the privilege and opportunity that we do or of the rest of society.

I think the ideas and practices we need to support are tolerance, respect for others, the need to listen and try to interpret, an understanding that we are more alike than not. It is too easy for our communities to shun, by omission. I think it is inherent in what we do to lead the way in protecting free speech, but we have to make inclusiveness happen sometimes.

P Is for Palestine was brought to me by the author. She lives in our neighborhood and is married to a professor whom I have known for more than 25 years. She has read in our store very often and does a Persian story time for children of Iranian families. It’s small but enjoyed by those who attend. She has created sets of toy blocks in Persian and Arabic letters that we helped to sell and develop with her. Both our families have children close in age and we shared the same playgrounds and time in our bookshops together. She spoke about the book with me and ideas about how to publish it, and I acceded to a pre-publication purchase of 100 copies.

BTW: Did you expect such a strong reaction in opposition to the book?

CD: The reaction was a great surprise.

BTW: Do you have any update to the situation? Has the controversy died down?

CD: It is just about over I’d say, although we still get the odd comment in the store about it, from both points of view — one denouncing the book and us for carrying it and, also, from members of the same community, even the same synagogue, sharing their pride in being a member of a bookstore that will hold its ground.

The awful thing was that, after the onslaught of the “machine” that wound up to denounce the book, Book Culture, and Golbarg Bashi, a second onslaught began from the pro-Palestinian machine. Their focus was on denigrating us and the Zionist censors who would silence their voice and the false claim that we removed or hid the book intentionally. We remained dedicated to keeping and selling the book but sold out very quickly.

BTW: You met with the leaders of the synagogue and posted an explanation on their website. How did that come about?

CD: We serve the synagogue’s book fair for the school fundraiser and many of their congregants shop at our store. The rabbi was called to action and ask us to meet to explain our position. He asked us to agree to the statement — which they proposed and wrote. We were then reviled by the other side when it was published.

We sold out of the book. We are dedicated to carrying it and selling it. We have a great deal of interest in a conciliatory meeting at the store to talk about the issue with other community partners supporting both points of view.