The centennial Children’s Book Week (CBW), a national celebration of books for young people and the joy of reading, will feature Ayesha Curry, a New York Times bestselling author, television host, and mother of three, as its 2019 spokesperson and chair. 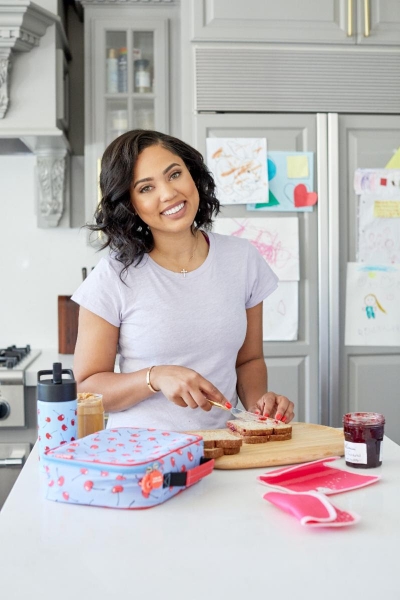 “I’m proud to serve as the spokesperson and chair for the 100th year of Children’s Book Week. My family is at the heart of everything I do and one of the things that we all share is a love of reading,” Curry said. “I remember reading and being read to as a child and that experience has shaped my life. As a parent, I love watching my children get excited about reading. With a book in their hands, they can travel to make-believe lands or read about people who make a difference.”

Curry is the bestselling author of The Seasoned Life Entrepreneur and host of Ayesha’s Home Kitchen on Food Network. Her list of must-read children’s books is posted now on the Every Child a Reader website.

Launched in 1919, Children’s Book Week is the longest-running literacy initiative in the United States and is organized by Every Child a Reader, the charitable arm of the Children’s Book Council (CBC). According to CBC executive director Carl Lennertz, this year, more than 1,000 independent bookstores, schools, and libraries in all 50 states are participating in the 100th annual celebration, taking place between April 29 and May 5. This number is up from 700 last year, said Lennertz, and includes about 10 indie bookstores that have opened up since last year’s event. 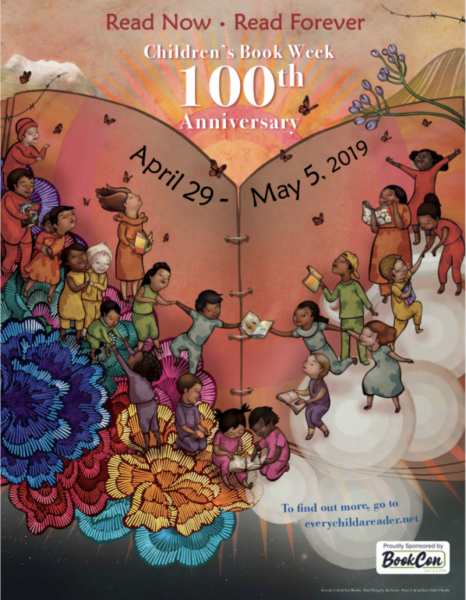 Locations and details for over 2,500 events being held during Children’s Book Week at independent bookstores, schools, and libraries will be listed on an online map on the Every Child a Reader website in early April. Event kits, activity pages in a dozen languages, a poetry bookmark, and more will be available in the CBW toolkit online.

CBC officials also unveiled this week the official 100th anniversary poster, illustrated by Yuyi Morales, based on the theme “Read Now, Read Forever,” which looks to the past, present, and future of the fun and enriching experience that is children’s and young adult books. Over 125,000 posters will be distributed at CBW’s participating schools, libraries, and bookstores. The poster art and downloadable resources are available now.

Additionally this week, CBC announced that Parents, the popular magazine for moms and dads, will be a media partner for the centennial celebration. CBW’s marketing partners include BookCon, First Book, Sesame Street, Screen Free Week, and other national organizations.

“We’ve been planning for the 100th anniversary for quite some time, and to see every segment of the children’s book world come together so enthusiastically is very rewarding,” said Shaina Birkhead, associate executive director of Every Child a Reader and the Children’s Book Council, “mostly because kids of all ages will have many fun materials and original visual resources to enjoy before, during, and long after this year’s Children’s Book Week.”

While the 2019 Children’s Book Week officially takes place between April 29 and May 5, the centennial celebration will feature literary events all year round. Key components will include author videos for the classroom, book award voting, a commemorative book publication, and a museum exhibit.

Beginning in late March, 100 videos of authors and illustrators talking about their favorite characters will be sponsored and produced KidLit TV, and from March 1 through June 2, children and teens can vote online for the 12th annual Children’s & Teen Choice Book Awards.

In addition, on March 5, Random House is publishing 100 Years of Children’s Book Week Posters, edited by Leonard Marcus, which features work from early luminaries such as N.C. Wyeth and Marcia Brown to contemporary illustrators such as David Wiesner, Mary GrandPré, Christian Robinson, and Jillian Tamaki.

Also this year, 19 illustrators will be producing collaborative yearlong anniversary poster panels, to be released a month at a time, and six original bookmarks. In the fall, Kansas City museum The Rabbit Hole will open an exhibit featuring a three-dimensional portal through which kids and teens can experience the history of Children’s Book Week and classic children’s books.

For more information about the centennial Children’s Book Week, booksellers can visit the Every Child a Reader website.