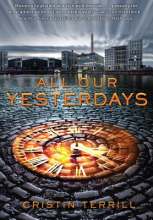 Cristin Terrill is the author of the debut young adult novel All Our Yesterdays (Disney-Hyperion). She graduated from Vassar College with a degree in drama and pursued a master’s degree in Shakespeare studies from the Shakespeare Institute in Stratford-upon-Avon, England. Terrill has worked as a theatrical stage manager in London and in various locations across the U.S. She currently leads creative writing workshops for kids and teens in the Washington, D.C., area.

What inspired you to create All Our Yesterdays’ unique plot line?

Cristin Terrill: The initial inspiration for the plot of All Our Yesterdays came to me one night when I couldn’t sleep. I got up at about 3:00 a.m. and turned on the television, and The Terminator was playing on cable. As I was watching, I started wondering how the story would be different if the killer robot from the future was actually the good guy instead of the villain — if the world really would be better off if John Connor never lived. Then, because I write for young adults, I started wondering what it would be like if he was a teenage girl instead of a killer robot. That’s how I first got the idea for Em and her mission!

What advice would you give a young adult interested in writing?

CT: Read a lot, try to write a little bit every day, and don’t let perfectionism stop you. Sucking is a necessary and important first step to all good writing.

What is your earliest memory related to reading?

CT: I still remember the first real book I was able to read on my own. It was impressively thick (mostly because there was only one sentence per page), and I was so proud of myself that I took it to school with me and read it multiple times a day. It was like discovering I had a magical power.

Why do you think young adult fiction is so important?

CT: I think it’s important for everyone to be able to see themselves and their experiences reflected back at them through art and entertainment, and that probably goes double for teenagers. It’s hugely reassuring to discover a character who has the same thoughts or feelings that you thought only you did and to realize you’re not as weird or alone as you thought.

You just started your tour for All Our Yesterdays. So far, what is your favorite part about touring?

CT: The best part has definitely been all the fantastic readers, booksellers, and educators that I’ve met along the way!

If you were a bookseller, is there a title that you would say YA readers just have to read?

CT: I don’t think I could pick just one! Especially because there’s so much breadth and diversity in young adult literature, and what one person needs to read isn’t the same as what the next needs. But some of the books I find myself most often forcing into people’s hands are The Book Thief, The Knife of Never Letting Go, The Disreputable History of Frankie Landau-Banks, Before I Fall, and The Raven Boys.

Your book deals with time travel, so we had to ask: If you could travel to any point in time, when and where would you want to visit?

CT: This is a tough one, because there’s so much I’d like to see. But as an avowed Shakespeare nerd (as you may be able to tell from the title and main character of my book, if you’re as nerdy as me), I think I would have to go to 1602 London to see the original productions of Hamlet and Twelfth Night.

ABA member stores are invited to use this interview or any others in our series of Q&As With Indies Introduce Debut Authors in newsletters and social media and in online and in-store promotions (and please let us know if you do).