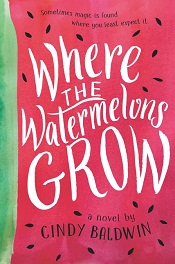 Cindy Baldwin is the author of Where the Watermelons Grow (HarperCollins), a Summer/Fall 2018 Indies Introduce middle-grade selection and a Summer 2018 Kids’ Indie Next List pick. In Baldwin’s debut, 12-year-old Della struggles with a baby sister who needs to be kept out of trouble, a mother with schizophrenia, and the drought affecting her father’s watermelon farm.

Baldwin grew up in Durham, North Carolina, where she regularly stashed books around her house in case she ever found herself without reading material. She now lives in Portland, Oregon, with her husband and daughter.

Buffy Cummins from Second Star to the Right Children’s Books in Denver, Colorado, was a member of the panel that selected Baldwin’s debut for the Indies Introduce program. Here, Cummins and Baldwin discuss the author’s inspiration for the book and the importance of writing about difficult topics for younger readers.

Buffy Cummins: Where the Watermelons Grow is a book firmly rooted in place, so much so that I found myself trying to look up Hummingbird Bay on Google Maps! I know you, like Della, grew up in North Carolina. What do those roots mean to you? 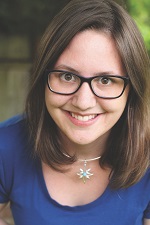 Cindy Baldwin: Yes! I grew up in Durham, a few hours southwest of Bertie County, where the fictional town of Maryville is located. Even though I haven’t lived there for a decade now, North Carolina is still a huge part of who I am. Especially now that I’m a parent, I’ve noticed how much a lot of those classic Southernisms still come out in me — like emphasizing the importance of politeness to my five-year-old or teaching her to call adults “Miss Firstname” and “Mr. Firstname,” just like Della does! My great-grandparents were small-town South Carolina farmers, and I’ve always felt somehow like the South, and North Carolina specifically, were in my blood and bones. Many of my stories are set in North Carolina because it’s still such a part of who I am and feels like the most natural location to explore through writing.

BC: What prompted you to write a children’s book where the main character’s mother has schizophrenia? (I’ll add that many of the Indies Introduce committee members appreciated that the illness was named, rather than staying a vague shadow in the background.)

CB: I don’t have schizophrenia, but like Della’s mama, I am a disabled parent. In Where the Watermelons Grow, I really wanted to explore the idea that disability doesn’t have to be removed for characters to achieve happiness — which is a trope that pops up a lot in books with disabled characters. So often, the disability itself is the great barrier to a happy ending, and that ending can’t be achieved unless there’s a magical cure involved. When I was growing up — and even still, as a disabled adult — I found these narratives so frustrating, because my health conditions are not ones that will ever go away; it was very invalidating to be shown again and again that I couldn’t have a rich, happy life while being disabled. In Watermelons, I wanted to write a book that was anti-magical-cure, showing that it’s possible to have a loving, happy, wonderful life, even if your challenges look significantly different from those of your friends.

I have cystic fibrosis — a life-shortening genetic disease — as well as fibromyalgia and Ehlers-Danlos syndrome, and my illnesses have a really profound impact on the shape of my husband’s and daughter’s lives, as well as my own. Because that’s our reality, it felt natural to write about a family, like ours, that is also greatly impacted by disability. When I was working on proofreading the manuscript, the last step before publication, I actually read it out loud to my five-year-old daughter, and it was a really neat experience to see her reactions as she listened to this story about a family whose lives weren’t all that different from ours. She picked up on a lot of the parallels as we read, and we had some really cool conversations.

BC: When her mother starts to seem sicker, Della feels responsible for fixing the situation. This is not uncommon in families where there is illness, physical or mental. What advice would you give Della if you could sit down with her over a plate of watermelon?

CB: Oh, man. I wish I could just give her a hug! I think that kids in those middle grade years feel such responsibility for everything around them — they haven’t yet grown up enough to realize how much is out of their control. Della is definitely caught in this trap. If I could, I’d try to share with her the realization she finally comes to at the end of the book: that her life, and her family, can be happy and full of love, even if her mama’s illness never changes or goes away. When I was 11, 12, and 13, I was going through some really difficult stuff — learning for the first time about a lot of the most serious ramifications of my cystic fibrosis. I felt very alone and isolated, which is exactly how Della feels through much of the book, like nobody can relate to what she’s going through. My advice to her, and to any preteens dealing with tough stuff that feels very lonely, would be that you can still find joy in life even if your life does look quite different from those of your peers.

BC: Like Della and her friend Arden, I loved the chalk-drawing scene in Mary Poppins. And I enjoyed seeing Della discover Emily Dickinson in the little library. What books or movies have influenced you, either in general or specifically, in writing Where the Watermelons Grow?

CB: There’s a passage where Della is talking about the chalk drawings, when she says that she takes pictures of her favorite murals and hangs them up on the walls in her bedroom, and that when things get hard with her mama she sometimes wishes she could step right into one of those photos. I had some very similar coping strategies when I was a preteen. I cut my teeth reading high fantasy classics like Lloyd Alexander’s Prydain chronicles and Robin McKinley’s The Hero and the Crown, and when I would get overwhelmed by things outside of my control, I’d spend a lot of time pretending I was a besieged princess bravely fighting against overwhelming odds.

In writing the book, I was heavily influenced by writers like Lois Lowry, Sharon Creech, and Kate DiCamillo. I have always been really fascinated with middle grade stories that can take an extremely difficult topic and address it in gentle, life-affirming, hope-filled ways, and those were the influences that I thought about a lot as I was writing the book! I think so many kids deal with circumstances that are much harder than we adults often like to think, and they have a deep need for books that can see that darkness, speak to it, and still offer the promise of a better future.

BC: Honey plays a significant role in Della’s story. Did you find yourself eating more honey than usual during the writing process?

CB: We go through so much honey at my house! I am glucose intolerant and sugary foods don’t usually sit well with my body, and so quite a while ago I switched to using a lot of natural sweeteners, like honey and real maple syrup, instead. We especially use a lot of local honey, since my husband and daughter and I all have killer seasonal allergies and that can definitely take the edge off. I’m totally in love with the local honey that’s produced in my area of Oregon — I don’t know exactly what it is that grows here, but all the honey I’ve had that’s produced within about 20 minutes of me has this magical tanginess that I have never quite been able to put into words. It’s really special, and it’s totally what I based the flavor of Della’s magical honey on!

BC: I didn’t realize how much Where the Watermelons Grow had affected me until several weeks after, when the ending was still echoing in my head. I love the idea of a circle of mamas holding Della up, and I wish that for my own daughter — heck, for all of us! Have there been times in your life that you’ve been buoyed by the women in your community, or did the lack of that circle of women inspire you to create one for Della?

CB: I have been really blessed with fantastic female mentors and role models in my life, which was definitely a huge impetus behind that theme in the story. And, not unlike Della, many of those women have come from my church community over the years. When I was a preteen, this sweet middle-aged lady in my congregation let me send her all the random stories I wrote and was the best cheerleader; she really made me feel like I had the potential to be a real author. I also have a very dear family friend who I’ve known since upper elementary school, who has always opened her home to me and gave me some really amazing opportunities to learn music education, another of my passions, through middle school and high school. I’ve been lucky, too, that my daughter has some amazing mother figures who help pick up the slack when I’m sick — none more incredible than my own mom, who lives about 10 minutes away and frequently swoops in to take my daughter for a few hours when I’m having a hard day. (They go to Costco together, which my five-year-old thinks is THE coolest grandma thing ever.) I think kids — and adults, too! — benefit so much from having a network of strong women in their lives. Even when our mamas are present and healthy, there’s so much richness and love to be found in that kind of community.

BC: Who do you hope reads Where the Watermelons Grow?

Find out more about the author at cindybaldwinbooks.com.