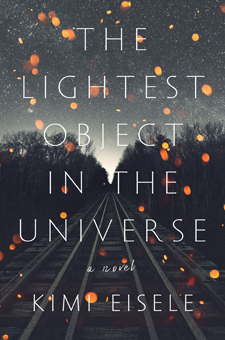 Kimi Eisele is the author of The Lightest Object in the Universe (Algonquin Books), a Summer/Fall 2019 Indies Introduce adult debut and a July 2019 Indie Next List pick.

The Lightest Object in the Universe imagines what happens after the global economy collapses and the electrical grid goes down. In this new world, Carson, on the East Coast, is desperate to find Beatrix, a woman on the West Coast who holds his heart. Working his way along a cross-country railroad line, he encounters lost souls, clever opportunists, and those who believe they’ll be saved by an evangelical preacher in the middle of the country. While Carson travels west, Beatrix and her neighbors begin to construct the kind of cooperative community that suggests the end could be, in fact, a bright beginning.

Booksellers who served on the Indies Introduce panel that selected Eisele’s post-apocalyptic debut for the program called her novel “hopeful,” “heartbreaking,” and “a story that will stick with you.”

Eisele is a multi-disciplinary artist based in Tucson, Arizona, and has been an artist-in-residence at various programs throughout the country. Her writings about globalization, the environment, and the arts have been published in a variety of literary magazines and news outlets. Eisele holds a master’s degree in geography from the University of Arizona, and has taught creative writing and dance for over a decade.

Kat Baird of The Book Bin in Corvallis, Oregon, was among the booksellers who chose Eisele’s book for Indies Introduce. Here, Baird and Eisele discuss the message of hope in the author’s debut.

Kat Baird: Many post-apocalyptic novels intend to convey a warning. I’m not sure that’s true about The Lightest Object in the Universe. What thought or emotion about the future would you like readers to walk away with? 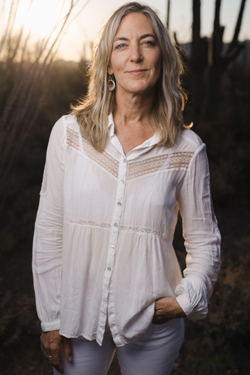 Kimi Eisele: Much of my life centers around community. I seem to get more introverted with age, but at heart, I love being around people and creating with others. Give me a campfire and I’ll be prodding the guitar player or egging others on for a round of improvisational games. I think the first thing I’d reach for if/when the end times come is another person, or several. In the book, I wanted to convey the sense of trust and support that we know is possible in the wake of a disaster or, in this case, a major unraveling. I wanted to offer a sense of possibility. The idea that what we might create, once everything gets destroyed, could be beautiful and collaborative. I’m a firm believer that artists create maps of the future. We have so many dark dystopian works about the post-apocalypse. If we are headed towards one — and it sure feels like we are — then I wanted to offer a blueprint for how we might operate with compassion and cooperation. A world where people aren’t always cruel and selfish, but benevolent and generous, a world where story and song could help us avoid false prophets and find deeper truths.

KB: The Lightest Object in the Universe exists between genres. What would you say are the books in its literary family tree?

KE: I always fear questions like this because some of the more obvious branches on that tree are probably science fiction and fantasy genres, and historically I have been a terrible reader of science fiction and fantasy. I’m working to change that! I read some post-apocalyptic fiction, but then stopped, because I didn’t want to be influenced. On the literary dystopian/utopian branch, I’d say Oryx and Crake (and many other Atwood works), The Parable of the Sower, Station Eleven, and Gold Fame Citrus. On the epic romance branch, we could find Cold Mountain and The English Patient. On the history and migration branch, maybe Steinbeck’s The Grapes of Wrath and John Muir’s A Thousand Mile Walk to the Gulf. I bet some bildungsromans and heroes’ quests might grow there, too, like Hermann Hesse’s Siddhartha.

KB: Beatrix is often surprised that she has provided her neighbors something they find worth trading for. What do you consider to be her post-apocalyptic marketable skill?

KE: She’s a community organizer. She learns to transfer her skills and experience organizing cocoa farmers in Ecuador to organizing her neighbors. She’s wildly optimistic. She really believes change is possible. And she’s got the chops for bringing people together and coming up with solutions. She earns social capital quickly, tapping the right people to help her do what she believes is right and good and necessary. She’s got strong opinions, but she really does listen to others.

KB: A radio station plays a key role in The Lightest Object in the Universe. Do you think there is something unique about the radio medium?

KE: My dad read aloud to me a lot when I was a kid. I listened to him narrate the entire Chronicles of Narnia before bedtime. I love reading, but I’ve realized that I’m very much an audial learner. (Hallelujah for podcasts!) When writing the novel, I was inspired by how radio has been used throughout history. FDR’s fireside chats, for example. I love the idea of a president addressing the nation over radio instead of over Twitter. Radio is also much more communal than television, because you are not fixated on moving images but can pay attention to those around you. I was also inspired by 1940s radio dramas — those melodramatic tales told by narrators speaking with the Transatlantic accent. I’m always trying to perfect that accent! In the developing world, radionovelas reach remote places and incorporate educational messages about birth control or safe sex or stopping domestic violence. It’s a very powerful form of public service announcement, with characters and plot and narrative arc and sound effects. It’s theatre, really, but with the potential to reach such a big audience. Another thing I love about radio is that it can happen in low-power situations. There’s something democratizing about that. Ham and underground radio also fascinate me. They’re very counter-cultural forms: people can subvert dominant narratives by broadcasting messages or stories from their living room or garage and still reach hundreds of people. That is potentially a beautiful thing. And, again, it’s about listening.

KB: The Lightest Object in the Universe swarms with lively, unique characters, many of whom are simply passing through. Who stands out to you?

KE: Flash and Dragon, the superheroes of the People’s Bicycle Brigade, are pretty special. Their dedication to doing good deeds and spreading information via the bicycle is revolutionary. And in real life, I do prefer bikes to cars. So they are kind of spokespeople (no pun intended) for how we might transform our streets, especially in the sprawling neighborhoods of the West. But also, one of my favorite characters in the book is Ayo, Carson’s former doorman, now a street broker. A Nigerian immigrant, Ayo is strong, funny, and highly adaptable. In earlier drafts of the novel, I returned to him often, following the trajectory of his story in the city, even after Carson leaves it. He is instrumental to Carson’s survival, of course, but to me, his presence in the novel is critical for another reason. He is the embodiment of resilience. If and when everything unravels, what will we do? Well, we’ll do what immigrants to America have always done. We will do what it takes. We will be resourceful. We will reinvent ourselves. We will adapt.

Find out more about the author at kimieisele.com.