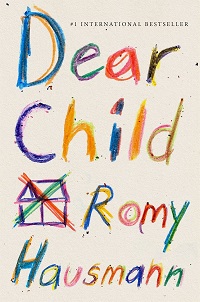 Romy Hausmann is the author of Dear Child, a Summer/Fall 2020 Indies Introduce adult debut and an October 2020 Indie Next List pick. Dear Child tells the story of Lena, a college girl who disappears without a trace, and her family that spends 14 years hoping to find out what happened to her. At the same time, deep in the woods, siblings Hannah and Jonathan live with their mother, Lena, and their father.

“On the night of an accident, Hannah and Lena are taken to the hospital in an ambulance, and their world explodes,” says Deon Stonehouse of Sunriver Books & Music in Sunriver, Oregon, who served on the bookseller panel that selected this debut for the Indies Introduce program. “Dear Child is told through the perspective of three bold characters: Hannah, a bright child of 13 who is wiser and perhaps cleverer than her experiences would indicate; Matthias, a man driven to uncover the fate of his missing daughter; and Lena, a woman held against her will and now struggling with the aftermath. This is a story rife with twists and turns. It will keep you guessing!”

Hausmann is a German filmmaker and television freelancer. She lives with her family in a remote house in the woods near Stuttgart, Germany. Booksellers can watch and share a video of Hausmann introducing her book; find this and other author videos in ABA’s Marketing Assets.

Here, Stonehouse and Hausmann discuss the compelling characters and twisty plot of the author’s English-language debut.

Deon Stonehouse: I found myself fascinated by Hannah, a young girl who had such a confined childhood but was still living a big life, keeping big secrets, and navigating a pretty complex situation. What did you see in Hannah? How much of her oddities stem from being held in confinement, and how much might be more indicative of something like autism? 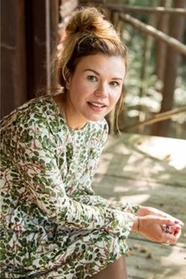 Romy Hausmann: To be honest, I made a conscious decision not to particularly establish how much of Hannah’s oddities stem from the fact that she lived her life cut off from the real world in a forest hut and how much of them might indicate autism. I wanted to leave it open whether she actually has autism or whether it is just a first guess from the doctors who are trying to test her for it. Why I did it this way has to do with the fact that I did not want to presume a diagnosis — although I am very interested in psychology and have talked to experts for research purposes, I am not a psychologist myself and I didn’t want to be presumptuous. Secondly, I didn’t think it was so important to make it very clear whether Hannah had autism or not. For me, she’s some kind of a little being who’s in contact with the real world for the first time, which perhaps makes her the most exciting character in Dear Child. Her understanding of the world is based entirely on her parents’ stories and what she has learned through books. Then there is her blooming imagination, which tries to fill the remaining gaps. It’s important to understand that Hannah’s entire image of the world was shaken with the escape from the hut and that she now has to completely reorganize and orientate herself. This is not only difficult for a child, but generally for anyone, because we are usually very attached to what we know as our very own normality and we are willing to defend it down to the blood because it defines us and gives us security.

DS: There are lots of big themes in this story: gender issues, the loss of a child, trauma, and the ways confinement affects children. It must have been a challenge to develop these threads while also keeping track of the pacing, twists, and turns of a compelling thriller. How did you keep this all straight? It fits together perfectly!

RH: Even if no one believes me: I don’t plot (or at least only rarely, when I’m completely stuck). I just set up the initial premise and try to create the characters as defined as possible. Then I start to write asking myself again and again how this character should behave next, what is realistic, and above all: How would I behave in this situation? I think many stories — especially in the thriller genre — suffer at some point from the fact that the author suddenly thinks they have to resort to shock effects or that their characters suddenly behave differently from their nature in order to advance the story. I make sure that my characters stay true to themselves and keep thinking back to their motivation: What are they about? What do you want to keep or bring back? What is it that drives them? I would rather risk that one or the other character will become unsympathetic in the course of the story than let them act out of character. As a result, my stories basically tell themselves. I then just make sure that the chapters remain of a certain length and that they contain a lot but are told in a few words. And after each chapter I write I ask myself: Would I want to read on now? If I have to admit to myself that I wouldn’t do that, I know the chapter isn’t good enough yet, so I completely rework it.

DS: The ending works — it surprises, and it fits the story. That is so important, even with great characters and an interesting premise; the ending is all-important. Did you have the ending set when you started writing? Or did the story build as you wrote?

RH: Although I let the story — and especially the characters — guide me, my feeling on how everything has to end establishes itself very early on. Sometimes I even have the vague thought of the ending before I know how to start the story. Without giving too much away, I knew from the start I was going to write this particular epilogue because the person from whose point of view it is written shouldn’t just remain a victim. I would have found that unfair.

DS: With a mystery that works so well in building tension and keeping the reader guessing, I felt that you must also enjoy reading mysteries. What authors or books have been an influence on your decision to write?

RH: For me, thrillers used to be either the shallow crime novels my mother used to read on vacation or blood and slaughter, so the genre was completely uninteresting to me. Then, by chance, I read Gone Girl and The Girl on Train and was absolutely thrilled. I wanted to write something like that, too. So a big thank you to Gillian Flynn and Paula Hawkins, without whom I would never have started writing thrillers. I still read everything I can get my hands on from both authors, but now I’m also very much inspired by true crime cases. I watch a lot of documentaries on television and am particularly interested in unsolved crimes.

DS: What’s next for you? Are you working on another book?

RH: My second book was published in Germany at the end of spring, so I’m currently working on the third. Actually, I wanted to take my time for this one, but I really love the story and have already come a long way. Apart from that, since the outbreak of the coronavirus, book events are finally happening again under the new regulations and on a smaller scale, which means I’m back on reading tours every now and then and incredibly happy about that. It’s wonderful to have the direct contact with my readers and always great fun.