“Free Speech” is a monthly column by Chris Finan, director of American Booksellers for Free Expression (ABFE), that shares his personal thoughts and opinions on a broad range of free expression issues; the views expressed do not necessarily reflect those of the American Booksellers Association. Finan welcomes comments and suggestions at chris@bookweb.org. 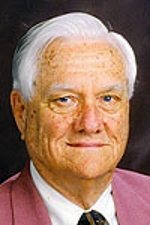 Rhett Jackson loved to tell people that Hugh Hefner had given him an award.

That was more than a little shocking to his neighbors in Columbia, the capital of South Carolina, where until recently the Confederate flag flew above the capitol dome.

It seemed so out of character for a tall, white-haired, Southern gentleman, a devout Methodist with a courtly drawl and a warm smile. His name was Rhett! What could he possibly have in common with a Yankee pornographer?

But Rhett thrived on confounding people’s expectations. During his long life, which ended on May 26 at age 91, he had always done things that seemed right to him no matter how they contradicted the ideas of others. It is no accident that he became a bookseller, a president of the American Booksellers Association, and a recipient of both the ABA Lifetime Achievement Award and the Hugh M. Hefner First Amendment Lifetime Achievement Award.

Rhett started asking questions early in life. He was born in the small town of Florence, South Carolina, a hotbed of Ku Klux Klan activity. When he was still a young boy, Jackson asked his mother why the family didn’t attend the church that was closest to them.

But social pressure did not stifle the consciences of Rhett and his twin brother, Larry. As 14-year-olds, they heard people condemning the effort to unite the Northern and Southern divisions of the Methodist Church because it might lead to integration. The merger finally occurred when Northern Methodists agreed to allow the segregation of the Southern congregations to continue.

Rhett and Larry were present when a leading layman gave the congregation the news. “Friends, I’m happy to report that Negroes will not be sitting next to our wives and daughters,” he said. His statement bothered them. “My brother and I wondered if this layman had ever heard the story of the great commandments,” Rhett recalled.

After serving in the Navy, Rhett married his wife, Betty, who survives him. He entered the furniture business and soon opened his own store. But Rhett was increasingly unhappy with the Methodist Church for failing to fight segregation. The Civil Rights Movement soon appeared at his doorstep. The first sit-in demonstration occurred in Greensboro, North Carolina, in 1960. Within a few months, similar protests were taking place in Columbia, where Rhett and Betty then lived.

It was in this increasingly charged atmosphere that Rhett made his first major address on social issues, at the 1963 annual conference of the South Carolina Methodist Church. He called on his fellow church members to perform “radical service” in the areas of “race relations, prisoner rehabilitation, alcoholic problems, economic injustices, drug addiction, and others.”

“It seems to me that we have a very reliable yardstick in the local church as to what constitutes radical, sacrificing service,” Rhett said. “If, when we start to do something, there arises a hue and cry — then, in all probability, this is the very thing we should do,” he said.

It was at this time that Rhett joined the campaign for prison reform. He became a member of a fledgling prisoner aid group, the Alston Wilkes Society, and served as its president from 1966 to 1970. By 1974, the group had grown to 6,000 members and was providing a wide range of services to men in prison, former convicts, and their families, including the operation of three halfway houses.

The governor of South Carolina appointed Rhett to the state parole board in 1975. Despite the heavy workload involved in reviewing more than 100 cases each month, he served on the board for over a decade and was elected chairman in 1988. Throughout his service, he was a strong advocate for rehabilitation and opposed the nationwide trend toward limiting parole.

Rhett’s greatest contribution may have been to racial justice. In 1963, he was one of a handful of whites who helped launch the first integrated social organization in Columbia, the Columbia Luncheon Club, which brought whites and blacks together to discuss ways of improving race relations.

In 1966, he was appointed the chair of a committee charged with developing a plan for merging the separate institutions that served the 200,000 white and 50,000 black Methodists in South Carolina. After five years of visiting every church in the state, the committee finally convinced white Methodists to vote to end segregation in the church.

In 1972, Rhett was the only white person on a six-member committee that traveled over 100,000 miles while visiting Methodist congregations throughout the South to monitor the progress of the merger approved by the national conference. Headed by the Rev. Joseph Lowery of the Southern Christian Leadership Council, the committee logged more than 100,000 miles over the next four years.

At times during his career as an activist, Rhett’s family was the target of hate mail and anonymous phone calls. He also received so many awards from African American organizations that he didn’t have a place to put them. “I wish they’d given him underwear,” Betty said one day. “He hasn’t room for any more plaques.”

During the years that Rhett was working for racial harmony, he was also operating a successful furniture business. In 1975, Rhett brought his business interests and his social commitment into closer alignment by selling his furniture stores and opening a bookstore, The Happy Bookseller. As a good businessman, Rhett knew that bookselling wasn’t going to make him rich. But while he had no intention of losing money, he was willing to take less to participate in a business that provided enlightenment to the community.

In the article “The Conflict Between Running a Good Book Store and Running a Good Business,” Rhett explained that “many of us are so dedicated to the free exchange of ideas, to the proposition that the printed word should be available to all, to the proposition that our citizens should have the right to read anything of their choice (even dangerous ideas), that we are determined to run a book store that represents that kind of commitment.”

Rhett noted on one occasion that he had been taught from school books that contained lies about the Civil War. One of the goals of the Happy Bookseller was to sell books that would be controversial because they revealed unpopular facts, he said.

Rhett was outspoken in his opposition to censorship. “The battle for freedom is never over,” he said in one of the many speeches and articles he wrote about the importance of protecting free speech. “There are always people out there who think they have the right to tell us what we can read.”

Rhett’s charm, passionate devotion to books, and strong defense of free speech made him instantly popular with booksellers in other parts of the country. In 1982, only seven years after he became a bookseller, he was elected to the Board of Directors of the American Booksellers Association. Four years later, he became ABA president.

The 1980s were a difficult time for the people who produced and sold books, magazines, and other media protected by the First Amendment. The election of Ronald Reagan had encouraged conservative groups and some feminists to attempt to suppress works with sexual content that they believed were demeaning to women.

The attack came to a climax in the report of the Attorney General’s Commission on Pornography, which gave a government seal of approval to the censorship crusade.

During Rhett’s presidency, ABA strongly defended the First Amendment rights of booksellers and their customers. In 1986, it joined Playboy and others in suing the Meese Commission over a letter that it had sent to a list of national magazine retailers threatening to identify them as distributors of “pornography.” The lawsuit forced the commission to withdraw its letter and its threat.

The next year, ABA took the highly unusual step of formally opposing a nominee to the U.S. Supreme Court, when it urged the rejection of Robert Bork because of his statements favoring new limitations on First Amendment rights.

Rhett and Betty sold their bookstore in 2003, but Rhett never retired from activism. He joined the campaign to force the South Carolina government to remove the Confederate flag from the pole above the State House. His first protest against the Confederate flag occurred in 1966, two years before the death of Martin Luther King.

In 2000, the issue gained new life as he and other organizers used the celebration of Martin Luther King Day to protest. After several years of protests, the Confederate flag was moved from the State House to a nearby monument honoring Confederate soldiers. Rhett wasn’t happy about that compromise. The flag was finally removed last year.

Rhett was still fighting for change in his 80s. He spoke at a demonstration in Columbia seeking an increase in state spending in poor, predominantly black school districts. “This march is only the beginning,” Rhett promised. “This coalition will stick together, joined at the hip, until our schools are properly funded. In the words of the old civil rights song, ‘We ain’t gonna let nobody turn us around!’”

Rhett believed there was always more to do, but his long life was full of victories for human freedom.

Learn more about Rhett Jackson through the comments offered this week by his colleagues and friends.