Have you bought your tickets to this year’s Silent Art Auction on May 30, 2018? 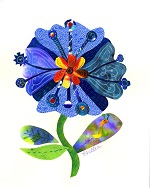 The event, which is a wonderful opportunity to collect art, will include a raffle as well as the chance to bid on individual pieces. Many of the donating artists will be at the auction, which is similar to a pop-up art exhibit featuring talented artists who create books for youth.

The auction runs from 5:00 p.m. to 7:30 p.m. in the South Concourse of the Jacob Javits Convention Center in New York City. Tickets are available on BookWeb. Tickets are $110 each; however, for ABC Children’s Group at ABA members, tickets are complimentary (contact ABC Group Manager Gen de Botton for the promo code), and tickets for regular ABA member booksellers are $11 (log in to BookWeb to see the adjusted price).

This event benefits two important organizations: the American Booksellers for Free Expression (ABFE) and Every Child a Reader. Both organizations exist to promote the freedom and joy of every child and teen to read any book they want, and to support booksellers, librarians, teachers, and parents in their daily work to do the same.

ABFE defends books that are censored by funding the Kids’ Right to Read Project (along with the help of the National Coalition Against Censorship) and Banned Books Week; Every Child a Reader promotes reading via national programs such as Children’s Book Week, Children’s & Teen Choice Book Awards, and the National Ambassador for Young People’s Literature (with the Library of Congress).

Every year, the auction celebrates the history of children’s illustration by featuring an important legacy. This year, we honor the great Ashley Bryan.

Bryan is a living wonder of the world who has received many accolades, including a Coretta Scott King-Virginia Hamilton Lifetime Achievement Award, a Caldecott Honor, a Newbery Honor, and a Golden Kite Award for Nonfiction. He is an iconic storyteller and an incredible artist in two-dimensional and three-dimensional forms whose work has influenced and inspired generations of children’s book artists. Tony DiTerlizzi, Laurie Keller, Daria Peoples-Riley, and Gareth Hinds are a few of the artists that donated work to honor Ashley Bryan.

Preceding the auction is the announcement of the 11th Annual Children’s & Teen Choice Book Awards winners, the only book awards chosen by kids and teens. The announcements will be made by this year’s honorary chairs, Selina Alko and Sean Qualls.

More information about ABA’s programming at BookExpo can be found on BookWeb.org. Booksellers can register for free badges to BookExpo 2018 by providing an ABA member ID number during the registration process. Booksellers who don’t know their ABA member ID number should send a request with their name, title, and store name to info@bookweb.org or call (800) 637-0037, ext. 7536.