Calligraphy art and gift store By Hand, Ink in Hilton Head, South Carolina, recently expanded its book offerings from just three shelves to much more when the store moved to a larger space within its current shopping center location. 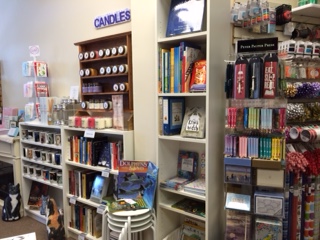 Owner Bobbi Hahn ran a calligraphy design studio on the upper level of the Shops at Sea Pines Center, but she had always wanted to open a bookstore, so in January 2015, she joined the American Booksellers Association as a prospective bookstore owner.

“At the time, I thought that if I did not do it now, I was never going to do it,” said Hahn, who has been doing calligraphy work over the last few decades and specializes in addressing wedding invitations, designing posters, and creating greeting cards for special occasions.

“Over the course of the last several years, I had three or four opportunities to open the store, but always, for one reason or another, it never worked out. I did all the homework that you were supposed to do; I got the Paz & Associates handbook, which I refer to as my bible; I went over the financials,” she said, but it just never felt like the right time.

In June 2015, Hahn, who had been selling her calligraphy at the local farmers’ market every Tuesday, had a stroke of luck: a 192-square-foot retail space became available on the ground floor of the Sea Pines shopping center.

That November, Hahn opened the doors to her new space, taking advantage of the extra square footage to display and sell her own work — mostly handmade greeting cards and framed poems and quotations — as well as calligraphy work and cards by other designers. To that, she added other retail items: beautiful and unusual paper accessories, gift items such as candles, writing paraphernalia, and a couple hundred books spread over three shelves. 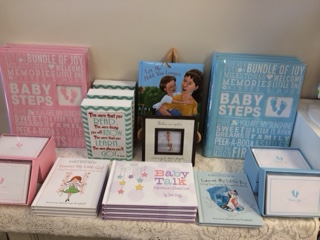 By Hand, Ink relocated to a new, 502-square-foot space next door in May 2016. “It’s really nice because the space has got a nice flow to it and there’s one long wall, which I tell people was screaming for bookshelves,” Hahn said. The new space, which reopened on May 23, has a much better layout, she said, with lots more room for books and an entirely separate area for her studio.

The store now features five full-sized bookshelves and two half-sized bookshelves, and Hahn said she would like to bring in even more books to further transform the shop. Earlier this month, in a message to subscribers of her store newsletter, Hahn offered the chance to win a basket full of books to those responding to a survey about their reading preferences.

Hahn said her goal is to make her store a destination for people seeking good reads, whether it’s fiction, nonfiction, books by Southern writers, books about South Carolina or Civil War history, or books about the area (Hilton Head is a resort town on an island located in South Carolina’s Lowcountry region). Her book collection also focuses on new releases, mostly by female authors, as well as books written by local authors.

As she has tried to make a real go at her longtime dream of opening a bookstore, Hahn said she has been inspired by a quote from The Guernsey Literary and Potato Peel Pie Society by Mary Ann Shaffer (Dial Press): “No one in their right mind would take up clerking in a bookstore for the salary, and no one in his right mind would want to run one — the margin of profit is too small. So, it has to be a love of readers and reading that makes them do it, along with first dibs on the new books.” 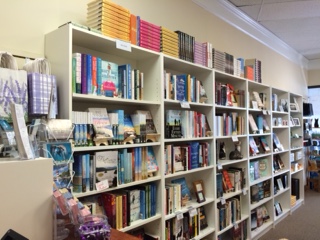 “I have a friend who said I came to the bookstore business through the back door,” said Hahn, who found out she had a talent for hand-selling early on, when the art gallery she had managed for several years began selling books as well. “Usually it’s bookstores that then go on to expand into sidelines, and I’m doing the reverse.”

Going forward, Hahn said she would like to host an author event or two, like a luncheon featuring local and regional authors. Hilton Head Island has a vibrant literary community, including The University of South Carolina at Beaufort’s authors luncheon series featuring eight — often big-name — authors per season, she said.

“Whenever I do decide to do something like an author event, we have wonderful access to authors in this area, even though we are a relatively small demographic,” Hahn said.