A Wild and IndieBound Independence Day at Titcomb's

When Vicky Uminowicz of Titcomb's Bookshop in East Sandwich, Massachusetts, received her store's IndieBound "Eat Sleep Read" poster, she immediately knew it would be too big for the store's multi-paned colonial windows. However, Uminowicz did have the perfect place for the big red poster: on the back of the bookstore's red, white, and blue Fourth of July parade float. 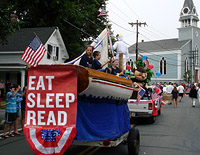 "The Liberation Box just came at the opportune moment," Uminowicz told BTW. "We had just received the 'Eat Sleep Read' poster ... and it fit beautifully and quite prominently at the back of the boat for all to see. After all, it was an Independence Day celebration!"

Every Fourth of July, East Sandwich puts on a parade featuring floats created by local businesses and community organizations as well as "lots of kids on bikes and in strollers," Uminowicz explained. This was the fourth year that Titcomb's participated in the parade, which, she added, "is getting bigger every year." 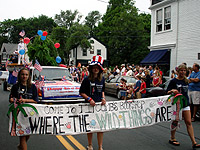 For each parade, Titcomb's has chosen a theme based on a children's book, and the store rents a costume for a volunteer to where in the parade. Last year, the theme centered on Curious George. This year it was Maurice Sendak's Where the Wild Things Are, since Massachusetts' libraries are celebrating "Wild Reads at the Library" this summer.

"We borrowed an antique Herreshoff wooden boat, where a costumed Max set sail for the land of the wild things," Uminowicz said. "My son and his cousins were all part of the float, and some of them squirted water at onlookers who squirted water back at them (a tradition)."

Uminowicz, who is very involved in a new Shop Local campaign in East Sandwich, also reported that she shared the IndieBound "Here's What You Just Did" poster with other local businesses, who were "very impressed," especially by the ability to customize the flier with a store name at the top. --David Grogan