ABA at BookExpo: “For Authors: Working With Independent Bookstores”

The American Booksellers Association’s BookExpo education session “For Authors: Working With Independent Bookstores” featured tips from booksellers who have formulated best practices to create events that benefit both the author and the bookstore. 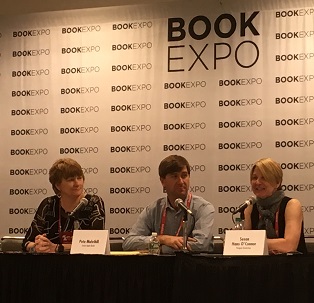 “We always tell authors when they come to our store that no matter how many people show up to your event, it’s worth your time because you build a relationship with the store, and, after you leave the store, everyone will remember you and we will hand-sell your book,” said Mulvihill.

O’Connor said that Penguin Bookshop has hosted major authors as well as those whose popularity publishers are trying to grow, but it is just as dedicated to hosting local authors. In fact, she said, events with self-published authors who have a very strong local connection have been some of Penguin’s most successful.

“We try to cater each event to that particular author as if it’s really, really, super-important because it is important, since we are a small store,” said O’Connor. “The bottom line for me is that it is about relationships and increasing your fan base. Even if only one or two people show up, it starts out person by person.”

It’s also important, said O’Connor, for stores to do events with local authors because bookstores have an important role in their communities.

“We do feel that our role in the community is to support our community, which means supporting local authors as well as bringing in different authors and voices,” O’Connor said. “We may not sell a lot of their books on a regular basis but if it’s an opportunity for someone to come in, and we feel that they can do excellent outreach and we can work out a successful partnership, we’re pretty much open to any kind of book within reason, as long as it has merit and is well-written.”

Every bookstore has their own preference as to how they would like authors to approach them to set up an event. Mulvihill said if an author is local, he would love to meet him or her in person, and he advised authors who visit their local bookstore to ask to meet with the events coordinator, or, if that person is absent or busy, to just get their contact information and send them an e-mail. For her part, Koehler said she prefers authors who want to read, do an event, or sell books at her store to reach out via e-mail.

“What I would like authors to do is, if they are going to approach us directly without some intermediary like a PR firm or a publicist at the big houses, to understand what we are all about, so my suggestion is to do some research first,” said Koehler.

O’Connor said that during the event itself, bookstores like authors to demonstrate a sense of appreciation for the store and for independent bookstores in general; to act happy when they walk in; and to be polite and kind to staff. Above all, she told authors, don’t mention Amazon.

“I can’t tell you how many times authors come in and talk about Amazon in our store,” said O’Connor. “There’s no denying that it’s part of our lives and it’s hard to just shut it out, but when you’re within the walls of your independent bookstore, which has worked very hard for you, we would really appreciate it if you would focus on the independent bookstore channel. We are fighting the good fight and as many of you who can join us as possible, we would really appreciate it.”

Mulvihill said that before an author appearance he likes to see authors do their part, along with the store, to help with publicity.

Booksellers always remember the promotional efforts that authors make, or don’t make, before and after the event, said Koehler, citing a woman who, after working with Blue Willow on a plan to send out postcard invitations to her family and friends, admitted she did not send them. On the opposite end of the spectrum, Mulvihill recalled how early on in David Sedaris’ career, the author sent flowers to Green Apple after a reading at the store.

“You don’t have to go that far, but we often get just a little postcard or a thank you note in the mail, weeks later, even months later. If you’re on a big tour and you can’t deal with it then, just some little thank you, or even an e-mail, is fine,” he said. “It’s manners: just say please and thank you. It really makes a difference. We get a lot of junk mail; we don’t get a lot of good, happy mail.”

If there’s no event planned or no prior arrangement with the store, authors were advised by the panelists not to just come in off the street with a box of books. If an event is planned, however, authors are encouraged to bring along extra copies. Both O’Connor and Mulvihill said that if the event goes well, they will usually buy a few extra copies to sell, and the store takes a cut of the sales.

Since Green Apple can only hold about 150 people maximum, Mulvihill said that he reserves straightforward signing events for major authors. Otherwise he prefers a short reading plus a signing period, a conversation between authors, or a Q&A with the audience.

Koehler said that authors should work with a bookstore to create an event that works for their particular venue. “In every store it’s going to be a little bit different, but I think the key is to work with the store and ask, what would you like me to do?” she said. “We’ve hosted many authors and before they start, we always ask, how is this going to go? What is this evening going to be like?”

An event at a bookstore is meant to be an experience, added Koehler, and the more engaging the event, the better the outcome for both author and bookseller.

Authors and booksellers can find tips for working on events that benefit them both in BookWeb.org’s Designs and Downloads section.