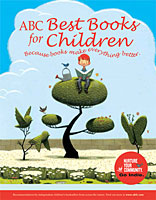 In a strategic move that will increase its 2009 catalog circulation by 75 percent, the Association of Booksellers for Children is distributing a quantity of its 2009 Best Books for Children catalog to all of the ABA member stores receiving the Winter Children's White Box mailing this month. This is in addition to the 260 ABC members that already receive the catalog.

"We had a number of goals in mind when we planned this year's catalog print run" said ABC Executive Director Kristen McLean. "First, we wanted to extend our expertise in children's bookselling to as many stores as possible this year, at a time when the children's section is out-performing most other segments of the book trade.... Secondly, we wanted to add value for our publishers by extending the reach of their marketing dollars at a time when every dollar counts. And third, we wanted to demonstrate the kind of thing we do to those ABA stores that may be unfamiliar with us."

The ABC catalog, now in its 17th year, includes bookseller-nominated titles, award-winners, notable backlist, critical favorites, and gems from small independent presses. This year's 20-page edition showcases 250 titles, of which 225 are frontlist. It also features a prominent "Buy Local" message in the form of the IndieBound slogan "Nurture Your Community. Go Indie." To extend the catalog's shelf life, there is no holiday branding.

"We hear over and over from booksellers and consumers that they love the catalog," said McLean. "Many of our stores order additional imprinted quantities that they use for newspaper inserts, book fairs, staff training, educator nights, and other promotions that help them drive sales. I think because the catalog is vetted, booksellers can really get behind it. Historically, we're pretty successful at including most of the books that win the major awards the following year. Independent booksellers have a good nose for books."

McLean hopes that ABC can continue to expand the growth of the catalog by allowing stores from the larger ABA membership to order imprinted quantities in future years. "I think there is tremendous potential to expand its reach and make it work as hard as possible for independent booksellers," said McLean. "We have a great working relationship with our publisher partners, and we've had many years to develop this independent editorial model that works."

The 2009 ABC Catalog is also available online, as is the catalog booklist for bookstores and a catalog FAQ.

ABA's Winter Children's White Box mailing will also feature a supply of Winter 2009 - 2010 Children's Indie Next List fliers. Watch for a preview of the list in next week's edition.