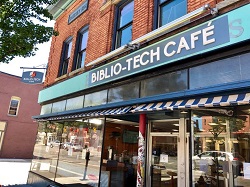 The Biblio-Tech Café has opened in Perry, New York. “Today was a dream come true,” said owner Giuseppe Gentile after the June 23 ribbon cutting. “The support and embrace from the community was overwhelming, and I was so happy to see so many smiling faces.”

Heidi and Michael Bender, owners of the brand new Split Rock Books in Cold Spring, New York, wrote a piece for LitHub on “The Big Highs and Deep Lows of Opening an Independent Bookstore.”

Emma Ramadan, co-owner of Riffraff bookstore and bar in Providence, Rhode Island, appeared on RI Small Biz Fuel to talk about new bookstore business models. “Bookstores are evolving — and to keep up with online, and Amazon, bookstores have to find a new way to evolve, and this trend of bookstore-bars has been cropping up the past few years,” she said.

John Evans, co-owner of DIESEL, A Bookstore, in Santa Monica and Larkspur, California, appeared on NPR’s All Things Considered to share his top summer book recommendations.

The Book Stall’s new comedy series, “The Book Stall After Dark,” is a hit among Winnetka, Illinois, residents.