Spark Books opened in the fall in Aspinwall, Pennsylvania. 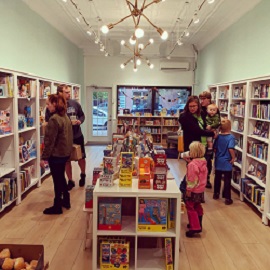 An inside look at Spark Books in Aspinwall, Pennsylvania.

In 2020, The King’s English Bookshop will open a new location in the rebuilt Salt Lake City International Airport.

Carmichael’s Bookstore owners Carol Besse and Michael Boggs passed the torch of their Louisville, Kentucky, store to their daughter, Miranda Blankenship, and their niece, ABA board member Kelly Estep.

McNally Jackson’s flagship Prince Street location in New York City will not be moving after all, despite previously announced plans to relocate due to a substantial rent increase.

Highland Books is on the move in Brevard, North Carolina.

Maryland voter information program Stand UpCounty and its supporters, including Novel Books, were recognized with the Outstanding Community Leader award last month by the Clarksburg Chamber of Commerce. “As a bookseller, I always view bookstores as a place of imagination, inspiration, and education. Books, and the stories they tell, open our minds to other viewpoints,” said bookstore owner Patrick Darby. “I wanted to stage forums for elections this year, and was thrilled to host Stand UpCounty at my store. The discussions were illuminating, some contentious, but very informative.”

Vox published an article on how “Instagram is helping save the indie bookstore,” which highlighted member stores Books Are Magic and the Last Bookstore.

City Lights Bookstore in San Francisco, California; Powell’s Books in Portland, Oregon; and Politics & Prose and Busboys and Poets in Washington, D.C., were featured in Reader’s Digest’s list of the 12 best cities in the world for book lovers.

[words] Bookstore in Maplewood, New Jersey, was featured in an article about last-minute holiday shopping by NJTV News.