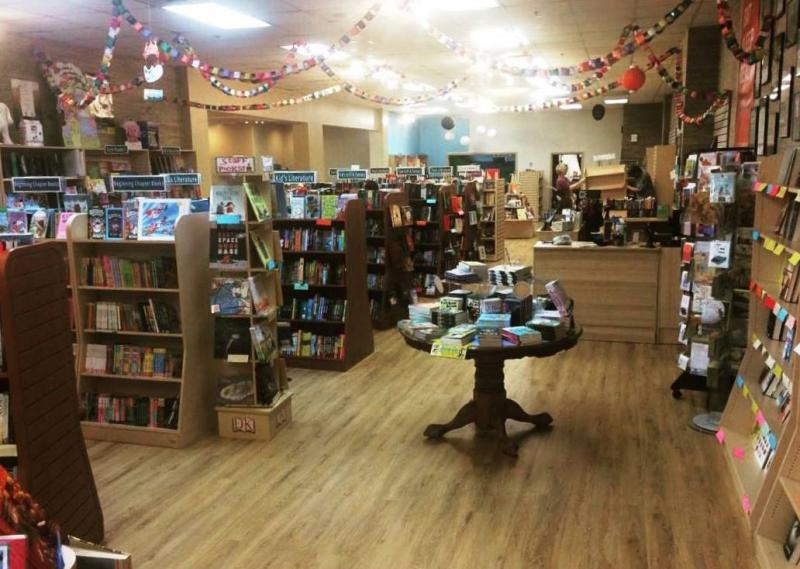 After closing its doors for five days in July to undergo an extensive remodel, Boise, Idaho’s Rediscovered Bookshop marked its grand reopening on September 5. The public was invited in to see the store’s newly expanded space and enjoy face painting, prizes, craft beer, and live music.

When a neighboring retailer moved earlier this year, Rediscovered Bookshop seized the opportunity to open its back wall and increase its footprint. Owners Bruce and Laura DeLaney also upgraded the store’s furniture, flooring, counters, and events space.

Following the party, the DeLaneys shared a special note of thanks on Facebook. “We often say that we have the best job in the world, and we thank you all. The last nine years have been a fantastic journey and we are looking forward to having many more years of connecting readers with books for them to love,” they wrote.

South Florida’s Books & Books currently boasts one of the most extensive selections of bilingual books in the area, reported the Miami Herald, an effort accelerated over the years by Gloria Noriega, the bookstore’s director of Spanish language inventory.

In addition to its robust Spanish language stock, Books & Books now hosts 15 events in Spanish each month, with many being held at the shop’s newest location, which opened at the Adrienne Arsht Center in Miami last fall.

In August, the bookstore launched a writing contest, Cuentomanía, which invites writers to read short narratives aloud in front of a panel of judges and audience members. Finalists will compete later this year for the top prize — publication by Suburbano Ediciones, a three-night stay in the Writer’s Room at the Betsy Hotel in Miami Beach, and a $200 Books & Books gift card.

“All of this is an experiment,” said Noriega. “In general, we’re having fun with it and in the end literature wins. We wanted it to be exciting and entertaining, something that would attract a varied public.”

This summer, The Morris Book Shop in Lexington, Kentucky, launched the Pen to Plate Dinner Series, which invites 16 diners into the bookstore for a multi-course meal curated by an area chef, based on his or her favorite cookbook.

Local retailers Mulberry and Lime, Thoroughbred Antique Gallery, House by JSD Design, and Street Scene are working with the bookstore for each meal to create artfully decorated tables.

The series was inspired when store staff began sharing memoires associated with the classic Moosewood Cookbook, the vegetarian recipe collection by Mollie Katzen first published in the 1970s. Local chef Dan Wu, who appeared on the competitive cooking show MasterChef in 2014, helped the bookstore recruit three fellow chefs to conduct the dinners.

On September 17, chef Allison Davis will prepare the meal for the third Pen to Plate dinner, using recipes from The Nourished Kitchen: Farm-to-Table Recipes for the Traditional Foods Lifestyle by Jennifer McGruther (Ten Speed Press).

Moscow, Idaho’s BookPeople of Moscow is conducting a series of fundraising campaigns to improve a variety of aspects of the store. The first campaign, which launched on September 8, aims to help the bookstore’s events programming through the purchase of a new sound system and chairs.

“BookPeople of Moscow wants to keep hosting lots of events, because the feedback from the wide range of people who attend is consistently enthusiastic and positive,” organizers wrote on the campaign’s website. “A better sound system and chairs will make it much easier for BookPeople staff to set up for events and for the attendees to enjoy them.”

Upcoming campaigns will raise funds to create a learning wall in the children’s area and to build a fireplace in the store’s back room.