Commonplace Reader, which will open in September, hosted a pop-up book sale on the porch of its future storefront.

Womrath Bookstore in Bronxville, New York, will be under the ownership of Morin and Barbara Bishop effective August 1.

Loyalty Bookstore in Washington, D.C., is planning to open a second location, in Silver Spring, Maryland, and has launched a crowdfunding campaign to help support the current and future stores.

Bartleby’s Books in Wilmington, Vermont, is marking 30 years in business this weekend. 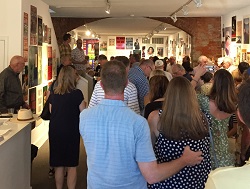 The "40 Years of Book Posters from Square Books" opening at Southside Gallery.

Pageturners Bookstore in Indianola, Iowa, is celebrating its fifth birthday on July 27.

Square Books in Oxford, Mississippi, worked together with Southside Gallery to create an installation called “40 Years of Book Posters from Square Books,” which featured more than 300 posters that once hung in the store to promote books and events from all genres.

The owners of Yankee Bookshop in Woodstock, Vermont, were featured in a Q&A on the town’s blog.

Riffraff in Providence, Rhode Island, was featured in an article called “Shine a Light: Tom Roberge and Emma Ramadan on Selling Uncommon Books.”

Sundog Books was featured in an article titled “One of Seaside’s oldest businesses.”

I Know You Like A Book, Lit. On Fire Used Books, and The Book Nook were featured in an article called “Bookstore in Peoria are not just about books.”

Hoodline named The Bookshop as one of the three best bookstores in Nashville, Tennessee.

Charis Books & More was featured in an article called “Feminist bookstore joins forces with Agnes Scott and moves to Decatur.”