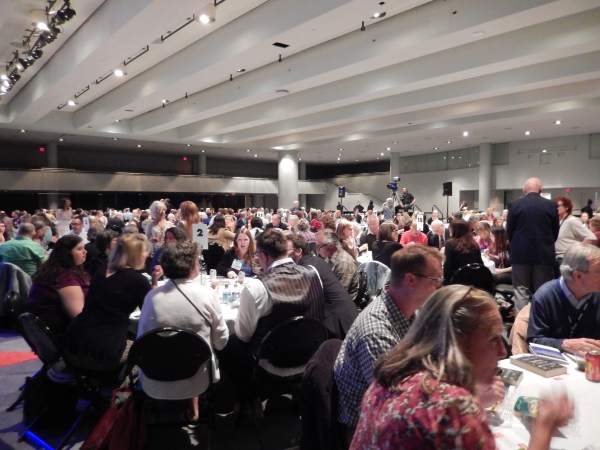 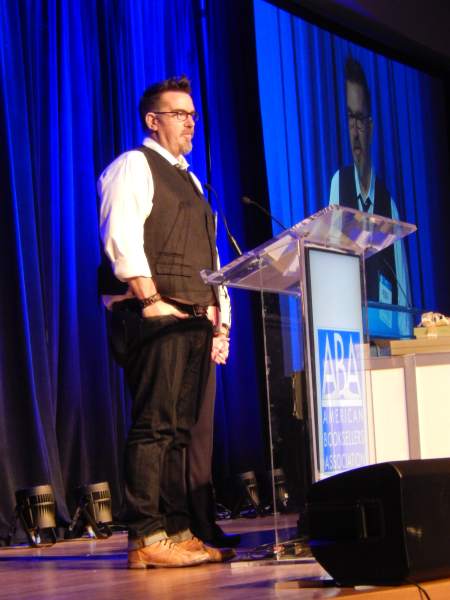 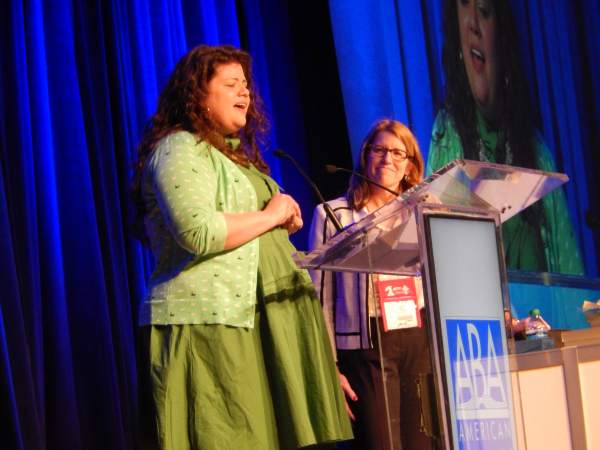 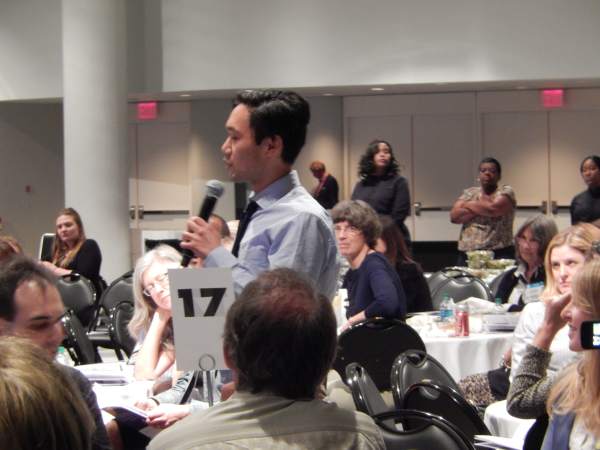 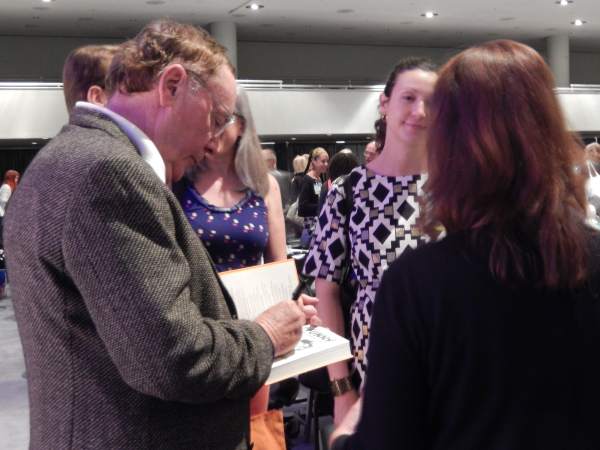 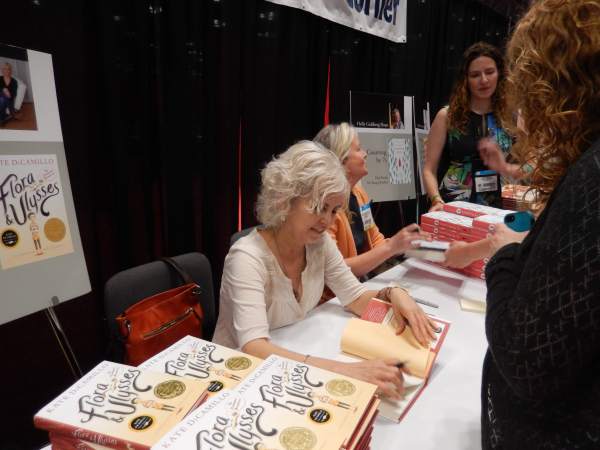 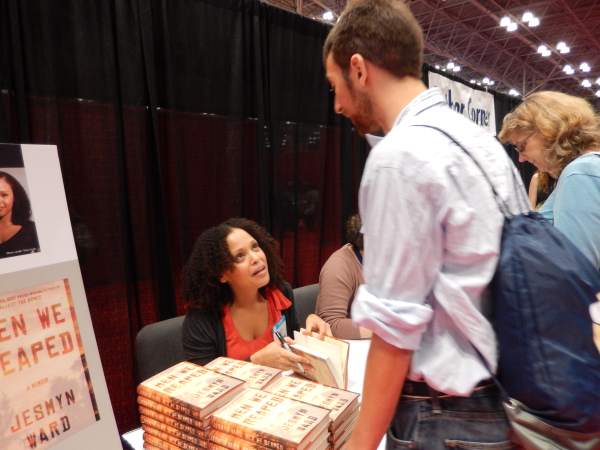 On Thursday, May 29, booksellers gathered at the American Booksellers Association’s 14th Annual Celebration of Bookselling and Author Awards Luncheon at BookExpo America to recognize the authors and illustrators that –– over the course of the past year –– have provided inspiration, empowerment, and ultimately, the tools to change a reader’s life. One of the more memorable acceptance speeches was made by Indie Champion Award winner James Patterson, who called on the major players in the industry, as well as the press and our government, to “step up and take responsibility for the future of our literature and the part it plays in our culture.”

ABA Board Member Sarah Bagby, who acted as emcee of the event, welcomed her fellow booksellers, extended thanks to ABA’s publisher partners, and applauded the authors and illustrators in attendance for sharing their gifts.

“Our enthusiasm and conviction as booksellers remain undiminished as we continue to work through challenging times,” said Bagby. “And our confidence as a bookselling community and our pride as independents have never been stronger.”

Bagby referenced a clear demonstration of this pride –– the growing success of the Indies First movement. Initiated by Sherman Alexie, in conjunction with last November’s Small Business Saturday, and celebrated again two weeks ago in the form of Indies First Storytime Day, led by Kate DiCamillo, Indies First has gained traction in hundreds of communities across the country.

“We salute Sherman and Kate and give thanks to all of the authors and illustrators who committed their time and talents to these important and very successful initiatives,” Bagby said.

The awards ceremony began with the E.B. White Read-Aloud Picture Book honor recipients. Author Adam Lehrhaupt (Warning: Do Not Open This Book! Simon & Schuster Books for Young Readers) told booksellers: “I certainly wouldn’t be standing here talking about my book if you didn’t do everything that you did.” And the book’s illustrator Matthew Forsythe added, “There’s no greater honor than going into a bookshop you love to nurture your love for reading and seeing your book in there –– face out.”

Drew Daywalt, who took home the E.B. White Read-Aloud Picture Book Award for The Day the Crayons Quit (Philomel), thanked his college professor and mentor Jack Gantos for getting him started in the world of children’s books, as well as booksellers for standing behind his book. “Without you literally handing the book to someone, saying, ‘This is a good book!’ guys like us would be starving, broke, and angry,” he said.

Holly Goldberg Sloan, an E.B. White Read-Aloud Middle Reader honor recipient for Counting by 7s (Dial Books for Young Readers), announced that she had just returned from a book tour, where she spread a message to the children she spoke to. “I tell them great communities have great bookstores, they have great libraries, they have great schools, they have great teachers, and they have people who support them,” she said. “Thank you for being a part of all that.”

Middle Reader honor recipient Richard Peck, author of The Mouse With the Question Mark Tail (Dial Books for Young Readers), said he was grateful for the recognition with E.B. White’s name attached. “No one but readers become writers,” he said, adding, “every journey begins in a bookstore.”

In accepting the E.B. White Read-Aloud Middle Reader Award for Flora and Ulysses: The Illuminated Adventures (Candlewick), Kate DiCamillo read from the introduction she wrote for Charlotte’s Web’s 60th anniversary edition. In the book, Charlotte’s promise to Wilbur that he will “live, secure and safe” is similar to E.B. White’s promise to his reader, said DiCamillo. “Things will continue,” she read. “Life will go on. It will be beautiful, astonishing, heartbreaking. And as long as you keep your eyes and heart open to the wonder of it, as long as you love, it will be okay.” Speaking directly to the booksellers in the audience, she added, “You guys are superheroes to me.”

Presentation of the 2014 Indies Choice Book Awards began in the Young Adult category with honor recipient Maggie Stiefvater, author of The Dream Thieves (Scholastic), who told a story of visiting an independent bookstore with her son and staggering to the door with a stack of books in her arms. “I will never forget that independent booksellers have been the ones to come out from behind the counter and open the door for me, so thank you so much for that.”

Elizabeth Wein’s Rose Under Fire (Hyperion) was also a Young Adult honor book. Wein talked about how her sixth book, Code Name Verity, was the first one to gain her recognition. She credited its success to the fact that indie booksellers picked it up and handsold it. “So from all of us right here, I would like to say thank you for your enthusiasm, your energy, and most of all, your evangelism in selling our books.”

Alaya Dawn Johnson also received a Young Adult honor award for The Summer Prince (Arthur A. Levine). Johnson expressed her appreciation for the party thrown for her book release by her local indie, WORD, which included a samba, biscuits, and donuts. “Thank you so much for this and for creating these magical spaces where other young readers, like I was, can find things that they love and express themselves.”

Upon accepting the Indies Choice Young Adult Book Award, Rainbow Rowell said that the earliest champions of Eleanor & Park (St. Martin’s Griffin) were independent booksellers and librarians. With their support, Rowell realized that people might read her book, despite its many rejections early on. “What I really feel like is that all of you sold it… by connecting to it,” she said. “Thank you for giving me the encouragement early, early, early on in this process and giving me that feeling that someone out there was actually going to see it.”

Jesmyn Ward, author of the Adult Nonfiction honor book Men We Reaped (Bloomsbury) spoke about the nerve-wracking experience of being nominated for a National Book Award. Ward did not invite members of her own family to the ceremony, but her publisher surprised her by inviting two booksellers from her local indie store, Pass Christian Books in Pass Christian, Mississippi.

“In that moment, it felt like a member of my family was there,” said Ward. “So thank you for being family.”

Another Adult Nonfiction honor recipient was Tom Nissley, author of A Reader’s Book of Days (W.W. Norton). Nissley discussed the many different badges he has worn at previous BEAs: an Amazon badge, an author badge, and now –– proudly –– a bookseller badge, as he is the owner of Phinney Books, which is slated to open next month in Seattle, Washington.

“There’s not much more I can say about how much I value what you do because it’s exactly what I want to do with my life also,” he said.

The winner of the Adult Nonfiction Indies Choice Award, Daniel James Brown (The Boys in the Boat: Nine Americans and Their Epic Quest for Gold at the 1936 Berlin Olympics, Viking), accepted his award via a video message, which expressed his excitement about working as a team with indie booksellers.

Anthony Marra, winner of the Indies Choice Adult Debut Award for A Constellation of Vital Phenomena (Hogarth), credited the support of indie booksellers for the success of his book. “A nonlinear novel set in Chechnya is not an easy sell, and the reason that anyone has read it is because of your support, because you championed it, you put it in people’s hands and it’s something I’m deeply honored by and grateful for,” he said.

Paul Yoon, an Adult Fiction honor recipient for Snow Hunters (Simon & Schuster), expressed his gratitude to booksellers, saying, “I don’t know how many books I have left in me, but I’ll always be a reader, so that’s something to be completely grateful for.”

Jarrett J. Krosoczka, an Indie Champion honor recipient, said that he always tries to connect an event he is doing with a bookstore, and thanked the audience of booksellers for welcoming him into their stores across the country. “I really am so thankful for what you all do,” he said. “You all helped make my childhood ambitions a reality.”

James Patterson then took the stage to accept the Indie Champion Award.

“All we can ask from people is that they do the right thing, and that they try to do the best they can, and I’m trying,” Patterson said.

“The future of our literature is in danger. There are no clear-cut villains yet, but there are no heroes either. I think it’s important that major players involved in publishing, as well as the press and our government, step up and take responsibility for the future of our literature and the part it plays in our culture. Right now, bookstores, libraries, authors, publishers, and books themselves are caught in the crossfire of an economic war between publishers and online providers. To be a teeny-tiny bit more specific, Amazon seems to be out to control shopping in our country... Amazon also wants to control bookselling, book buying, and even book publishing. And that is a national tragedy. If this has to be the new American way, it needs to be changed –– by law if necessary –– immediately, if not sooner.

“Thank you for this generous honor,” he said. “I was very emotional coming up here, more than I ever am at speaking engagements. It means a lot to me.”