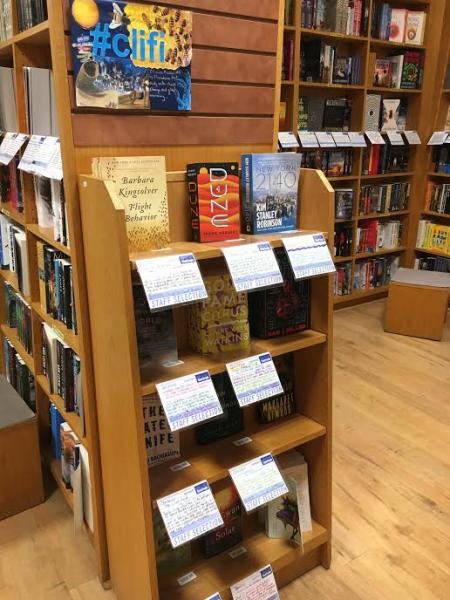 BookPeople in Austin, Texas, currently features a cli-fi endcap with the best of climate change fiction.

As a genre, cli-fi crosses the boundary between literary fiction and science fiction to imagine the past, present, and future effects of man-made climate change, allowing readers to see what life would be like on a burning, drowning, or dying planet. In recognition of this trend, Christine Havens, a bookseller/accounting department employee at BookPeople, decided in January 2018 to create her own endcap display featuring nine cli-fi titles.

Havens told Bookselling This Week her fascination with the genre began after reading and loving Kim Stanley Robinson’s New York 2140 (Orbit), which she grabbed as an ARC in 2016. The idea to create an endcap, though, came about last year, when a customer asked her whether the store had a ‘‘cli-fi’’ section; she realized they did not.

“I wasn’t aware of it being a separate genre until that one customer asked me about it,” Havens told BTW. “That was the first time I’d heard the term and the first time I was aware that climate fiction had become its own genre…I’d been looking for an idea for a better endcap display. When I was awarded my own endcap, I started off with humor books; after that I devoted the space to books about Vietnam and the Vietnam War when the Ken Burns documentary came out. But the idea here came from this customer bringing it up when I was casting around for new ideas.”

Havens told BTW she decided to create the display not just because she felt it would be a unique draw for customers, but because she wanted to get more involved with the genre and the issue. Her previous experience with similar titles, she said, were mostly reading Dune as a teenager in the ’70s and a familiarity with Oryx and Crake, part of Margaret Atwood’s classic MaddAddam Trilogy. Havens said she chose her nine endcap titles based on suggestions from the customer who had sought the genre, as well as online research and suggestions from the Chicago Review of Books’ ‘‘Burning Worlds’’ cli-fi column, the first of which features an interview with journalist/activist Dan Bloom in which he speaks about coining the term.

Havens has switched out some of the books since creating the endcap, she said, adding Blackfish City by Sam J. Miller (Ecco) and Gold Fame Citrus by Claire Vaye Watkins (Riverhead); she is also currently thinking of adding a few nonfiction titles on climate change to the display.

“We’ve done that in our history section and in our travel section as well,” she said. “For example, we’ll have a book about traveling to Venice and a novel about Venice displayed next to each other.”

According to Havens, first floor inventory manager Molly Moore, who created the endcap’s colorful sign, told her that the books on her endcap are selling so well, it’s been hard to keep the section stocked, especially when it comes to Kingsolver’s Flight Behavior. Havens described how swiftly the book has been selling in an e-mail exchange with journalist Bloom, who recently reached out to her on Twitter. 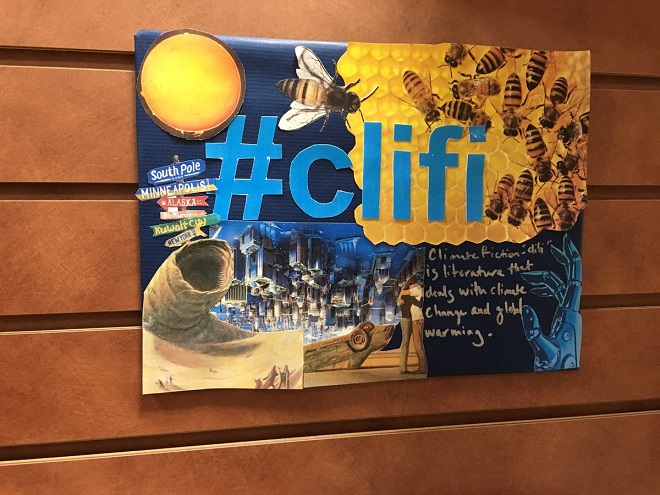 “[Flight Behavior] barely used to sell and now we have to constantly reorder, so it’s apparent that this display is popular with our customers,” she told Bloom, who posted about his conversation with Havens in his cli-fi blog, Burning Ashes. Now, she said, “my coworkers are always recommending more titles and I’m always on the lookout when I’m in the advanced reading copies room, and I listen to what customers have to say on those occasions when I’m bookselling…I love to watch people perusing the books — they’ve been quite diverse.’’

Bloom’s promotional work over the years is part of the reason behind cli-fi’s growing recognition in the public sphere, as evidenced by copious mentions of the genre in articles online. In addition to running Burning Ashes, Bloom is also active on Twitter using the hashtag #clifi and manages The Cli-Fi Report, a website for academics and media professionals that features links to articles about cli-fi.

“I coined the term ‘cli-fi’ as a wake-up call and a PR tool for climate novelists and media writers, bookstore categories and shelving, and for novelists and literary critics,” Bloom told Bookselling This Week. Over the years, he said, he has used the term to alert reporters to writing about the topic for publications including The New York Times, The Guardian, the BBC, CNN, and more. Bloom told BTW via e-mail that Foyles and Waterstones in the U.K. have also created cli-fi end caps like BookPeople’s, and he hopes that more bookstores will do the same.

“So often — too often — we as a society separate art and science and teach them as separate categories in schools, at church, and in bookstores,” he said. “Since cli-fi is a literary genre that combines climate science research with climate change novels, there’s a good opportunity for bookstores to be creative with how they set up displays for cli-fi novels.”

Havens told BTW that she has always been concerned about climate change “having grown up in the ’70s with DDT being used and pollution in Lake Erie and the energy crisis in the late ’70s, and just seeing the change in how there used to be lots of snow when I was a kid and now there’s not so much of it, how the weather patterns have changed,” said Havens. “I maybe haven’t advocated for it as much as I should have, but I have always been interested, and now seeing climate fiction being echoed in art and literature is really making me think that I need to get more involved.”

Her advice for booksellers looking to design their own cli-fi section is to constantly be on the lookout for new books. For example, she plans to read environmentalist Rachel Carson’s Silent Spring soon and is currently considering adding Dr. Seuss’ The Lorax to her endcap. 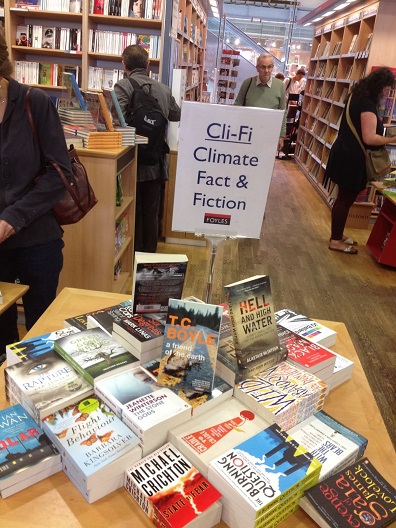 Foyles in the U.K. has jumped on the cli-fi trend, creating a climate fact and fiction display table for customers to peruse.

“My advice would be to do the research. Definitely check out the Chicago Review of Books’ “Burning Worlds” column and look online for articles by other folks because there are a lot of great people out there advocating for climate fiction,” said Havens. “Make sure to do some reading and decide what you like. Do whatever you can to make your display stand out. This has always been one of our strengths at BookPeople because we have really artistic and creative folks working here. So do something that is going to make it yours. Make sure to put it in a good traffic area and keep it maintained. And always be on the lookout for new stuff.”

Bloom had some additional suggestions for booksellers looking to engage with climate change fiction as part of their store’s repertoire, including displaying nonfiction climate science books alongside novels with climate change themes, making sure to use the cli-fi label or term in window displays and monthly book clubs, and inviting local authors to speak about the genre in-store.

Booksellers who would like to start a cli-fi section of their own can check out book lists curated by Bloom for Five Books and LitHub. Media sites like Book Riot, The Verge, and The Guardian are among many that have created top cli-fi book lists for their readers.