Booksellers Band Together as Firefighters Continue to Battle Wildfires

Booksellers in Northern California’s wine country and beyond have come together to help others affected by the wildfires that continue to rage through Sonoma and Napa counties. 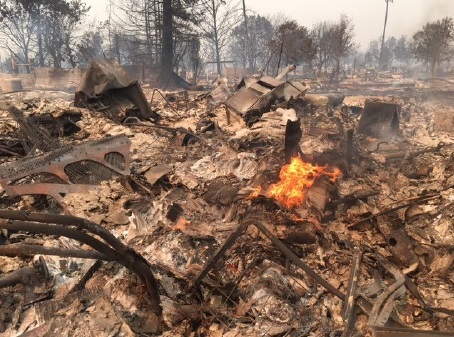 Firefighters continue to battle the deadly wildfires that have reduced parts of Northern California wine country to ash. (photo: fema.gov)

Since Sunday, October 8, deadly wildfires, arriving on the heels of Hurricanes Harvey, Irma, and Maria in the South, have besieged parts of Northern California; so far, as reported by CNN, the flames have ravaged more than 217,000 acres of land and forced thousands to make death-defying escapes from their homes. While firefighters are beginning to get the flames under control, CNN reported, at least 41 people are dead, dozens are still missing, and 5,700 buildings have been damaged or destroyed.

Book Industry Charitable Foundation (Binc) programs manager Kit Steinaway said the calls for disaster assistance from affected booksellers have been coming in briskly. Many residents who were evacuated are just now being allowed back into their neighborhoods, she said.

“We have helped six booksellers with disaster relief (the immediate need of shelter, food, and clothing), with more in the pipeline,” Steinaway told BTW. “For all of those we’ve provided with American Express gift cards for immediate needs, the cases remain open for help with expenses related to finding new housing arrangements and to help replace belongings and furnishings lost in the fires.”

Since the wildfires began, Binc has seen an increase in donations to help victims, just as the organization saw following the hurricanes, Steinaway said, proving again that booksellers are “amazingly generous and anxious to help their colleagues.” Over these past few months, the stories the organization has been hearing from booksellers have been heartbreaking, she added.

“Whether they have had their homes severely damaged in the hurricanes or completely destroyed in the fires, the scope of people’s loss is massive,” said Steinaway. “Quite a few of the booksellers we talk with say that their loss hasn’t really sunk in yet; they are still just tackling issues day-by-day. Many of the booksellers who have lost so much begin by saying to us, ‘We know there are people who need it more, so I’m hesitant to ask for help.’”

Binc is now taking disaster applications for individuals and stores over the phone or via e-mail. Booksellers can contact Binc for assistance by calling (866) 733-9064 (toll-free) or by e-mailing or texting to help@bincfoundation.org. Those who would like to help booksellers affected by this disaster can donate money to the organization.

As far as the fire’s effects on booksellers’ financial outlooks go, October is usually the busiest non-holiday month, due to peak tourism, for many businesses in Sonoma and Napa counties, so many stores have already suffered a substantial week-long business interruption. But despite their own financial hardships, stores including Napa Bookmine immediately reached out to help their communities in need.

“We are grateful for this past week to be behind us as we can now come together as a community to give what we can to help people rebuild their lost homes or livelihoods,” the store wrote in an email to customers. “The word ‘community’ keeps surfacing even in the midst of this chaos and rebuilding.”

The email went on to announce that, beginning in November, the store would be collecting money and books for people trying to rebuild their home libraries. The Bookmine also requested that customers send over the names and addresses of people they know who have lost everything so that the store could pass along a special offer: “very steep discounts” at both stores through the end of 2018. In addition, the store also staged a special evening event on Tuesday, October 17, at its Pearl Street location with a reading featuring several local authors, including Kara Vernor, Jeremy Benson (Napa Poet Laureate), and Amy Bess Cook; all book sales from the event were donated to the Napa Valley Community Foundation.

In Point Reyes, California, Point Reyes Books, owned by Molly Parent and Stephen Sparks, donated a percentage of last weekend’s sales to North Bay Fire Relief, while DIESEL, a Bookstore in Larkspur, California, and East Bay Booksellers (previously owned by DIESEL) in Oakland, have been collecting children’s books for “the thousands of children who have lost their community and home libraries.”

In an email to customers, DIESEL co-owner John Evans described the current dire situation: “The fires raging throughout Northern California have left thousands homeless. Many are staying in shelters awaiting news of their homes. Children are afraid, and bored, in the shelters, away from their homes, their pets, and their books.”

“We reached out to John and sent 2,000 books from a reserve we had from the Harvey donations, and we’re still sending books to some places in Texas,” Lennertz told BTW. “We also put out a call to all publishers, many of which are sending boxes directly to California now. And we have more to send as needed, as more books will be coming here in the coming weeks.”

Booksellers further up the West Coast are also helping out during the disaster, including the Pacific Northwest Booksellers Association, which represents bookstores in Washington, Oregon, Alaska, Idaho, and Montana. PNBA’s nine-member board announced last week that it will double its annual gift to Binc this year.

“We’re in the black and we have a rainy day fund,” Brian Juenemann, PNBA’s executive and marketing director, told Publishers Weekly. ”There’s no reason to sit on that when it can be used by someone else who really needs it. Because it could be us next time.”

Closer to home, the Northern California Independent Booksellers Association (NCIBA) will continue on with its annual fall regional show in the midst of the turmoil. Despite an interruption in planning when NCBA’s Sonoma offices lost power last week, NCIBA will present its Fall Discovery Show starting today, October 18, and continuing through October 20, at the South San Francisco Conference Center.