Writer’s Digest, a leading source of information and inspiration for writers, will celebrate Banned Books Week (September 25 to October 1) by holding a sale that will benefit American Booksellers for Free Expression (ABFE). 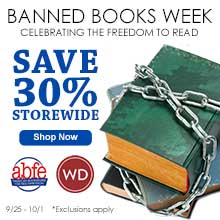 During the weeklong celebration, the publisher is offering a 30 percent discount on books and other items in the Writer’s Digest Shop and donating 15 percent of sales to ABFE. The Writer’s Digest Shop features books about writing fiction and nonfiction, perfecting grammar and punctuation, and getting published.

O’Leary, founder and principal of Magellan Media Partners, will begin his tenure at BISG on October 3, where he will succeed Mark Kuyper, who resigned from the position in August. Previously, O’Leary served as a member of BISG’s board and worked on several BISG projects, including a study of metadata in the publishing supply chain.

“For the last four decades, the book publishing ecosystem has relied on BISG for leading-edge information, standards and research… I look forward to the opportunity to continue and extend that work,” O’Leary told Publishers Weekly.

BISG’s annual meeting of members, which celebrates the organization’s 40th anniversary this year, will take place on September 30.

Every Child a Reader (ECAR), the Children’s Book Council’s charity of choice, has announced the launch of the Reading Without Walls Challenge pilot program, which encourages students to discover books outside their comfort zone.

Materials including a small poster and certificate are now available on the Children’s Book Council website for libraries, schools, and bookstores interested in participating in the campaign.

Job postings on the Amazon corporate website show the company is preparing to open another brick-and-mortar bookstore, this time in the Boston area, the Boston Globe reported.

According to the website, the company is looking to hire for nearly 20 positions for a new Amazon Books at the Legacy Place mall in Dedham, a town on the Boston border.

Amazon already has physical bookstores in Seattle and San Diego and another opening soon in Portland, Oregon. Media reports have also indicated Amazon may also be opening brick-and-mortar bookstores in New York, Chicago, and Washington, D.C.

While Amazon did not respond to the Globe’s requests for comment, Legacy Place mall’s owner, WS Development, confirmed Amazon’s plans for the store.

On Wednesday, September 21, Ingram Content Group announced that it was welcoming three new associates to the company.

Kurt Hettler is the new director of academic services at Ingram Academic Services. Hettler will oversee client relationships with Ingram’s university press and academic publishers and lead the overall strategic direction and development of specialized services for these publishers. Hettler, who joins Ingram after more than 25 years at Oxford University Press, where his most recent position was as director of publisher services, will report to Heidi Sachner, vice president of Ingram Publisher Services/Perseus Distribution/Ingram Academic Services.

Peter Antone joins the company as Ingram Content Group’s new director of marketing for Ingram Publisher Services. Antone, whose previous position was as director of consumer marketing and sales at The Tennessean and Gannett-USA Today Network, will lead the overall marketing strategy for Ingram Publisher Services and its brands, PGW, Consortium, Perseus Distribution, and Legato. He will report to the vice president of marketing, Brian McKinley.

Rachel Bressler is a new director of client relations for Perseus Distribution, also reporting to Sachner. In her new job, Bressler will oversee the relationships with Ingram’s client publishers. She most recently served as editorial director at Penguin Random House’s Plume imprint.