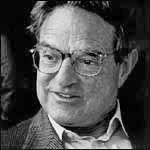 George Soros is the author of eight books, including The Bubble of American Supremacy: Correcting the Misuse of American Power (PublicAffairs); his new book will be published by PublicAffairs in the fall of 2005. Soros is the chairman of Soros Fund Management LLC and one of the world's most prominent philanthropists. He is chairman of the Open Society Institute and the founder of a network of philanthropic organizations that are active in more than 50 countries. Based primarily in Central and Eastern Europe and the former Soviet Union -- but also in Africa, Latin America, Asia, and the U.S. -- these foundations are dedicated to building and maintaining the infrastructure and institutions of an open society.

In the 1990s, ABA worked with Soros and the Open Society Institute to offer a series of Booksellers Schools in the emerging democracies in Eastern Europe.

Soros, in conversation with his publisher, Peter Osnos, will be featured at the Thursday morning Plenary Session, kicking off ABA's "Day of Education" at this year's BookExpo America.

BTW recently had the opportunity to talk to Soros via e-mail.

BTW: According to the Open Society Institute (OSI) website, you established OSI and the Soros Foundation Network to promote open societies by shaping government policy and supporting education, media, public health, and human and women's rights, as well as social, legal, and economic reform. You have also written a number of books about open societies and globalization. What drives you -- makes you so passionate about the need for open societies?

George Soros: I lived through the Nazi persecution and Soviet occupation of Hungary. When I later studied at the London School of Economics, I read the philosopher Karl Popper's book Open Society and Its Enemies. It showed that communism and fascism had a lot in common, and that they both stand in opposition to a different principle of social organization, the principle of Open Society. Both claim to be in possession of the ultimate truth. This struck me with the force of a revelation. Still later, when I had settled in the U.S. and had made more money than I needed for myself or for my family, I thought long and hard about what really mattered to me, and I decided it was this concept of open society. 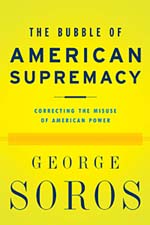 BTW: In The Bubble of American Supremacy: The Costs of Bush's War in Iraq, you posit that the country is in the grip of an extremist ideology that is changing not only the role of the U.S. abroad, but the "very character of the country." What are some of the most important examples of this ideology? Do you believe that this ideology is becoming entrenched, or might there be an upcoming backlash in response to the country's swing to the right?

GS: The most important example of this ideology is the Bush doctrine of pre-emptive military action. I would also mention some of the excesses of the USA Patriot Act. I do believe that the conservatives may be beginning to overreach, but it is difficult to predict when the bubble will burst.

GS: In the early 1990s publishing and bookselling in Eastern Europe were going through a dramatic transition. Previously state-owned publishers and booksellers were being privatized, and a new independent book industry was taking shape. A vibrant book industry is an important part of an open society. Through my foundations, I supported a program to train new publishers and booksellers in business skills. We also provided direct support for translations into local languages -- we helped translate more than a thousand titles in the social sciences and humanities into Russia alone.

There were smaller projects in 20 or so other countries, from Albania to Kyrgyzstan. Many of the publishers and booksellers we supported are now doing well on their own and are continuing to make important contributions to cultural and civic life in their countries. In Eastern Europe, they don't need outside support any more. The only place where I am currently involved in supporting reform in publishing is in Arab-speaking countries, but that is on a much smaller scale that what we did in Eastern Europe.

BTW: The Bubble of American Supremacy was published by PublicAffairs in 2004, and you have a new book coming out in 2005. Would you tell our readers a little bit about the subject of your new book?

GS: Certainly. George W. Bush's second inaugural address set forth an ambitious vision of the role of the United States in advancing the cause of freedom worldwide. In Iraq and beyond, when the President says "freedom will prevail," he means that America will prevail. This has impugned our motives and deprived us of whatever moral authority we once had in intervening in other countries' domestic affairs.

To explain what is wrong with the new Bush doctrine, I must invoke the concept of open society. This is the concept that has guided me in my efforts to foster freedom around the world. Paradoxically, the most successful open society in the world, the United States, does not properly understand the first principles of an open society; indeed, its current leadership actively disavows them.

The concept of open society is based on the recognition that nobody possesses the ultimate truth, and that to claim otherwise leads to repression. In short, we may be wrong. That is precisely the possibility that Bush refuses to acknowledge, and his denial appeals to a significant segment of the American public. An equally significant segment is appalled. This has left the U.S. not only deeply divided, but also at loggerheads with much of the rest of the world, which considers our policies highhanded and arbitrary.

We cannot forego the critical process that is at the core of an open society -- as we did for 18 months after September 11, 2001. That is what led us into the Iraq quagmire. A better understanding of the concept of open society would require us to distinguish between promoting freedom and democracy and promoting American values and interests. If it is freedom and democracy that we want, we can foster it only by strengthening international law and international institutions. --Interviewed by Karen Schechner