Four ABA member bookstores on the East Coast experienced water damage over the past week due to burst pipes, caused, in some cases, by a recent cold snap in the region that caused pipes to freeze.

On Wednesday night, January 3, a frozen pipe burst at Greenlight Bookstore’s Prospect Lefferts Gardens location, sending water pouring through the store’s ceiling. In a letter to friends, neighbors, and the media, Greenlight owners Jessica Stockton Bagnulo and Rebecca Fitting reported that the resulting damage has affected two-thirds of Greenlight’s store space and the basement offices, including the ceiling, walls, fixtures, and many books. 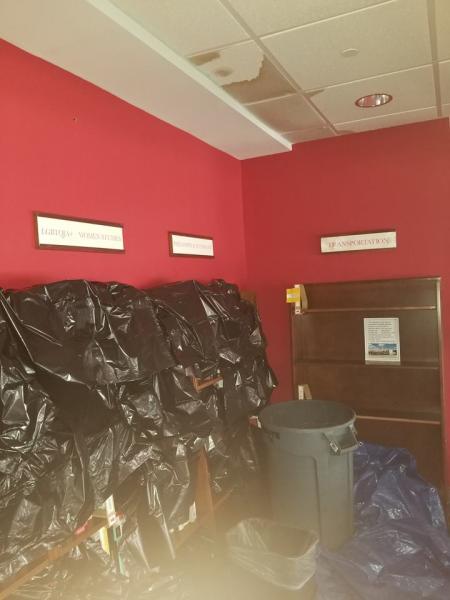 But Bagnulo and Fitting, who own another Greenlight location in Fort Greene, also noted that they have a lot to be grateful for, as staff work on drying out the store and pulling damaged books, continuing: “We’re grateful that our booksellers are rock stars — they rescued many books from the flood, preventing far worse damage. We’re grateful to the good folks on the maintenance team at the Parkside who jumped into action to help, bringing in dehumidifiers and working overnight to get the building back in shape. We’re grateful that we’ve got good business insurance, which will figure everything out eventually. And we’re grateful that we’re in a community that will understand if we look a little ragged for a while…We appreciate the support of our neighbors, and we’re grateful to you for standing with us as we weather the storms of small business life.”

The owners’ letter assured customers that the Prospect Lefferts Gardens store would be open for business starting Friday, January 5, and that all scheduled events would take place as planned.

Further south, in Raleigh, North Carolina, Quail Ridge Books faced water damage due to a burst pipe as well, though in this case, the incident was not caused by cold weather. On Sunday, a pipe inside the building above the store burst, causing Quail Ridge and many of the other businesses within the building to lose power. The store, which is owned by Lisa Poole, updated customers on its Facebook page on Monday, January 8, reporting that the building had not yet been cleared by city officials and would remain closed for now: “It is an interesting day for us. We are working hard (along with North Hills and City of Raleigh) to get everything cleaned up for you.”

The News & Observer reported on Monday that, according to Quail Ridge Events Coordinator René Martin, most of the water damage was to the building’s mezzanine level, which houses some of the store’s books and an office space. The store was able to reopen on Tuesday morning, and announced the news with an upbeat Facebook message: “WE ARE OPEN! It might be a little noisy or dusty as we continue some work but we. are. open. Please come say hi!”

‪The Facebook post also noted that the store’s event scheduled for that night with Donna Everhart, author of the new book The Road to Bittersweet, would continue as planned.

On Tuesday, January 9, yet another store experienced water damage: Eight Cousins in Falmouth, Massachusetts, which is owned by Sara Hines, Mary Fran Buckley, and Eileen Miskell. The store reported on Facebook and on its website Tuesday that it had experienced severe water damage and would be closed indefinitely, and assured that updates would be provided in both places. 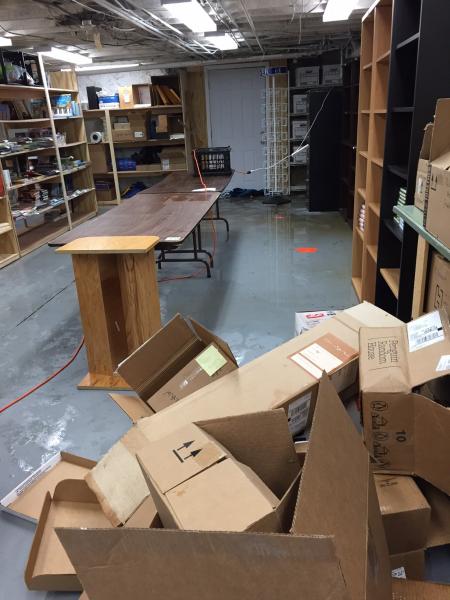 A burst pipe caused flooding in the basement of Children's Book World in Haverford, Pennsylvania.

took to Facebook to say that they believe the flooding, which caused the ceiling to collapse, had resulted from a plumbing malfunction upstairs, which may or may not be weather-related. Hines told Publishers Weekly Wednesday that the water had damaged the store’s entire stock of books; book cases were also damaged.

The store’s updates on Facebook since Tuesday have elicited a wave of customer support in the form of online comments bearing well wishes and offers to help. Eight Cousins turned to Facebook again on Wednesday to post a positive message, thanking their customers, as well as the store’s publisher reps, for their support: “All of the volunteers for help are heartwarming. We mobilized the first crew and called on the help of all our publisher reps. What a team! They are handling everything, halting shipments, contacting billing departments, and saving us hours of phone calls. Thank you! Thank you! Thank you! We value our reps so much and appreciate everything you do to help us do what we do.”

As the store continues to assess the damage, with hopes of being able to reopen at some point, Hines told Bookselling This Week, “We are overwhelmed by the show of support from the industry and the community and are working hard to answer questions. We hope to let everyone know soon what we expect the next steps to be for Eight Cousins.”

A fourth store, Children’s Book World in Haverford, Pennsylvania, also encountered a burst water pipe on Tuesday. Manager Heather Hebert said the incident at the store was not nearly as bad as it could have been; she and staff were just mostly annoyed by the situation. Hebert said she didn’t need to close the store, in part due to the location of the burst pipe.

“It happened in our basement so we got really lucky,” Hebert said. “Plus our inventory is low right now because it’s the end of the season, so it was mostly just a giant clean-up job and soggy boxes and book cases that have to be moved.”

Hebert said the store did not lose any inventory due to the flooding.