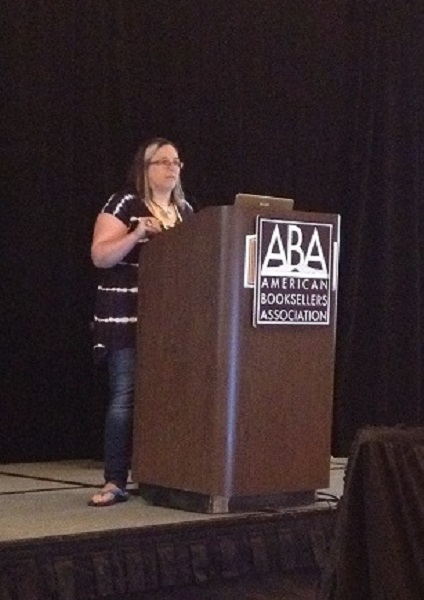 At last week’s ABC Children’s Institute, Kristen McLean, director of new business development and resident children’s specialist at Nielsen Book, shared the latest data and trends in the children’s book market during the featured talk “The U.S. Children’s Book Market: Where We Are and Where We’re Going.”

“Children’s is going to continue to grow. We’ve gotten very good at producing content for children’s, and we’re investing a lot in it,” said McLean. “Families are really investing in their children, and children are driving a lot of decision-making.”

A recent segmentation study of the children’s book market aimed to identify its most valuable customers by looking for patterns in the responses of 3,000 households in which books had been purchased within the last three months for readers in the age groups of 0–4, 5–8, and 9–12.

Respondents were then separated into the reading categories of disengaged, gamers, social omnivores, and avid readers (booksellers’ current core customers).

McLean focused on the age group 5–8, as it accounts for almost 40 percent of children’s book purchasing. Within that group, avid readers accounted for 27 percent of overall book buying and social omnivores accounted for 20 percent.

“Social omnivores is the most interesting group because it has the biggest potential for us to grow our customer base. These guys love everything: they love books, they love games, they love TV, they love radio, they read magazines. But it also means that their attention is very divided,” said McLean. “These families appreciate help and will gravitate towards environments where they can find good recommendations, where people remember their names and know their children.”

In a comparison of reading groups in the 5–8 segment, McLean noted that avid reader households are slightly more likely to have a non-working parent and are likely in more rural areas. Social omnivore households tend to have a higher income and two working parents; are more educated and more urban; and are more multicultural.

Ninety-two percent of the total growth of the U.S. population from 2000 to 2014 has come from people with multicultural backgrounds, McLean added. Generation Next, which comes after the Millennial generation, is 50 percent nonwhite.

“This whole question of needing multicultural books, which is bubbling up through the culture and political cycle, has to do with underlying factors of demographics shift,” said McLean. “It’s important for us as booksellers to think about this even if we’re in a community that has not made this shift yet.”

In today’s visual environment, one of the hottest content trends in fiction is comics and graphic novels, said McLean. The category is being led by hybrids, where images are integrated into text, such as the Dork Diaries series by Rachel Renee Russell (Aladdin). “If you’re an independent bookseller who hasn’t really invested in this area for kids, there’s now significant volume and interest in titles in this category that you can bring in something that feels like a real section.”

McLean also advised booksellers to keep their eye on books featuring girl power. “This is not girly power, this is straight-ahead, new wave feminism for kids,” she said. Themes of girl power are cropping up in comics and graphic novels, including such series as Lumberjanes by Noelle Stevenson (BOOM! Box), Cleopatra in Space by Mike Maihack (Graphix), and Zita the Spacegirl by Ben Hatke (First Second).

“Love it or not, I think it’s being driven by the political cycle. The fact that we have a woman on the ticket for the presidential race is going to continue to build interest and inspire people to buy these types of books this season,” said McLean.

In nonfiction, the category of toys, dolls, and puppets is popping, said McLean; this includes Lego guides for Star Wars and DC Comics superheroes. Also popular in what McLean calls “active nonfiction” are computer books on coding for kids; in humor, joke books; for study aids, Brain Quest; and in technology, the number-one book is the Dummies Junior book Making YouTube Videos by Nick Willoughby.

“What we’re really seeing here is kids driving interest in nonfiction that reflects their interests. These are not parents buying books to hand out to their kids, these are the kids having an interest and requesting the books or parents buying books to speak to that interest,” said McLean. Outside of the book industry, kids are becoming very active and engaged in a variety of areas, including entrepreneurship, invention, and activism.

Nonfiction is an ideal investment because it generally holds both a higher price point and a higher perceived value, McLean said. In addition, 25 percent of juvenile nonfiction is being bought by adults for themselves.

Indie booksellers, who have already seen steady growth in children’s nonfiction purchasing over the last four years, can dominate in this area, said McLean. “In terms of who has market strength in this area in the bricks-and-mortar space, you guys have it. You can really differentiate yourselves in this area and tailor it to your specific communities based on what kids are telling you they’re interested in,” she said.

McLean also shared the initial results of a study on the rise and decline of series fiction. Looking at the mid-list series Owl Diaries by Rebecca Elliott (Scholastic), sales of the first book in trade paperback were steady, but books two, three, and four saw big spikes in sales when they were published before leveling out.

“If we dig into different kinds of series, we’re going to see some different patterns,” said McLean, who confirmed that Nielsen will move forward with studies of series fiction.

BookScan collects data from a variety of reporting retailers. ABA members can learn more about reporting to BookScan here.